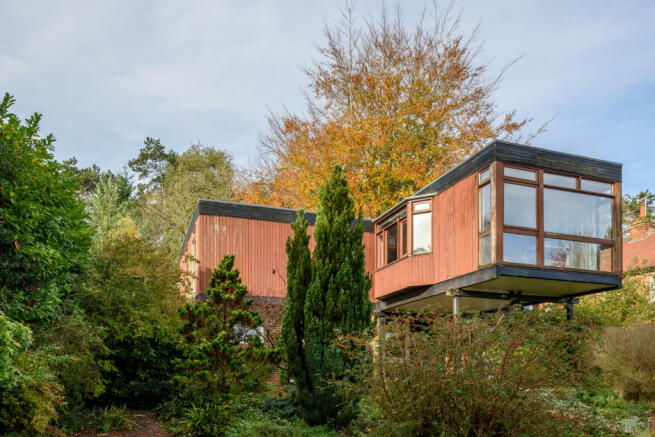 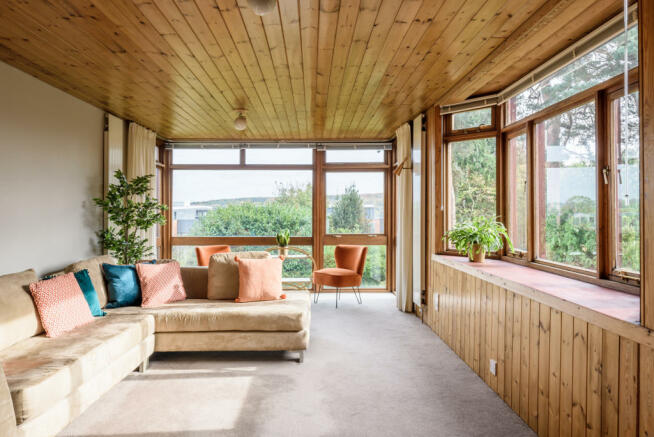 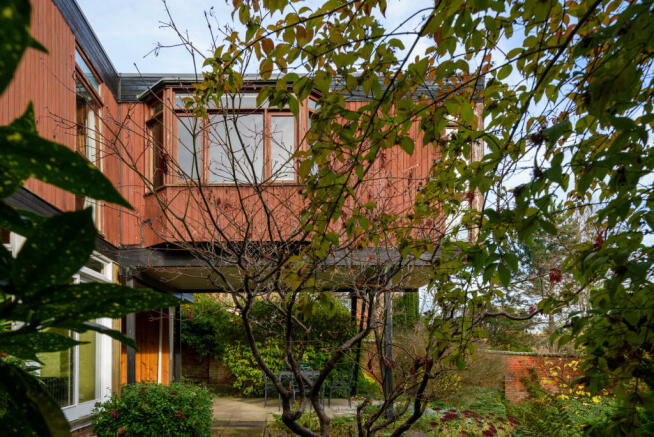 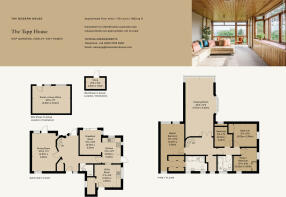 A striking four-bedroom house, designed and built in 1969 by the architect David Tapp for his family. Located at the end of a private driveway, the house is surrounded by a large mature garden and is just a short walk from the centre of Henley-on-Thames and the river. With an emphasis on large swathes of glazing the house is particularly notable for its dramatic raised living room, its qualities of light and the wonderful blurring of the lines between internal and external space. The sitting room which sits on timber girders is not only a striking addition to the house, which creates a floating living space, but it also preserves a usable outdoor space underneath.

The design employs an innovative prefabricated system developed by Tapp with Fredericks Timber based on standard modules; a method used by the architect in several of his subsequent projects.

Entry is at ground level to a generous central hallway with original quarry-tiled floors and timber-clad ceilings and walls; a palette of materials which is repeated throughout the house. To one side of the front door is a decorative, abstract mural.

A flexible space, intended as a dining room, occupies the plan to the left, with original deep-red lino flooring and its own access to the garden. On the other side of the entry hall is a corridor which leads, past a guest WC, to the kitchen. This has been recently updated with new cabinetry and worktop, and open shelving. Quarry tiles are used here again and are set against timber-clad and exposed-brick walls. A perfectly placed picture window frames views of the garden and within an adjacent breakfast room, floor-to-ceiling glazed doors open onto the terrace beneath the floating sitting room and onto the garden. Opposite there is a generous utility room with a door leading outside. Here there is also a large, light, space which could be used as a separate home office/studio space lit from above through a skylight.

A beautiful spiral staircase, composed of sections of slotted plywood, ascends to the first level, lit by a round skylight above. Here, the expansive living room is bathed in light throughout the day through floor-to-ceiling glazing that frames easterly views over Henley and the Hambledon Valley, and a large bay window that spans the length of the room. Adjacent is a master bedroom, with walk-in wardrobe and an en-suite bathroom with original 1960s tiles. There are three further bedrooms on this floor and a shared family bathroom.

The sizeable garden wraps around the house entirely and has beautifully planted borders as well as fruit trees and stretches of lawn. The original Victorian red-brick wall envelopes the garden. Towards the back of the garden is a separate annexe which could also be used as a workshop. There is also a shed.

Henley is a town of charming medieval streets peppered with Victorian and Edwardian architecture lining one of the most beautiful stretches of the Thames. It has an excellent range of boutiques and art galleries, a three-screen cinema, theatre and several very good restaurants and pubs. The town comes alive in the summer months for The Henley Royal Regatta and Henley Festival of Music & Arts. Nearby Marlow provides a further range of attractive facilities.

There are several good gastro pubs all within 20 minutes including The Hand & Flowers and The Coach in Marlow (both Tom Kerridge), The Five Horseshoes in Maidensgrove, The Dew Drop Inn and Hurley Hotel in Hurley, and The Dog & Badger in Medmenham. Orwell’s pub and restaurant on Shiplake Row is a firm local favourite.

Henley Station is around six minutes walk from the house and offers direct services to London Paddington in approximately 45 minutes. The M4 is easily reached for access to Heathrow (around 30 mins by car), London (just over an hour), and the West Country. There are several highly-rated schools within close proximity, both state and private and for all ages.

Disclaimer - Property reference TMH78356. The information displayed about this property comprises a property advertisement. Rightmove.co.uk makes no warranty as to the accuracy or completeness of the advertisement or any linked or associated information, and Rightmove has no control over the content. This property advertisement does not constitute property particulars. The information is provided and maintained by The Modern House, London. Please contact the selling agent or developer directly to obtain any information which may be available under the terms of The Energy Performance of Buildings (Certificates and Inspections) (England and Wales) Regulations 2007 or the Home Report if in relation to a residential property in Scotland.