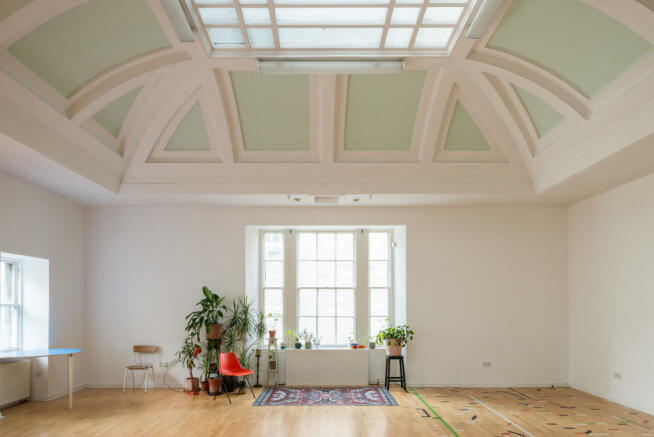 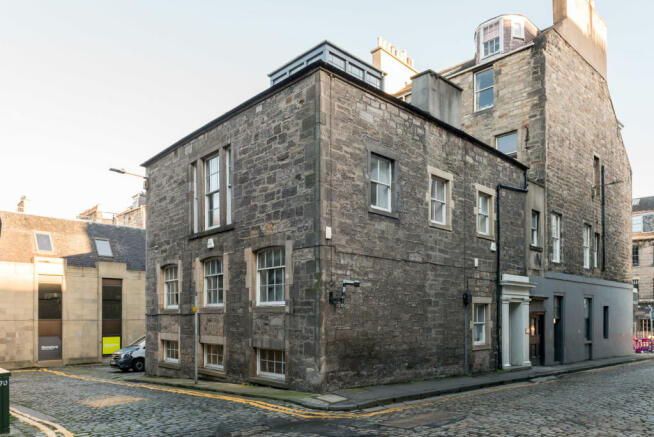 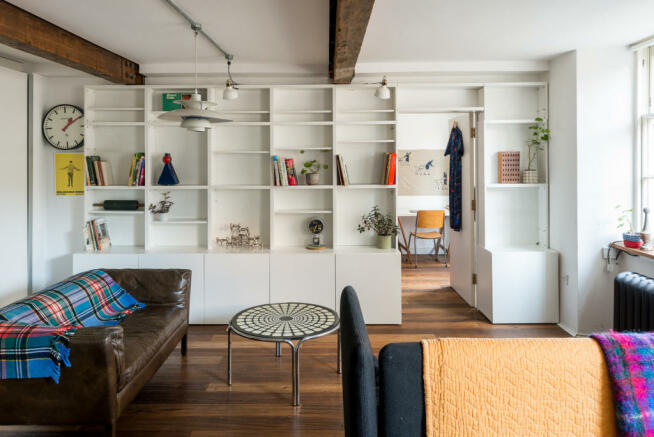 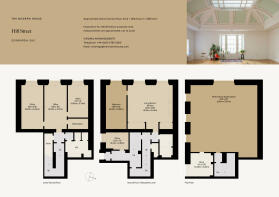 Occupying a quiet position in Edinburgh’s city centre, Hill Street is an exciting live/work space of over 3,180 sq ft, set across three storeys of a Category B-Listed house. In addition to the primary living space, an impressive double-height studio with a nine-foot high cupola and coved ceiling spans the entire first floor. The highlights of the city centre are on the doorstep, whilst Edinburgh Waverley train station and Edinburgh Castle are approximately ten minutes’ walk away.

Located on the corner of Hill Street, the private entrance is positioned at the front of the building, with two private car parking spaces allocated nearby. A central staircase leads up to a breath-taking space on the first floor; a former 1850s dance studio with exceptional acoustics, an ornate glass ceiling and a trio of south-facing sash windows, inviting a wonderful quality of natural light. Playful interior interventions are paired with impressive classical proportions, with a reclaimed gymnasium timber floor running underfoot, and pivoting walls providing flexible divisions.

A beautifully light apartment is positioned at ground level, comprising of a bespoke kitchen and an open-plan living area with in-built bookcases and a generous provision of storage. Cast-iron radiators rest beneath large sash windows and oiled floorboards run throughout. The bedroom sits neatly to one side of the living area, with a small office and two bathrooms also on this level.

The lower-ground floor of the house is currently organised as office space, drawing a secured rental income; occupied by commercial tenants on a flexible tenancy arrangement. Separate bathrooms and a kitchenette service this level.

Hill Street is incredibly well positioned for the highlights of the city centre and its exciting independent food scene. Edinburgh’s four Michelin-star restaurants are easily reached on foot, as are the popular eateries Timberyard, The Little Chartroom, Edinburgh Food Studio and Scran and Scallie in neighbouring Stockbridge.

Edinburgh is equally well-regarded for its year-round programme of cultural activity, world-class exhibitions and music events, an emerging art and design scene and the city’s world-class Fringe festival. The East Lothian coastline and exceptional beaches at Seacliff and Tyningham, are easily reached in under an hour by car.

The area has a rich picking of both public and private schools, including Loretto, George Heriot’s, Edinburgh Academy and Edinburgh’s Boroughmuir High School, ranked Scotland’s best state school by The Times for 2019.

National rail offers direct routes from Edinburgh Waverley to Kings Cross and Edinburgh’s International airport is just a twenty-minute journey by car or around 30 minutes by tram.

Disclaimer - Property reference TMH78452. The information displayed about this property comprises a property advertisement. Rightmove.co.uk makes no warranty as to the accuracy or completeness of the advertisement or any linked or associated information, and Rightmove has no control over the content. This property advertisement does not constitute property particulars. The information is provided and maintained by The Modern House, London. Please contact the selling agent or developer directly to obtain any information which may be available under the terms of The Energy Performance of Buildings (Certificates and Inspections) (England and Wales) Regulations 2007 or the Home Report if in relation to a residential property in Scotland.