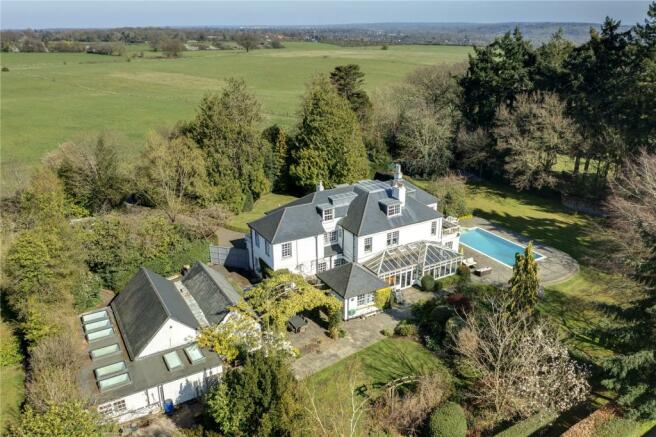 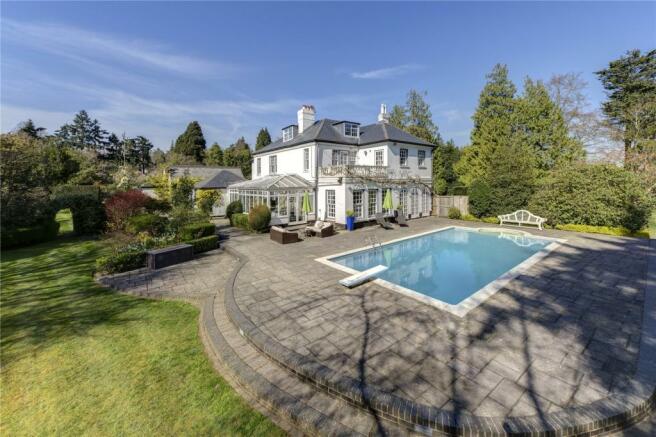 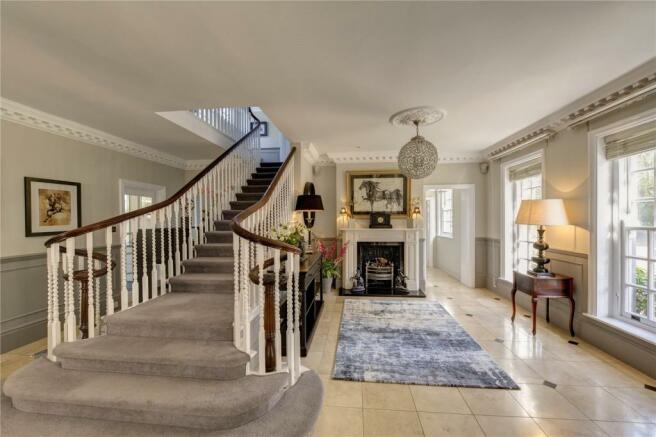 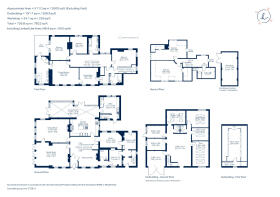 The house has an appealing front elevation with painted render under a tiled roof. Built in the late 1800’s, it provides versatile and spacious accommodation which is ideal for modern family living with the benefit of a heated open air swimming pool and a level, well maintained garden. The attractive, rural surroundings are peaceful yet within easy reach of Chorleywood Station at a distance of 1.4 miles and the M25 Junction 17 just under a mile away.


The house is entered through a lobby into the impressive entrance hall with a tiled floor and wide central staircase with curved balustrades on both sides. There is original decorative cornicing and ceiling roses featured through most of the ground floor. To the left, the drawing room is a generous size with three arched French doors out to the terrace and swimming pool with the garden beyond. A magnificent, ornate fireplace surrounds the open hearth. The dining room has an oak floor and views though sash windows to the pool and garden. A door to one side leads back to the drawing room. The kitchen was completely re-fitted in 2020 with a range of gloss fronted, flush fitting units including an island with granite work surfaces. Appliances include a gas fired AGA, separate induction hob and electric oven, a fridge freezer, a dishwasher and a stainless steel sink. There is a breakfast area and seating in the conservatory section of the kitchen. An adjacent large utility room has plumbing for several free-standing appliances and a Megaflow hot water system. From here, a boot room leads into a lobby with a door to the front courtyard and gardener’s WC to one side and the second staircase. This side of the house was previously incorporated a separate dwelling but is now fully integrated into the main house, but retains an independent front door access. A passageway leads back into the main hall via a study area and guest cloakroom. The curved staircase rises to the first floor landing, from where the principal bedroom has a dressing area and en suite bathroom with a bath, separate shower, two basins and a WC plus a door out to a balcony. A double bedroom has access to the same balcony and views over the pool and garden. There is a further double bedroom plus a family bathroom with a shower over the bath, basin in a vanity unit and a WC and plus a separate shower room, also with basin and WC. A second landing gives access to another double bedroom and a secondary staircase down to the lobby. Returning to the main landing, a staircase rises to the top floor which has two large rooms under the eaves, one with a pretty, original fireplace, both of which are suitable as bedrooms or an au pair suite. There are also two very large, easily accessible loft/storage rooms.
Outside

The sweeping carriage drive at the front of the house is edged with box hedges, an area of lawn and mature trees giving privacy. Extensive gardens with terrace areas including a heated swimming pool 10m x 5.5m : (with plant house and boiler for central heating behind shrubbery). The level section of lawn beside the pool was previously used as a grass tennis court. A summer house has power supply. There is a feature wall constructed from logs in front of the boundary fence. The perimeter of the plot has panel fencing which is screened by mature shrubs and small trees. There is an al fresco dining area with a pergola above for BBQs. An area of hard standing is concealed behind a hedge with a workshop and metal frame greenhouse.

There are several outbuildings next to the house, principally the original coach house and stables which have been upgraded to garages and storage but finished to a high standard and formerly used as offices but capable of many uses including its present use as garages, storage and a home gym.

The property is situated in a highly desirable semi-rural setting within the private Heronsgate estate, 1.4 miles from the centre of Chorleywood which offers a good selection of local suppliers, including a butcher, baker, bookshop and newsagents, combined with a variety of cafes and restaurants. A wider selection of shopping is available in Watford. Heronsgate was founded by Feargus O'Connor and the Chartist Cooperative Land Company in 1846. In addition to the original 35 plots of land covering 103 acres, a beer house was provided, now the Land of Liberty, Peace, and Plenty public house. It is today a much sought-after village with a social committee which arranges annual carols by candlelight, fireworks and other social events. The heart of the village is much in its original state and the Land of Liberty, Peace, and Plenty stands as it was, along with the church and Chartist hall. It is particularly popular with families for its secluded and safe environment, with easy dog walking and a strong neighbourhood feel. Chorleywood station is in the town centre and usefully provides both the Chiltern Line services to London Marylebone and Metropolitan Line Underground services to Baker Street and The City. There is an excellent selection of local schools, both state and private, with the mixed St Clement Danes School, Merchant Taylors School for Boys, the Royal Masonic School for Girls and the Watford Grammar Schools. Chorleywood Common is worthy of special mention, encompassing 200 acres of wooded common land. Chorleywood golf course maintains a nine hole course on the common as well as the Chorleywood Cricket club. Moor Park golf course and The Grove, one of South East England’s top Country Clubs and golf courses, are a short drive away.

Disclaimer - Property reference RIK210046. The information displayed about this property comprises a property advertisement. Rightmove.co.uk makes no warranty as to the accuracy or completeness of the advertisement or any linked or associated information, and Rightmove has no control over the content. This property advertisement does not constitute property particulars. The information is provided and maintained by Hamptons Sales, Rickmansworth. Please contact the selling agent or developer directly to obtain any information which may be available under the terms of The Energy Performance of Buildings (Certificates and Inspections) (England and Wales) Regulations 2007 or the Home Report if in relation to a residential property in Scotland.