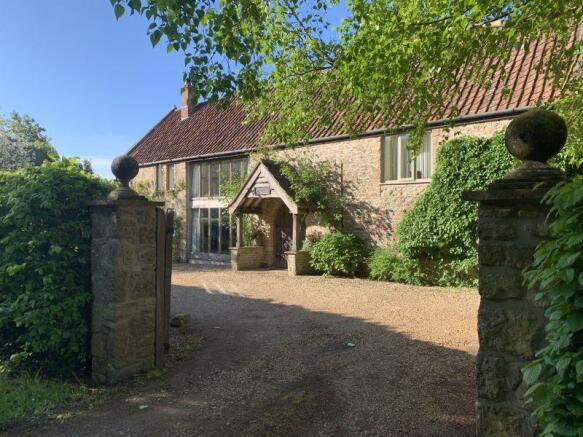 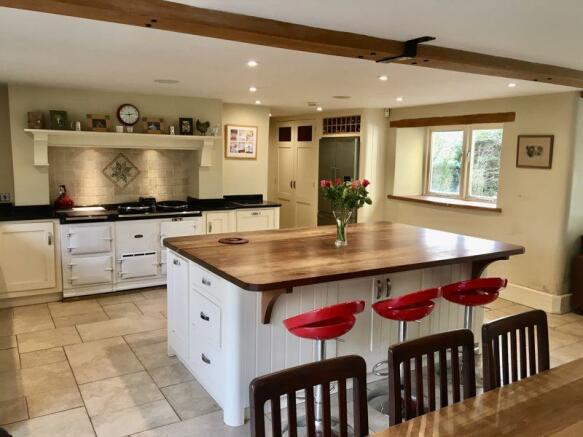 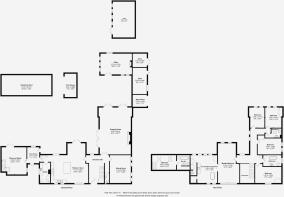 Converted from a barn in the late 1980's, Greenscombe House is believed to date back to the early 19th Century. The property is located 1.5 miles north of Bruton close to the village of Batcombe. The house has been extensively updated during the last 18 years by the present owners creating a superb family home.
The property has attractive stone elevations with feature arrow slits under a clay tiled roof.
A porch with a Grand Welsh Chapel door leads through to the Entrance Hall. An oak staircase rises to a galleried landing. From the hall there are double doors that take you through to the drawing room which is a lovely large space with oak flooring, a large stone surround fireplace with a wood burner, two sets of French doors and a set of bifolding doors letting so much light into the room and all lead out to the terraces.
The Dining room has an oak floor and two double windows. Both rooms have radiators with radiator covers.
The other side of the entrance Hallway is the...

From the Playroom/Study, there is a staircase to a bedroom with an en suite bathroom with a roll top bath. These two rooms could create a separate annexe.
From the main oak staircase in the Entrance Hall there is a galleried landing. The Master bedroom is a large double aspect light and airy room with full length glass windows and oak flooring. A double width opening leads to the bathroom/dressing room where there is a roll top bath and a separate tiled shower. There are many built in wardrobes.
The second largest bedroom is to the right of the stairs at the front of the house it has an easterly facing window and gets the morning sun.
There are three further bedrooms (2 with built in wardrobes) and a further bathroom and a wet room.
At the far end of the landing there is a loft hatch with a pull down ladder.

The house is tucked away down a two-hundred-metre track positioned between the original farmhouse and a granary, now a converted barn. The house is approached through two stone pillars with wooden gates flanked by beech hedging into a gravelled driveway. To the right hand side of the house there is a further gravelled area that leads to a five bar gate giving access to a wood store, a workshop and also a mower shed.
At the rear of the house across the terrace there is a further building which was developed some twenty years ago. It is approached up some steps and has a porch and double doors. It has an oak floor, a fireplace with an oak mantle and wood burner and triple aspect windows. This room can be used for a variety of uses including an Office, TV room, a Gym or a Teenage Den.
The large terrace leads on to the formal lawn which is edged by mature borders. There are a series of further compartments to the garden including a vegetable garden, croquet lawn and a small...

The popular town of Bruton is just 1 ½ miles to the south and has a range of local shops, a smart restaurant called 'At the Chapel' and more recently the addition of 'Hauser and Wirth'; a world renowned art gallery including exhibitions, a beautiful garden designed by Piet Oudolf and a fantastic restaurant. There is also a new restaurant called Osip which has a Michelin star in Bruton High Street.
Another nearby destination is Babington House, the private members club. The market town of Frome is approximately 9 miles to the north and has extensive amenities including shops, boutiques as well as two theatres, a cinema, restaurants and cafes. The Georgian city of Bath is just over 20 miles away and the regional centre of Bristol is approximately 24 miles away. Nearby Castle Cary boasts a train station with direct links to London Paddington or there are trains from Gillingham direct to London Waterloo. The A303 can be joined just to the south providing a link...

The house is well placed for many of the West country's well known independent schools including Bruton School for Girls, Kings Bruton, Downside, Millfield, Sherborne, Wells Cathedral, Hazlegrove, Port Regis and All Hallows. Bruton and Upton Noble Primary Schools are also close by as well as Ansford Academy.

From the High Street in Bruton, turn left into Coombe Street and continue for 150 meters and then turn right signposted Batcombe. Continue for 1 ½ miles until you come to a staggered crossroads. Turn left at the crossroads and some 500 meters further on, turn left onto a private track. Greenscombe House will be found 200 meters on the right. 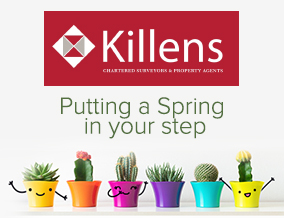 Local, Experienced and Proactive
Property is our passion and  we are here to help.

If you are thinking of selling or buying a property then we are here to help.

Whether selling a country house, cottage or paddock, we adopt the same philosophy to give the best advice based on experience, local knowledge and research.

At all times, our skilled professionals aim to provide a high quality services with traditional values yet adopting modern meth

Disclaimer - Property reference 10182989. The information displayed about this property comprises a property advertisement. Rightmove.co.uk makes no warranty as to the accuracy or completeness of the advertisement or any linked or associated information, and Rightmove has no control over the content. This property advertisement does not constitute property particulars. The information is provided and maintained by Killens, Wells. Please contact the selling agent or developer directly to obtain any information which may be available under the terms of The Energy Performance of Buildings (Certificates and Inspections) (England and Wales) Regulations 2007 or the Home Report if in relation to a residential property in Scotland.