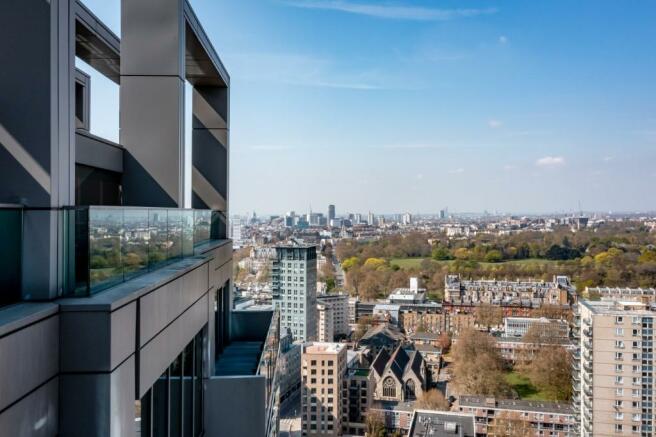 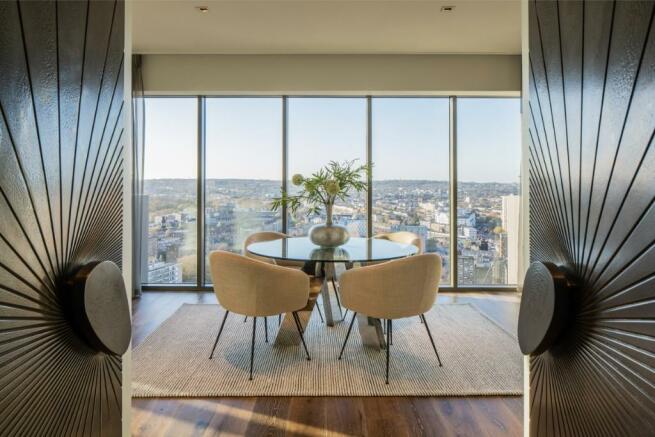 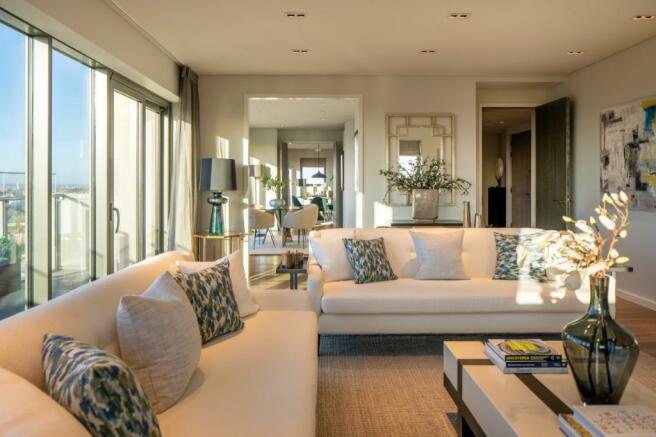 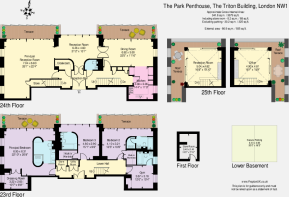 The word Penthouse brings to mind far reaching views, generous outside space and the feeling of quiet solace from the restless energy of the streets below. Ideas of privacy, luxury and convenience.

The Park Penthouse evokes all of these emotions. It holds a prominent position across the top three floors of a unique twenty-six storey structure, its large scale woven pattern defining the building's facade, conceived as a piece of sculptural art by Stephen Marshall Architects.

The apartment's calm neutral interiors offer the perfect juxtaposition to the aluminium and glass exterior of the building. As the sun moves around the building through the course of the day, it illuminates the skyline during the morning, and then in the afternoon and early evening, bathes the apartment in a warm glow.

A high speed passenger lift moves residents directly from the underground car park to the 24th floor, where an oversized limed English oak front door does little to convey what lies beyond. The penthouse opens to reveal a generous hallway, where a pair of custom designed, bespoke finished metal doors frame the far reaching views of the horizon, through an expanse of floor to ceiling windows.

The twenty-fourth floor of the apartment is dedicated entirely to an expanse of entertaining space. The seamless flow between the rooms is punctuated by access to two large terraces, with views over Regent's Park and beyond.

The twenty-fifth floor is home to two separate skyrooms. Two glass walls and a panelled glass ceiling give both of these rooms a feeling of the outside brought in, further enhanced by their own private terraces. Each skyroom is accessed via its own dedicated staircase, allowing for maximum privacy.

The twenty-third floor is reserved for bedroom accommodation, creating quiet private spaces to retreat to. The principal bedroom occupies a third of the floor space, with its own dressing room and terrace. All of the other bedrooms have en-suite bathrooms, and bedroom two also has its own private terrace. Bedroom four is currently used as a home gym, with a stunning view of the city of London.

The Triton Building forms part of the Sir Terry Farrell master plan of Regent's Place, a mixed use scheme bordering Regent's Park to the west, Kings Cross to the east and both Marylebone and Fitzrovia to the south. All four of these London neighbourhoods are within a mile of the Penthouse, and between them every conceivable desire is catered for.

The King's Cross regeneration is one of London's greatest success stories. With Thomas Hetherwick designed Coal Drops Yard as its centrepiece, it's a wonderfully eclectic mix of independent stores, outposts of well known London restaurants such as Dishoom and Barrafina as well as being home to the world renowned design and art college, Central Saint Martins.

Marylebone and Fitzrovia provide more established, historic neighbourhoods with their mixture of Michelin Star restaurants (there are close to 30 within a two mile radius of the Penthouse), luxury retail and two of London's most sought after boutique hotels, the Chiltern Firehouse and the Charlotte Street Hotel.

Regent's Park is one of London's eight Royal parks, with nearly 400 acres of open space, including ZSL London Zoo and the Open Air Theatre.

I founded Simon Deen Real Estate to focus on what I consider to be the most important factor in a successful transaction - the strength of the relationship between an advisor and their client.

Having lived and worked in London my entire life, I have nearly 20 years of experience across multiple property disciplines and an extensive network of contacts built over that time. With an established track record, I now work in close partnership with select clients, strategically working toward

Disclaimer - Property reference TPP. The information displayed about this property comprises a property advertisement. Rightmove.co.uk makes no warranty as to the accuracy or completeness of the advertisement or any linked or associated information, and Rightmove has no control over the content. This property advertisement does not constitute property particulars. The information is provided and maintained by Simon Deen Real Estate, London. Please contact the selling agent or developer directly to obtain any information which may be available under the terms of The Energy Performance of Buildings (Certificates and Inspections) (England and Wales) Regulations 2007 or the Home Report if in relation to a residential property in Scotland.