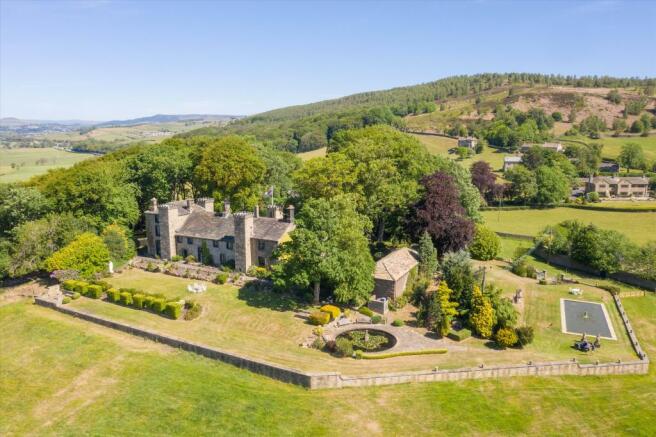 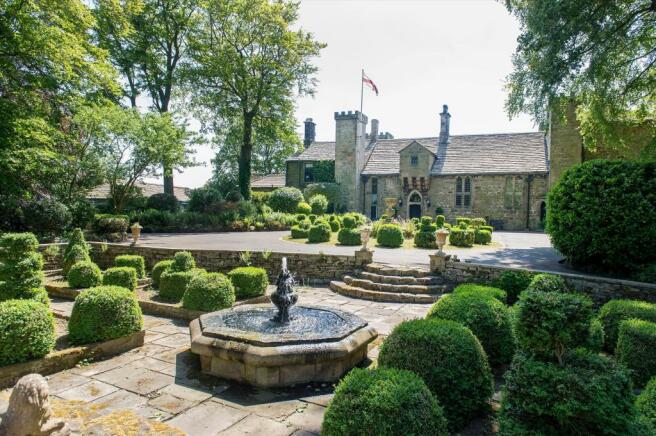 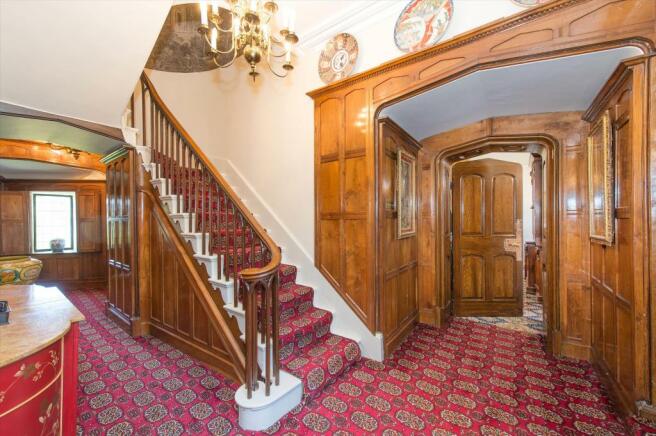 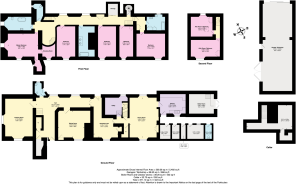 Four embattled turrets flank the angles and above the Regency entrance is a machicolated garret. The Living Room features a large elliptical-headed fireplace and woodwork circa the 1920's by the much-hailed Robert Thompson of Kilburn - the 'Mouseman' - and there are said to be 8 carved mice secreted about the room.

The Hall has recently been restored by the current owner creating a stunning home steeped in history.
Farnhill Hall is located in High Farnhill, on the western outskirts of the village, and is surrounded by its own land which includes grazing land and an established private Walled Garden - the total site area extends to circa 15.64 acres, with the Hall and its immediate more formal grounds and gardens extending to around 2.66 acres.

The grounds gently lead down to the canal offering lovely waterside walks within your own private grounds.
The principal rooms are situated to the rear of the Hall, giving them a lovely southerly aspect over the land, across to the nearby Leeds-Liverpool Canal and then to the hills of the Aire Valley beyond.

Farnhill Hall is approached by an impressive tree-lined tarmac driveway leading to the detached garage (would garage 4 vehicles) with double sliding access doors to both the front and side and a courtesy door to the cobbled courtyard where there is a range of outbuildings - there are five stone outhouses, and a boiler house with a disused oil tank and Vaillant gas-fired boiler (installed in 2013).
The immediate gardens were landscape designed and feature a turning circle in front of the house with a sunken garden, to the side of which are less formal gardens to the west, with pathways leading to the lawned south-facing gardens which feature a haha looking across the grazing land to the canal below. To the east there is a level former croquet lawn and secluded seating area with pond.

Farnhill is a popular Aire Valley village situated alongside the Leeds-Liverpool Canal midway between Keighley and Skipton, with its own beautiful moorland and good access to the Yorkshire Dales. Adjoining Farnhill is the small village of Kildwick which has a public house, church and a highly regarded primary school. Just a short distance by car is Cross Hills with local amenities including various shops, restaurants, health centre and secondary school, and Skipton is 5 miles away with a wide range of shops, social and sporting amenities. Farnhill is less than 2 miles from both Cononley and Steeton/Silsden railway stations which provide regular train services to Bradford, Leeds and London Kings Cross. 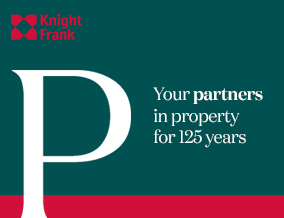 Disclaimer - Property reference HAR012074469. The information displayed about this property comprises a property advertisement. Rightmove.co.uk makes no warranty as to the accuracy or completeness of the advertisement or any linked or associated information, and Rightmove has no control over the content. This property advertisement does not constitute property particulars. The information is provided and maintained by Knight Frank, Harrogate. Please contact the selling agent or developer directly to obtain any information which may be available under the terms of The Energy Performance of Buildings (Certificates and Inspections) (England and Wales) Regulations 2007 or the Home Report if in relation to a residential property in Scotland.