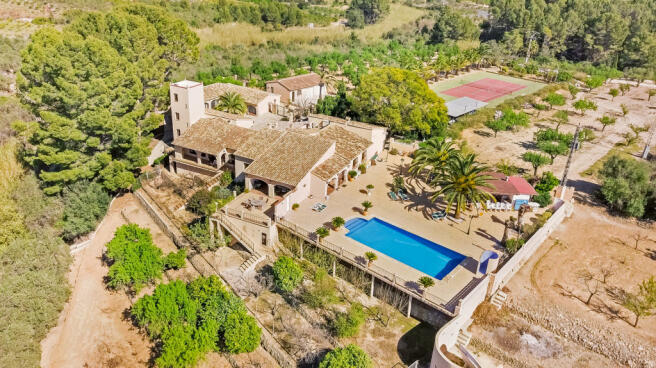 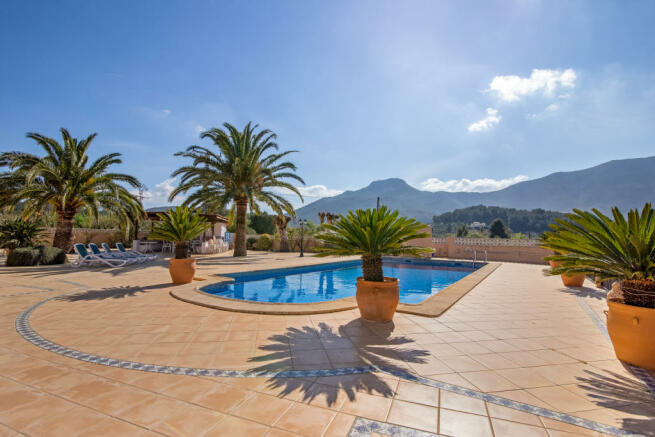 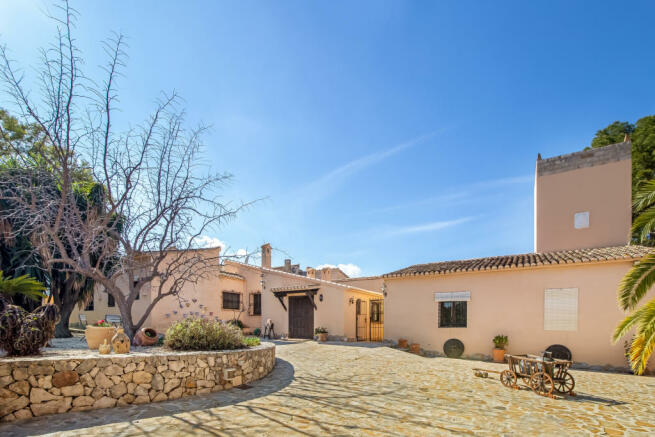 Finca La Asmoladora is roughly 43,300 square metres in size. It is located halfway between the two small pueblos of Alcalali and Parcent.
It is a haven of peace and quiet surrounded by spectacular mountains on three sides.
It comprises the main old Finca Estate house: You will find the Main House both interesting and impressive. It has three large bedrooms, three bathrooms, a large kitchen and "plaza mayor", dining room and very large living room.
The Finca's guest property/accommodation comprises Casa Andrago and other three Casitas. Casa Andrago comprises a Guest House, which sleeps four, and its interconnected Tower which sleeps a further four. The Casitas are small self contained villas arranged round the finca's impressive stone paved courtyard close to Casa Andrago. The smallest Casita is arranged studio style and is set up to sleep two. The next largest has a separate bedroom and is also set up to sleep two. The largest Casita has two bedrooms and is set up to sleep four.
In total in its normal configuration the guest accommodation is set up to sleep up to 16 people - but with the provision of extra single beds, can and very often does, sleep up to 20 guests.
The Finca has a huge pool sized for around 30 people. It also has a vast tiled pool and barbecue terrace which has been used many times for large wedding and parties of all sorts - ranging from birthday parties to Golden Wedding parties. As the nearest neighbour is 200 m away the Finca is ideal for entertainment as loud music does not disturb anyone. The Finca has its own tennis court and basketball facilities.
The Finca's 16 acres of land are planted to vines, fruit trees, almonds, olives etcetera. A river runs through the property which is crossed by a number of the Finca's private paths. There are Roman remains in the Barranco of the river. The property also includes a small finca - Finca Amagada ("Hidden finca") - which has been partially restored and is used for the preparation and storage of wine and olive oil. This Finca comprises some 4000 m2. It could be sold/redeveloped separately as it has metered water, it own well and adjacent electricity and telephone lines.
The guest accommodation can be rented individually or in combination. Rentals are year round. In the Autumn, Winter and Spring months, the majority of rentals are to guests taking part in mountain related activities - climbing, cycling and walking/hiking. In the summer months the guest accommodation of the Finca is rented in its entirety by large groups of typically 14 - 20 wanting to rent the whole of the Finca for vacations or for special events - eg weddings, parties, celebrations etcetera. Rental income brings in around €35,000 per annum gross. Currently the Finca is a spectacular family home/estate plus with high quality separate rental properties for outside guests. The property could also be used as a residential conference facility or as a retirement home or as a large family home sleeping anything up to 25 - 26 people.
The property is full of character including many rustic and other antiques collected by the present owners from all over the world - but mostly from the Spanish speaking world, so the items are fully in keeping with the Spanish character of what it is - an old Spanish finca.

Find your perfect home in Spain.

Search our diverse property portfolio across

Meet the team: Blue Square is an innovative estate agency with offices throughout Southern Europe from Monaco to Marbella. Our brand is built around the idea that experiences are everything.

Our experts are locally based with exceptional market knowledge, and they have access to a comprehensive range of properties.

This is a property advertisement provided and maintained by Blue Square Spain S.L., Moraira (reference ES-CAL-015575) and does not constitute property particulars. Whilst we require advertisers to act with best practice and provide accurate information, we can only publish advertisements in good faith and have not verified any claims or statements or inspected any of the properties, locations or opportunities promoted. Rightmove does not own or control and is not responsible for the properties, opportunities, website content, products or services provided or promoted by third parties and makes no warranties or representations as to the accuracy, completeness, legality, performance or suitability of any of the foregoing. We therefore accept no liability arising from any reliance made by any reader or person to whom this information is made available to. You must perform your own research and seek independent professional advice before making any decision to purchase or invest in overseas property.

You have no recent searches.
Email agent
Call agent: 03339 875472Not in the UK? Call 0034634304525
Email agent
This site: Site map Help Cookies Safety and security Terms of Use Privacy Policy
Major cities and towns in the UK: