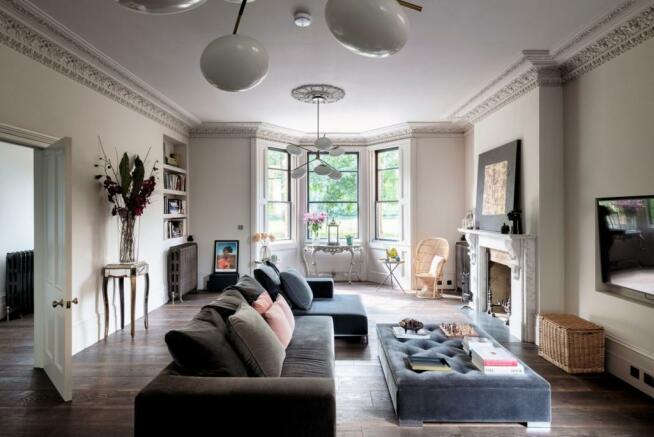 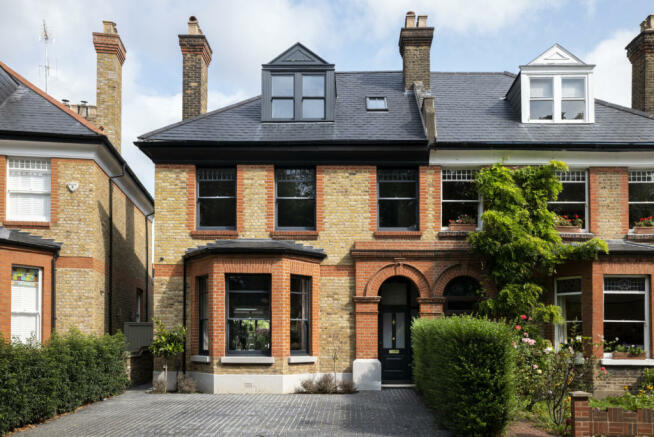 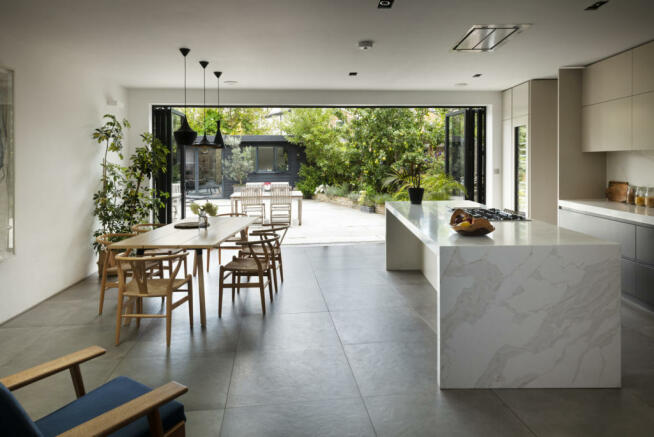 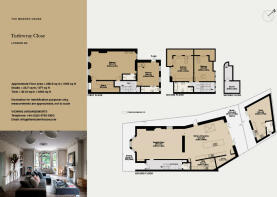 This handsome semi-detached Victorian house lies on a quiet no-through road in north Islington, with verdant views over a park and cricket pitch. It has been the subject of a comprehensive renovation throughout and has been extended to almost 3,200 sq ft internally, with four bedrooms, a wonderful open-plan ground level, and a further 270 sq ft of insulated studio space beyond the private rear garden.

The house is set back from the quiet residential street behind a large cobbled forecourt with parking space for several vehicles. It is one of six houses designed in a similar style, using a harmonious blend of London stock and red brick, and forms part of the Tollington Park conservation area.

Entry is to a traditional hallway where white walls extend to meet soaring ceilings with renewed cornicing. Oak flooring extends from here into the expansive double reception room, which runs almost 30ft in length from the wide, southwest-facing bay window to a double-sided fireplace before the kitchen and dining room. Period details such as cast-iron radiators and high skirting feature, and within the living room is another open fireplace with a marble surround.

Wide oak floorboards become large-format concrete tiles, paving the way to the extended section of the house and the kitchen therein. The custom-designed kitchen has a marble island and worktops, plus appliances by Gaggenau. Behind it lies a utility room on one side and a storeroom/larder on the other. Light pours in from several aspects and a through a roof light over the dining space. Glazed bi-fold doors open fully to the paved rear garden, blurring the division between inside and out.

The main bedroom occupies much of the first floor and is lit by two south-facing sash windows at the front, filled with the foliage of the park opposite. The room employs the same open-plan philosophy as the lower level, flowing seamlessly from bedroom to bathroom; the latter has a freestanding Corian tub by Phillipe Starck for Axa and shower enclosure in one corner. A large walk-in wardrobe runs parallel and is accessed from the front. Also on this level is a second bedroom with a mezzanine level, an en suite shower room and access to a section of roof terrace. Two further bedrooms can be found on the second floor, both with substantial storage and a bath and shower room between them.

The garden extends approximately 32ft in length and is set at an angle that allows it to benefit from sunshine for much of the day. It has been carefully designed so as to be low-maintenance, with side beds of mature fruit trees and clever planting creating privacy. At the far end is a garden studio with office space, kitchen and WC. This could also be used as a further bedroom. A side return offers lots of space for further storage and provides access to and from the front parking area which can accommodate three vehicles.

Turlewray Close is a pretty cul-de-sac located opposite the greenery of the Wray Crescent Open Space park and cricket pitch. Crouch Hill, Finsbury Park and Highgate are all within easy reach. There are several highly regarded eateries nearby including the excellent Big Jo cafe, Max’s Sandwich Shop and Dotori. The Faltering Fullback pub is moments away and further offerings are available on Stroud Green Road, known for its organic shops including Urban Native and Butler’s Deli, an independent wine shop and delicatessen. Also nearby is the open expanse of Finsbury Park and just to the north is Parkland Walk, a much-loved trail on a disused railway line that connects Finsbury Park to Highgate.

There are several excellent schools in the area; one of the main reason for its popularity with families. Primary schools include Coleridge Primary School, Weston Park Primary School, Rokesly Junior School, the Catholic St Gildas’ Junior School and St Aidan’s Voluntary Controlled Primary in nearby Stroud Green. Crouch End also has some highly regarded secondary schools including Hornsey School for Girls, Highgate Wood, and Greig City Academy to the north in Hornsey. In nearby Highgate is Channing School for Girls and Highgate School, one of the UK’s leading co-educational independent schools.

There are a number of stations for transport nearby including Crouch Hill Overground station, Archway Underground station (Northern Line) and Finsbury Park for Victoria & Piccadilly Line services and mainline trains.

Disclaimer - Property reference TMH79136. The information displayed about this property comprises a property advertisement. Rightmove.co.uk makes no warranty as to the accuracy or completeness of the advertisement or any linked or associated information, and Rightmove has no control over the content. This property advertisement does not constitute property particulars. The information is provided and maintained by The Modern House, London. Please contact the selling agent or developer directly to obtain any information which may be available under the terms of The Energy Performance of Buildings (Certificates and Inspections) (England and Wales) Regulations 2007 or the Home Report if in relation to a residential property in Scotland.