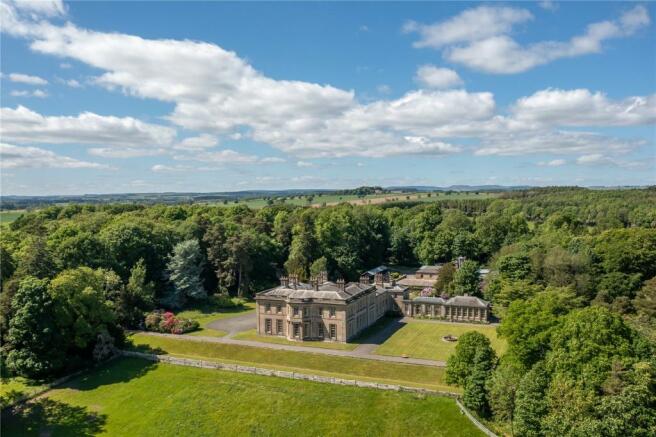 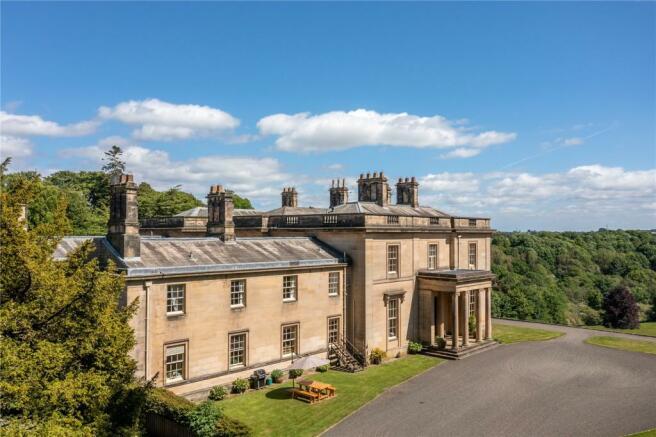 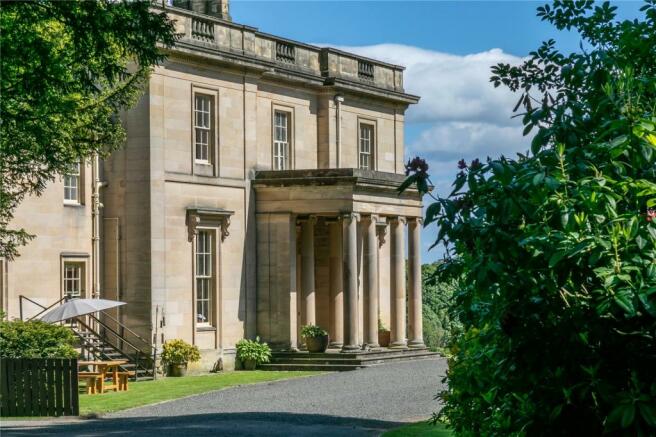 Guide Price
£3,500,000Knowing the purchase price means you can work out the total cost of buying the property.Read more about property price in our glossary page.
Added on 28/04/2022 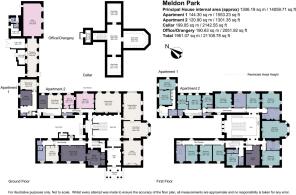 One of Northumberland’s finest country houses.

The Estate which extends in all to approximately 36 acres surrounds the centrally placed principal house which has benefitted from an ongoing maintenance and improvement programme to provide a beautifully proportioned yet manageable sized family home. Additional accommodation includes a pair of two bedroom apartments providing additional income and the Lodge. The elegant Stable Block lies to the north of the house, built on three sides of a square, and is a rare example of a traditional stable block still used for its original purpose.

Whilst ideal for those with equestrian, livestock, fishing and conservation interests there may be development opportunities within the stable block for purchasers seeking an additional income stream. A particular feature is the Biomass boiler which significantly reduces the running costs of the house.

A tree lined driveway leads from the formal entrance gates and Lodge cottage to a large gravelled parking and turning area and the imposing Ionic entrance portico. Meldon Park, which is of attractive honey coloured ashlar stone construction under a slate roof, includes the 14,000 sq ft principal house with up to
ten bedrooms arranged over two floors plus further accommodation in the north wing where there is a two bedroom apartment let as a holiday cottage and a further two bedroom property let on an AST. In addition there is the single storey orangery and billiard room. The house feels light and welcoming due to the well-proportioned Georgian rooms with large windows having a mainly south and westerly aspect from the principal rooms. The family have worked hard to create
a modern family home whilst retaining the period architectural features, including marble fireplaces, decorative plaster work, cornicing and the feature decorative false bookcase. The accommodation is shown on the floorplan and includes:

The entrance Portico with Ionic columns leads to the outer hall with stone flagged floor and then into the magnificent staircase hall, which is a particular feature of the house relying for effect on symmetry and the grandeur of scale. Along the south front of the house lie three interconnecting rooms including the Library, with marble open fireplace, ornate ceiling plasterwork and a pair of double doors leading to the Anteroom and Drawing room beyond. The Anteroom has a bay window, wood parquet floor, and marble fireplace with wood burning stove and double doors opening through to the Drawing room. The Drawing room has the “Wyatt” picture window to the east end, marble fireplace, wood parquet and ornate plaster work. The Dining room has three sets of east facing windows, large black marble fireplace and plasterwork ceiling.

There are two Studies off the east passage. The large family Kitchen together with Parlour and Utility room are in the west wing and includes a large modern dining kitchen with tiled floor, range of modern fitted floor and wall units, wooden worktop and a central island with granite worktop. There is a separate family dining area beyond which is a Snug with high ceiling
and wood burning stove, well situated off the kitchen.

On the first floor the galleried landing provides access to the bedrooms which include the large principal double Bedroom with bay window, en-suite bathroom and dressing room (or bedroom ten). Bedroom suite two includes a double bedroom and adjoining large bathroom. Bedroom three is a twin bedded room next to a house Bathroom, double Bedroom four and stairs leading down to Bedroom five which is a twin bedded room with en-suite shower room. To the west of the landing there is a large upstairs Laundry, double Bedroom six with separate WC and shower room beyond which stairs lead down to the west passage off which there are two further double Bedrooms, single Bedroom and bathroom.

An attractive feature of the property is the John Dobson designed and listed stables built on three sides of a large open yard with a two storey mid-section with symmetrical single storey wings to each side. The stable yard retains many original period features and is a rare example of a stable yard still used for its traditional purpose. The yard incorporates 11 boxes, 2 tack rooms, a feed room and 3 garages and was partly re-roofed about five years ago. There are two upstairs flats including a two bed flat and a bedsit for staff accommodation. There is a separate timber built stable block providing a further five boxes.

The formal gardens mainly lie to the south and east of the house principally comprising lawns bordered by a gravel pathway and terrace walkway sloping down to a stone Ha-Ha wall. The mature trees provide good screening and the rhododendrons are a particular feature in the spring.

Meldon Park is beautifully located within attractive, gently rolling countryside in the Wansbeck valley. The property lies approximately 6 miles west of the town of Morpeth where there is a wide range of services as well as access onto the A1 trunk road and the main east coast railway line. The city of Newcastle-upon-Tyne lies only 20 miles to the south east with Newcastle International Airport only 15 miles away. The estate is well situated in the unspoilt Wansbeck Valley within easy reach of Northumberland’s greatest landmarks, all within striking distance of Newcastle and beyond.

Nearest Postcode - NE61 3SW
Directions - Approaching from the east, either leave Morpeth town on the B6343 heading west or exit the A1 Northbound just north of the town where signposted to the A197 (Ashington) and A192 (Morpeth). Turn left at the mini roundabout then left again to Mitford village where you turn right onto the B6343 which leads to Hartburn and Scots’ Gap. The entrance gates to Meldon Park lie on the south side of the
B6343 approximately 4.4 miles west of Mitford.

Tenure - The property is offered for sale freehold with vacant possession upon completion with the exception of the Lodge and 1 East Wing which is occupied under an AST.
Method of sale - Meldon Park is offered for sale by private treaty as a whole. All prospective purchasers are encouraged to register their interest with Savills.
Fixtures and Fittings - All items normally designated as fixtures and fittings including curtains, carpets, light fittings, garden statuary (expect where listed), cast iron pots on the steps to the front of the house, troughs, the glass fronted cupboard in the tack room, saddle and bridle racks, solarium and horse walker are specifically excluded from the sale.
Rights of Way, Easements & Wayleaves - The property is sold subject to, and with the benefit of all existing wayleaves, easements and rights of way, public and private whether specifically mentioned or not. There are no public rights of way over the property.
Services - There are mains supplies of electricity and water (metered) together with a private drainage system to be upgraded if necessary by the purchaser. There is central heating to the Lodge Cottage, various multi-fuel stoves and open fires as well as a biomass boiler servicing the house and stable block. The property benefits from a monitored security
system. The water supply also serves a neighbouring residential property to which a sub meter will be installed.
Biomass Heating System - The Biomass boiler installed to the rear of the stable block is an increasingly valuable asset to the property following the recent steep rises in fuel costs. The system provides heating to the house and stables plus income from the RHI which has been in the region of £24,000 per annum. The system does however require management and the vendor would be prepared to continue to manage the system providing heat and hot water, in a way that assists all parties.
Sporting and Fishing Rights - The sporting and fishing rights are included in the sale.
Subsidies & Grants - The land is registered with the Rural Land Registry however no Entitlements are included in the sale.
The Park has been included within a larger HLS agreement which runs until 30th November 2023.
Planning - Meldon Park together with the Conservatory and stable block are Grade II* listed in addition to which the entrance lodge, various walls, terrace and fountain are Grade II listed.
Covenant - The property will be sold subject to a covenant prohibiting the building of new structures to the west of the entrance and front drive.

Disclaimer - Property reference YOR210015. The information displayed about this property comprises a property advertisement. Rightmove.co.uk makes no warranty as to the accuracy or completeness of the advertisement or any linked or associated information, and Rightmove has no control over the content. This property advertisement does not constitute property particulars. The information is provided and maintained by Savills, York. Please contact the selling agent or developer directly to obtain any information which may be available under the terms of The Energy Performance of Buildings (Certificates and Inspections) (England and Wales) Regulations 2007 or the Home Report if in relation to a residential property in Scotland.