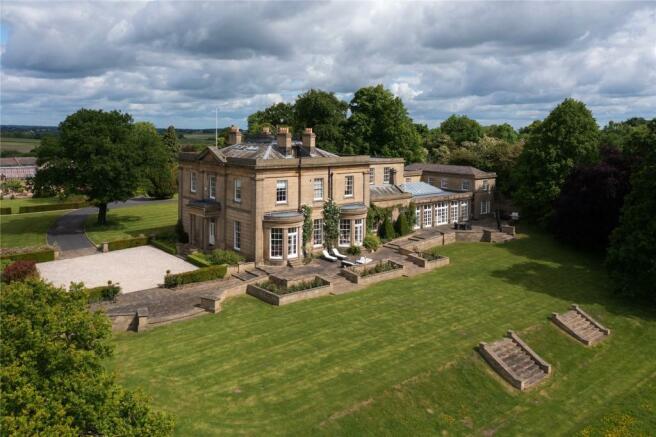 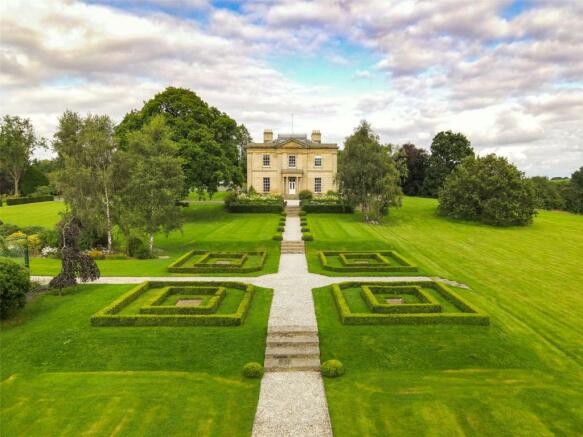 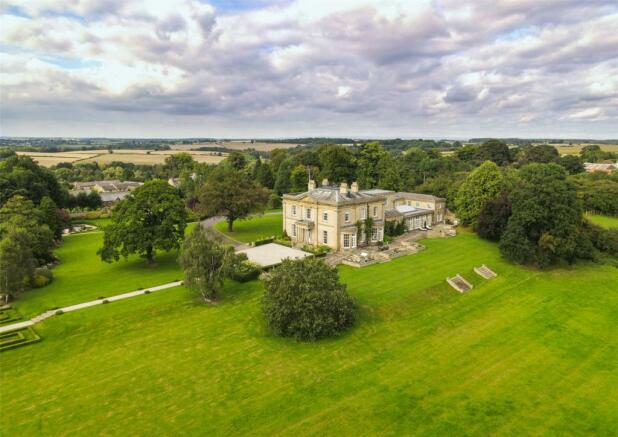 Guide Price
£6,500,000Knowing the purchase price means you can work out the total cost of buying the property.Read more about property price in our glossary page.
Added on 08/06/2022 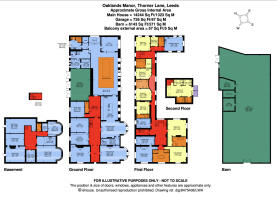 One of Yorkshire's finest Georgian manor houses, standing in beautiful landscaped grounds and woodland extending to about 60 acres, with enviable views of the surrounding countryside.

A handsome Grade II listed Georgian manor house occupying a discrete but commanding elevated position between the villages of Scarcroft and Thorner, set in about 60 acres of grounds, comprising of formal terracing, lawns, a walled garden, parkland and managed woodland surrounding a wildlife lake. The house provides close to 15,000 square feet of beautifully presented and classically proportioned accommodation, including a host of formal and informal reception rooms, a total of eight bedrooms with bathrooms; six in the main accommodation and a further two in the guest suite. The basement area is dedicated to entertainment and boasts two fantastic wine cellars no doubt commissioned by the original owner, a renowned Wine and Spirits Merchant. The current owners have retained one cellar for housing their wine collection and converted the second cellar to a modern bar. The remaining rooms at this level comprise of a music room, billiard room and a cinema. A substantial leisure wing resides to the rear of the property incorporating an indoor swimming pool with jacuzzi and well equipped gym. The garage currently houses three cars. In addition to the Manor there is a large agricultural barn accessed via a rear driveway, with potential for a variety of uses.

Built in 1837 and originally know as Scarcroft Hill House, Oaklands Manor is one the finest examples of Georgian architecture in the North of England. Amongst its owners have been two Lord Mayors, several notable industrialists and a well known Leeds surgeon. In the late 60s it was converted for use as offices and in 1984 it was purchased by a computer business and gradually extended. Thanks in part to the Grade II listing the original features and general internal layout of the building remained relatively untouched, preserving some magnificent period features, including the impressive Corinthian columned entrance hall, and some very ornate cornicing and ceiling medallions throughout.

In 2005 planning was obtained for conversion to nine apartments before being bought by the present owners who began a comprehensive program of renovation and refurbishment to return It to a single family home. The property has been sympathetically restored and extended. The improvements were carried out using traditional methods and materials to seamlessly blend the old with the new. In addition the infrastructure had a complete overhaul, including Rako lighting, a unvented central heating system. Furniture designer Neal Jones was commissioned to build the fitted library and magnificent kitchen. The libary and adjoining study, accessed by a hidden door, are fitted out in Makassar ebony and satinwood with accent nickel trim. The hand built kitchen has floor to ceiling storage along one wall and an Impressive island in book-matched walnut,

This is a grand house, with perfectly proportioned rooms, bathed in copious amounts of natural light and enjoying contrasting views of the surrounding gardens and parkland. There is a room for all occasions and seasons, each beautifully decorated but ensuring the period features take centre stage. There are six generous bedrooms with en suite bathrooms, including the principal suite with its own morning room and dressing room. The two bedroom guest suite can easily be incorporated into the main house making eight bedrooms in total.

The house is approached via a gated tarmac driveway which dissects the lawned gardens, splitting to provide access to the formal entrance with its large gravelled parking area overlooking the grounds, and a service driveway to the day to day parking area and garaging. The gardens extend to a hedged and walled boundary to the north and east, dotted with specimen trees, the western flank being retained by an attractive brick wall which provides the perfect backdrop to an ornamental terraced garden and Japanese inspired pond area, complete with teahouse providing a superb vantage point.

The bulk of the grounds lay to the south and west, the manicured lawns formed into gentle terraces, dissected by gravel pathways passing a parterre and leading down to an all weather tennis court and productive vegetable garden. The lower garden, which extends to about 15 acres, is predominantly grassland providing ample grazing for horses or livestock, supported by a steel frame barn measuring approximately 116'x59', accessed via a separate driveway. The remainder of the land, totalling about 40 acres, comprises of woodland, known locally as Kidhurst Wood and Hell Wood, originally planted for timber production and filled with a mixture of hardwoods, broadleaf species and larch. Scarcroft Beck runs through the wood and has been dammed at the southern edge to create an attractive ornamental lake.

The property is situated on the outer fringes of Scarcroft village in a private corner of a small hamlet surrounded by open countryside, about six miles from Leeds City Centre. Despite the peaceful location the property is ideally placed for access to Yorkshire's commercial centres, including Harrogate and York.

The area is well served with retail and sporting facilities together with most denominations of schools, including the renowned Grammar School at Leeds about two miles away, as well as Gateways at Harewood and Ashville College in Harrogate (about 13 miles). The village is well placed for access to the A1M opening up the national motorway network and Leeds Bradford Airport is about nine miles away providing regular domestic and international flights.

Please note all distances and travel times are approximate.

A member of the family works for Savills Leeds.

Energy Performance CertificatesA document confirming the energy efficiency rating of the property.Read more about epc in our glossary page.

Disclaimer - Property reference YOS220087. The information displayed about this property comprises a property advertisement. Rightmove.co.uk makes no warranty as to the accuracy or completeness of the advertisement or any linked or associated information, and Rightmove has no control over the content. This property advertisement does not constitute property particulars. The information is provided and maintained by Savills, York. Please contact the selling agent or developer directly to obtain any information which may be available under the terms of The Energy Performance of Buildings (Certificates and Inspections) (England and Wales) Regulations 2007 or the Home Report if in relation to a residential property in Scotland.