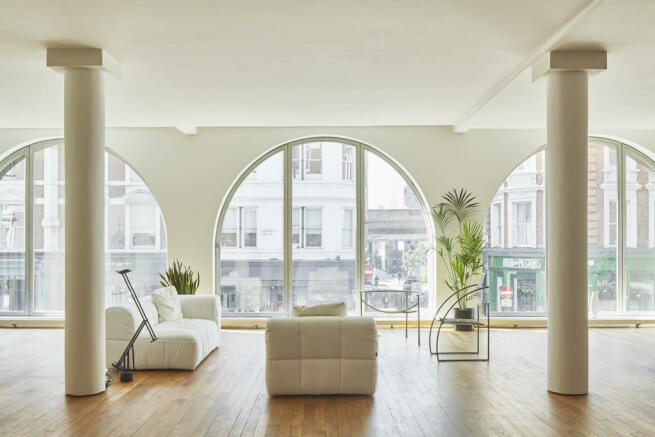 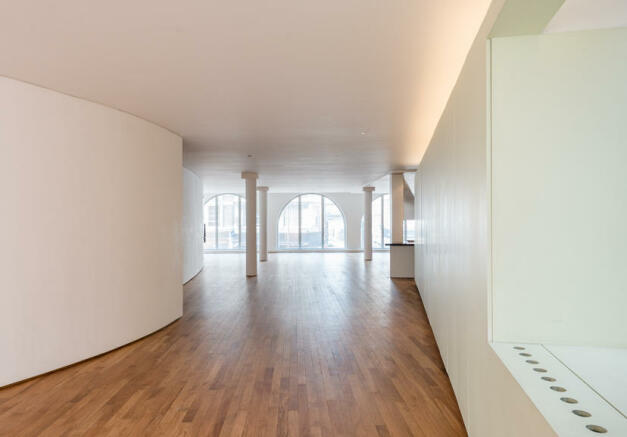 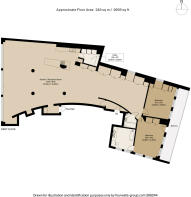 Occupying the entire first floor of a former shoe factory on Shoreditch High Street, this sweeping two-bedroom live/work apartment, with large rear balcony, extends to almost 2,700 sq ft and is flooded with light from swathes of glazing at both aspects.

The main living space is arranged in an expansive, curving open plan, interrupted only by structural pillars and lit from the western facade by three enormous arched windows that look out over Shoreditch High Street and along the length of Rivington Street opposite.

The kitchen is situated in the north-eastern corner and has granite worktops, macassar ebony cabinets and appliances by Gorenje. A separate utility room is set to one side. Built-in storage lines the northern wall, concealing recessed lighting and linking the living space and kitchen to the two bedrooms at the rear. A large balcony is accessed via the master bedroom which has an en-suite bathroom with free-standing bath and double sink. Both rooms are lit by high-reaching original Crittal windows. Oak flooring extends throughout.

Further demised storage is afforded by a room on the external landing which occupies the space vacated by a former lift shaft.

The property is situated on the corner of Shoreditch High Street and Calvert Avenue. The immediate area contains some of London’s best bars, restaurants and high-end retailers, including the Soho House group’s Shoreditch House, Rochelle Canteen, Blue Mountain School, and remains a magnet for creative businesses. The apartment is seconds from Boundary Street, a quiet cobbled lane that has been invigorated as a gastronomic destination, with Bombay-style street food restaurant Dishoom Shoreditch and the excellent Boundary Project, a former Victorian warehouse remodelled by Terence Conran, comprising Albion café, a deli, TraTra restaurant and a rooftop bar and grill. Brick Lane, Spitalfields, Broadway and Columbia Road markets are all a short walk away.

Shoreditch High Street is the nearest station, with services on the London Overground running to Highbury & Islington and Dalston Junction in one direction, and Clapham Junction in the other. The Underground can be picked up at Liverpool Street (Central, Circle, Hammersmith & City, Metropolitan Lines) or Old Street (Northern Line).

Disclaimer - Property reference TMH78294. The information displayed about this property comprises a property advertisement. Rightmove.co.uk makes no warranty as to the accuracy or completeness of the advertisement or any linked or associated information, and Rightmove has no control over the content. This property advertisement does not constitute property particulars. The information is provided and maintained by The Modern House, London. Please contact the selling agent or developer directly to obtain any information which may be available under the terms of The Energy Performance of Buildings (Certificates and Inspections) (England and Wales) Regulations 2007 or the Home Report if in relation to a residential property in Scotland.