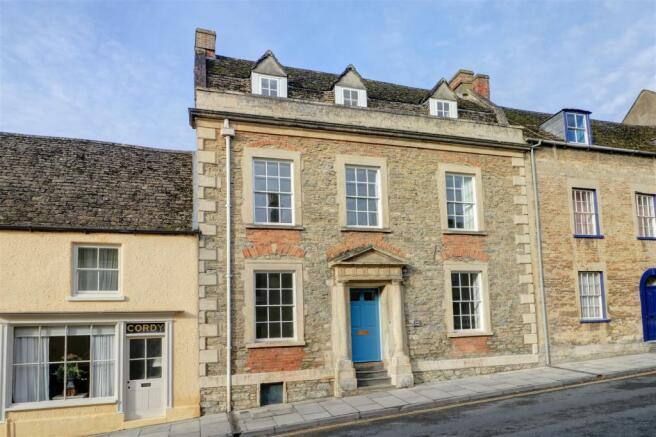 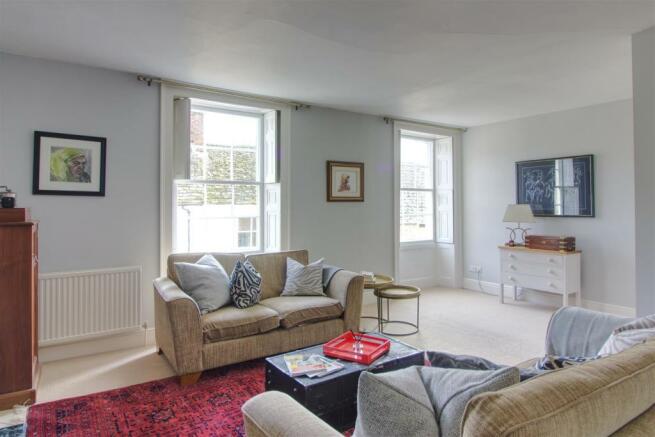 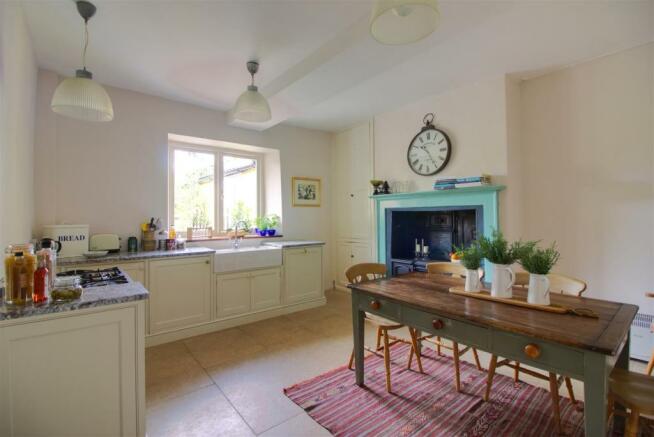 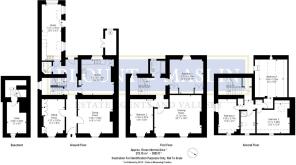 The Property - Steeped in history, this impressive Georgian home is Grade II Listed and dates from 1770. It has a classically symmetrical double fronted façade with a mansard roof, pediment porch and pilasters. It is conveniently situated in the centre of what is reputed to be England's oldest borough and has accommodation arranged over three floors, plus cellarage. Due to the town's early origins, it is one of few such sizeable town houses nestled within the pretty streets of predominately Weavers cottages that make up the unspoilt centre of this popular town, on the southern tip of the Cotswolds. There are an abundance of period features including several fireplaces, a lovely old range, sash windows with panelled shutters, a wonderful flagged hall and a charming turned staircase that winds up through the house, with windows on the half landings.

The Accommodation - The heavy panelled front door leads into a lovely flagged hall with a round archway, rear door to the garden and a cloakroom off. A door and stone steps leads down to the cellar with a pavement window and services. On the right of the hall, the dining room has a cast iron fireplace with arched recesses either side and a shuttered sash window. On the left, the sitting room has a fireplace with marble surround and extensive built-in cupboards and shelving either side. The sash window again has shutters. The kitchen/breakfast room has a large window overlooking the rear garden and an impressive Victorian range, set in a wide fireplace. The base cupboards have granite work surfaces and include a Villeroy and Bosch ceramic sink. The dishwasher is integrated and there is a Smeg dual fuel cooker. The triple aspect studio at the rear is a wonderful space with vaulted ceiling and access to the garden. It has a good range of units with space for two under-counter appliances, and could prove useful for a variety of uses, having previously been the kitchen. On the first floor, the elegant L shaped drawing room has a fireplace with marble surround and two shuttered windows. Next door is a bedroom, currently used as a study, again with shutters. At the rear, the main bedroom has deep cupboards either side of the bed position which incorporate the hot water cylinder. A large shuttered window overlooks the rear garden with views of the Wiltshire countryside beyond, while adjacent is a bathroom with tiled walls and marble detailing. On the second floor are three further bedrooms, all with windows on more than one elevation, and one having a mezzanine level. In addition there is a family shower room.

Outside - At the rear is a private terrace accessed from the hall and studio, with an adjacent useful store with power and light, and housing the gas boiler. Steps lead up to the good sized west facing garden, enclosed by a mellow red brick wall and good fencing. Adjoining the studio is covered storage and a second sitting out area. The garden is divided into two compartments by a pergola, beyond which are two brick compost bins and a garden shed. The garden contains specimin and fruit trees, together with well stocked borders.

Location - Malmesbury lies close to the border of Wiltshire and Gloucestershire, 14 miles south of Cirencester and 10 miles north of Chippenham, with Swindon 16 miles to the east and Bath 24 miles to the west. It has a good selection of shops including a Waitrose supermarket, a regular farmers' market, a library, museum, leisure centre with pool, two primary schools and an Ofsted rated Outstanding secondary school. It is also home to the UK headquarters of Dyson, who employ over 3000 people. J17 of the M4, 5 miles south, provides access to the area's major employment centres and there are trains to Paddington in just over an hour from Chippenham, Kemble and Swindon.

Directions To Sn16 9Ag - The property is located a short distance from our office, on the opposite side of the High Street. From M4 junction 17, head north towards Malmesbury and on reaching the priory roundabout, take the first exit and proceed up the High Street. Shortly after the left fork to Kingswall, the house will be found on your left hand side, denoted by our 'For Sale' board. 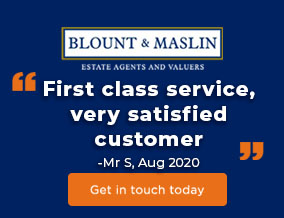 We are the only agent in Malmesbury dedicated to selling homes. We pride ourselves on realistic pricing and have an exceptionally high percentage of sales that reach completion.

We are fiercely independent and pride ourselves on giving impartial and honest advice. We provide a personal and attentive service from appraisal to completion.

We operate on a 'no-sale no-fee' basis and our sole agency contract can be terminated immediately, if you are unsatisfie

Disclaimer - Property reference 30092969. The information displayed about this property comprises a property advertisement. Rightmove.co.uk makes no warranty as to the accuracy or completeness of the advertisement or any linked or associated information, and Rightmove has no control over the content. This property advertisement does not constitute property particulars. The information is provided and maintained by Blount & Maslin, Malmesbury. Please contact the selling agent or developer directly to obtain any information which may be available under the terms of The Energy Performance of Buildings (Certificates and Inspections) (England and Wales) Regulations 2007 or the Home Report if in relation to a residential property in Scotland.