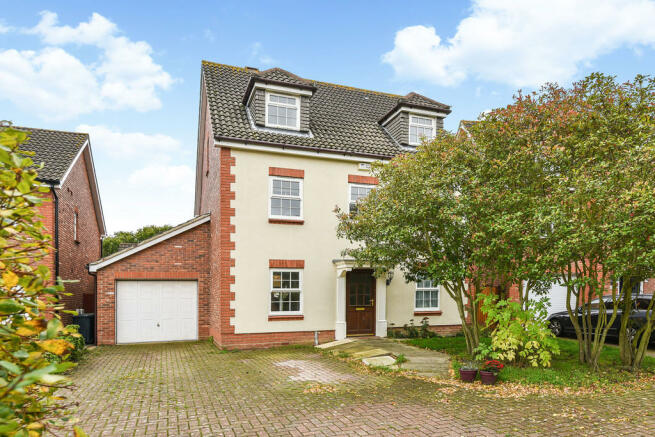 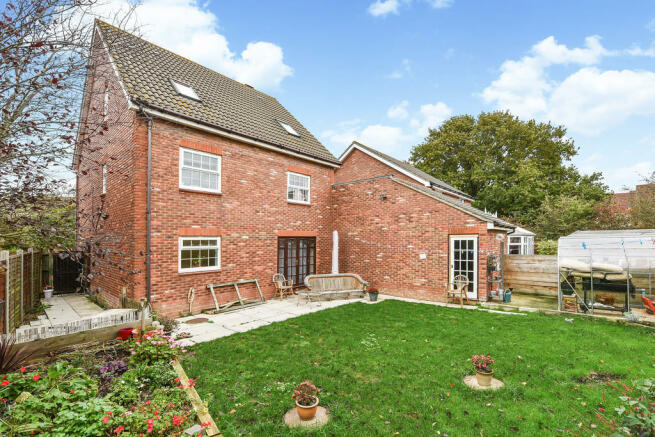 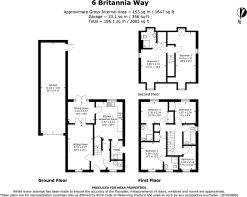 FULL DISCRIPTION Chris Smeed @ Nexa Properties is delighted to offer you this superb family home offering spacious accommodation. This particular property was originally the show home built by Bellway homes approximately 20 years agoand offers superior accommodation over three floors. Off the hall is the ground floor cloakroom and w.c. There is a good size kitchen/breakfast room with a large table to comfortably sit 8 and a range cooker which we believe is to remain. There is also a useful utility room with door to side garden.
The living room and dining room are connected by French doors providing a complete walk around of the ground floor perfect for entertaining.
On the first floor two double bedrooms both have en-suite shower rooms and built-in wardrobes, while the other two single bedrooms one of which has built-in wardrobes, share a family bathroom. On the upper floor you will find the master bedroom with en-suite shower room and built-in wardrobes. There is a glimpse of Spinnaker Tower from the en-suite window. The final bedroom which again is a double with recess for wardrobes has access to the loft. This has been lagged and boarding and has light. It is a fantastic size and provides lots of potential.
Outside there is parking on block paving for three cars. The garage is double length with over head storage and door to garden. There is a path to front door and path to other side with a gate giving access to the rear garden.
The south facing garden is private and has a patio area, green house, raised borders for vegetables and herbs and finally a pond has been newly created.

The famous and now popular Priddy's Hard is home to impressive modern developments. Being close to the water these fortunate residents have a short walk to the waters edge to benefit stunning views towards Portsmouth and Gunwharf Quays with the Spinnaker Tower standing proudly guarding the city.
In 1750, by an Act of King George III, the Board of Ordnance purchased 40 acres of land and a boatyard, in Gosport, from Jane Priddy and a Fareham Vicar called the Reverend Thomas Missing. This was the beginning of Priddy's Hard Armament Depot and by 1757 the area was completely sealed off to the Public.
In Nelson's days, HMS Victory and the other vessels were also supplied from here; the Grand Magazine held no less than 4,500 barrels of gunpowder, each weighing around 45Kg. It was build using over 3 million bricks with walls eight feet thick. With easy access to Portsmouth Dockyard, a short distance across the harbour, Priddy's Hard was an ideal location for the magazine.
Weapons were made at Priddy's Hard until fairly recently but, with the advent of modern technology, the old buildings were not really up to the job and it was closed down. Thankfully some of its former glory is now preserved and it's been turned into the Museum of naval firepower called simply "Explosion".

Agent's Note: The property does require some modernisation but this is clearly reflected in the price.

Moving is a busy and exciting time and we're here to make sure the experience goes as smoothly as possible by giving you all the help you need under one roof.

The company has always used computer and internet technology, but the company's biggest strength is the genuinely warm, friendly and professional approach that we offer all of our clients.

Our record of success has been built upon a single-minded desire to provide our clients, with a top class personal service delivered by h

Disclaimer - Property reference 103284002182. The information displayed about this property comprises a property advertisement. Rightmove.co.uk makes no warranty as to the accuracy or completeness of the advertisement or any linked or associated information, and Rightmove has no control over the content. This property advertisement does not constitute property particulars. The information is provided and maintained by NEXA Properties, Southsea. Please contact the selling agent or developer directly to obtain any information which may be available under the terms of The Energy Performance of Buildings (Certificates and Inspections) (England and Wales) Regulations 2007 or the Home Report if in relation to a residential property in Scotland.