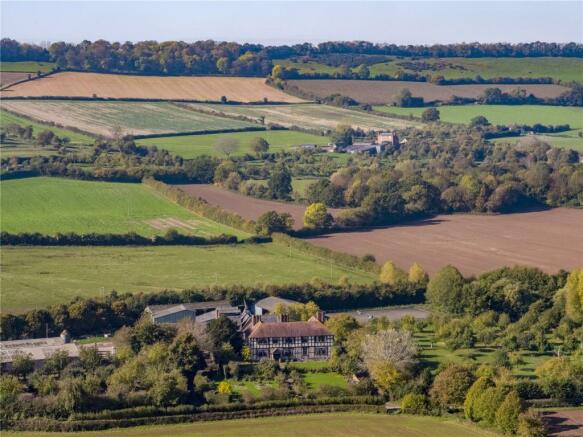 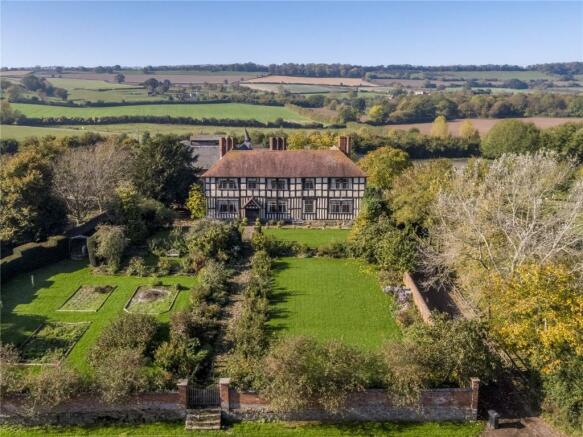 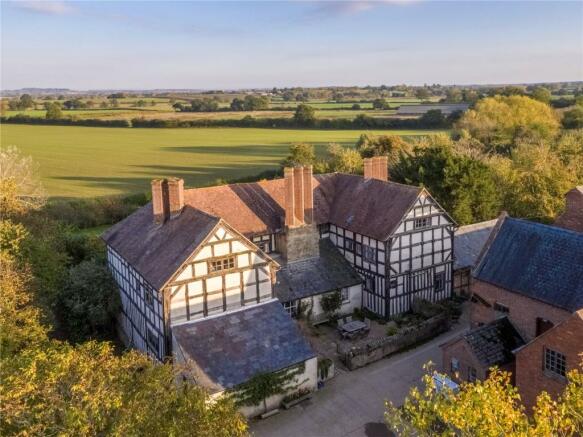 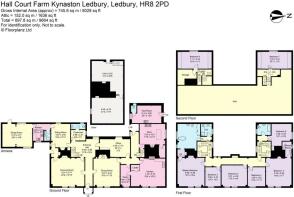 Hall Court is offered for sale as a whole or in 2 lots by private treaty:

Hall Court
Hall Court enjoys a quiet rural position in South Herefordshire with views to the Malvern Hills. The rural yet accessible location is within easy reach of the M50 and offers a rare opportunity to purchase this substantial historic house in a sought after area.

The house was built by John Coke in the early 1600’s replacing another dwelling, the moat for which is buried in the field opposite the house.

Hall Court, which is Grade II* Listed, extends to over 8000 square feet and offers eight bedrooms with additional attic and cellar. The House is of attractive half-timbered construction under a tiled roof and inside the house is divided between larger formal rooms and more family living rooms. Of note is the large kitchen overlooking the garden complimented by a pantry and dairy. The house boasts a wealth of historic architectural and decorative features including wainscoted rooms, exposed beams and large fireplaces giving the the house considerable character.

Upstairs five of the bedrooms are located in the front façade and benefit from views over the garden to the Malvern Hills. The southern extension of the house serves as a one bedroom annexe.

Outside the stunning walled garden has been extensively modelled by the Vendor and is comprised of yew hedges, mature herbaceous borders, lawns and vegetable beds divided by a rose walk.

Buildings
Located to the rear of the house are the extensive range of 19th century Grade II Listed brick hop kilns and associated buildings which extend to just over 5900 square feet on the ground floor. Some of these buildings are three stories in height and offer a wealth of opportunity for a variety of uses.

The equestrian unit comprises an American barn with 18 modular stables together with tack room and wash areas. In addition there is a substantial outdoor school with a Martin Collins surface.

There is a further range of farm buildings located within the farm yard.

The land
Surrounding the house the land comprises a mixture of
permanent pasture and orchards planted with traditional apple
varieties. There is a large pond bordered by mature willow trees.

Hall Court is located just outside the small hamlet of Kynaston west of the attractive town of Ledbury. Ledbury benefits from a good range of amenities and further afield Cheltenham and Worcester provide a much greater range of leisure, retail and cultural facilities.

Primary schools at Ashperton and Much Marcle are rated outstanding by Ofsted, secondary schooling is available at Ledbury and at Hereford, the Sixth Form College was voted winner of the 2016 TES Sixth Form College of the Year. In addition there are a number of independent schools in easy reach including Malvern, Hereford Cathedral School, Cheltenham Ladies and Cheltenham College and the highly regarded Elms Prep School.

By Train: Ledbury to London Paddington from 2 hours 57 minutes

From Ledbury proceed west on the A449 until reaching the Walwyn Arms at Much Marcle. Turn right here and continue on this road until finding a turning on the right signposted to Rushall and Kynaston. continue on this road, following signs to Kynaston. On reaching Rushall follow the road to the right signposted Kynaston, Putley and Poolend. Continue through the village and Hall Court will be found on the left hand side shortly before the village of Kynaston.

Disclaimer - Property reference OXR180024. The information displayed about this property comprises a property advertisement. Rightmove.co.uk makes no warranty as to the accuracy or completeness of the advertisement or any linked or associated information, and Rightmove has no control over the content. This property advertisement does not constitute property particulars. The information is provided and maintained by Savills Rural Sales, Botley. Please contact the selling agent or developer directly to obtain any information which may be available under the terms of The Energy Performance of Buildings (Certificates and Inspections) (England and Wales) Regulations 2007 or the Home Report if in relation to a residential property in Scotland.