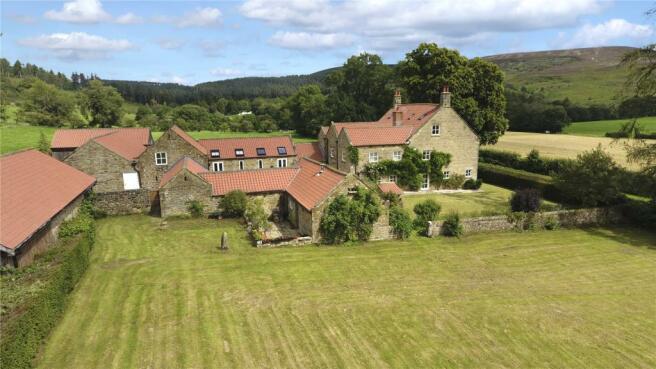 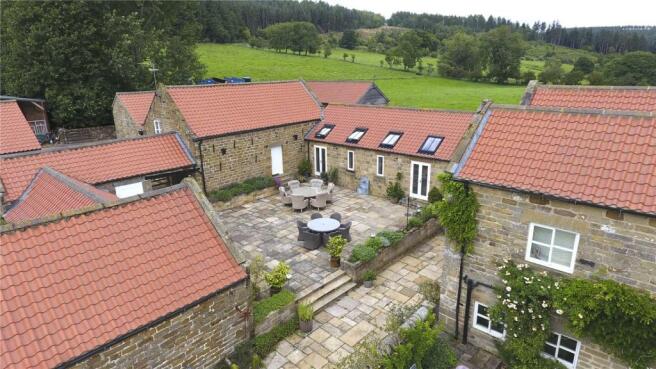 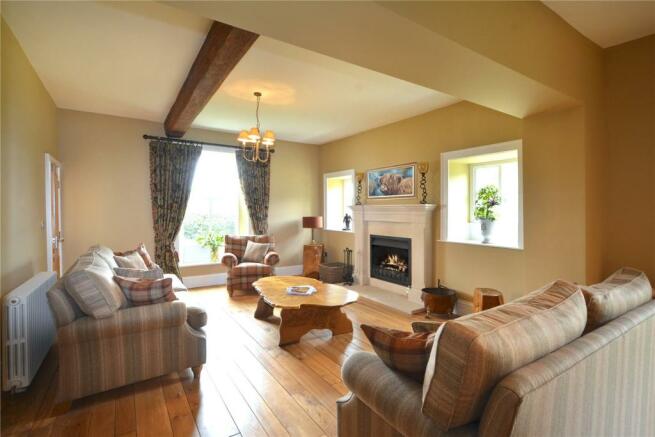 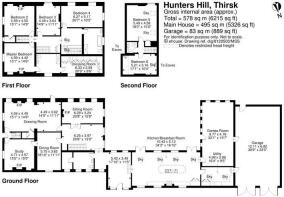 Originally a relatively modest farmhouse built in the vernacular style, Hunters Hill Farm has been significantly extended and improved in recent years and now forms an extremely extensive, impressive and well appointed property in a quite idyllic location a short distance away from the village of Nether Silton at the foot of the Cleveland and Hambleton Hills on the western edge of the North York Moors National Park.

There are many natural attractions in the area within easy reach of the property to include the Hambleton Hills and Cleveland Hills, the Howardian Hills (a designated Area of Outstanding Natural Beauty) and the North York Moors National Park which offer many miles of hill walking and outstanding scenery to enjoy. From the property there is easy access to an extensive network of bridleways and a number of well regarded hunts lie within easy boxing distance.

Hunters Hill Farm lies in a convenient location just a short distance east of the main A19 York – Teesside trunk road which may be joined north of Thirsk from where there is quick and easy access to the A1 Great North Road, the wider motorway network and the commercial centres of Teesside and the West Riding. Teesside International Airport lies about 19 miles to the north. There are main line railway stations at York, Northallerton and Thirsk providing services to London (Kings’ Cross), Newcastle and Edinburgh as well as a trans-pennine route. There is a full range of facilities in the popular nearby market towns of Northallerton and Thirsk.

Hunters Hill is a most charming, extended period property constructed of stone elevations under pantile roofs with dressed stone quoins, window cills and lintels to the original part of the house. The façade belies the extraordinary conversion that has taken place and the property now offers extensive, elegant and quite superbly appointed modern living accommodation of quite some quality and style. The present owners have significantly extended the living accommodation by converting an adjoining traditional range of outbuildings into a new Entrance Hall, superb Living Kitchen, Games Room and Garage and to which access is gained from the gravelled entrance driveway.

The beamed Entrance Hall is spacious with a Slate floor and off which is a large Cloakroom with matching slate floor and Heritage suite leading to a convenient Boot Room. Adjacent is an elegant Staircase Hall with Slate floor and recessed ceiling lights and which provides access to the accommodation in the original property. To the southern elevation is a comfortable Sitting Room with wood burning stove and also an elegant beamed Drawing Room with Oak doors and stone fireplace. The original Entrance Lobby lies to the eastern elevation from where a secondary flight of stairs rises to the first floor and adjacent to which is a spacious Study with large ceiling beam, stone fireplace, window seat and a display alcove with inlaid timber above. Oak doors open to the Dining Room with an exposed original timber window lintel. From the Entrance Hall a flight of steps leads to a quite superb fitted Living Kitchen which is now perhaps, the signature feature of the house. The extensive accommodation which has the benefit of an integrated sound system boasts exposed structural timbers, Slate floor with underfloor heating, extensive polished granite worksurfaces with cupboards and drawers beneath and an electric 4-oven Aga flanked by Oak cupboards. Completing the picture is a large Island Unit with matching polished granite surface, double sink with mixer tap and integrated dishwasher and refrigerator whilst adjacent is a good sized Oak larder cupboard. Of particular note is the fact that to the southern elevation are four roof lights making for a most light and spacious living room of great character and style and from where double doors open to the sheltered Inner Courtyard. Adjoining is a good sized Utility Room with Slate floor, polished granite worksurfaces, Oak store cupboard and Siemens conventional and steam ovens with warming drawers beneath. Beyond is a most wonderful Games Room which has been created from the entirety of a substantial traditional Range being open to the ridge with exposed structural timbers and Slate floor with direct access to a substantial Garage with wooden double doors.

From the Staircase Hall a flight of turning stairs leads up to a good sized Galleried Landing with direct access to a wonderful House Bathroom with recessed ceiling lights, tiled floor and underfloor central heating, Laufen suite comprising large bath, power shower, two heated towel rails, WC and pedestal washbasin. The principal bedroom enjoys wonderful views to the east towards towards Kepwick Moor and has the benefit of recessed ceiling lights and a stone fireplace. A door opens to an ensuite Bathroom with Laufen suite of shower, pedestal washbasin, low level flush WC and heated towel rail whilst adjacent is a Dressing Room with an extensive range of built in wardrobes. Completing the picture are three further bedrooms whilst to the second floor is a Shower Room flanked by two further bedrooms with conservation roof lights.

Externally the property is a true delight with the gardens and grounds approached via a central stone flagged inner Courtyard which forms a most delightful sheltered, south facing summer seating and al fresco dining area which is also floodlit and connected to the house sound system. It is enclosed respectively by the original house, the Kitchen extension, the Games Room and three further traditional ranges comprising a number of miscellaneous stores and a workshop. There is a wonderful south easterly aspect towards the North York Moors and a short flagged stone path leads to the gardens, to one side of which is an open fronted Garden Room created from the southern end of a traditional stone range which opens also to a secondary west facing stone flagged Sun terrace with wood burning stove.

Immediately to the front of the property is a small lawn bounded by a stone wall and here the house is adorned on two elevations by a prolific Wisteria, Roses and a Ceanothus whilst the garden is protected from the road by a Yew, Cotoneaster and Holly hedge with the entrance being guarded by a magnificent specimen Beech. Beyond lies the principal garden which is principally laid down to a lawn bounded on its eastern side by a Yew and Beech hedge interspersed with various specimen trees to include Ash, Larch and a row of Lime. The western boundary is a Yew and Blackthorn hedge whilst the southern boundary is defined by a small stream which acts as an effective ha-ha framed by Holly hedging and from where there is a most wonderful open vista over the adjoining farmland.

The farmyard lies on the western side of the homestead from which it is separated by a substantial timber and pantile machinery and general store. The farm buildings comprise an 8-bay open fronted steel framed stock shed with space boarded elevations and part with front feed rail. This is supplemented by a 2-bay monopitch timber pole barn and a 2-bay steel framed youngstock building with adjacent tubular steel cattle handling race.

Approached direct from the gravelled driveway is a timber and pantile Garage Block with two central bays flanked by lock-up stores.

The farmland is all laid down to pasture with a small area of amenity woodland thereby making the property ideal for anyone wishing to carry on a grazing livestock enterprise but would be equally attractive to those with an equestrian interest.

Humberts specialises in providing trusted advice to individuals and organisations with an interest in residential, rural, agricultural, leisure or commercial property. If you’re thinking of buying or selling property or land, we’re here to help.

Disclaimer - Property reference YOR130010. The information displayed about this property comprises a property advertisement. Rightmove.co.uk makes no warranty as to the accuracy or completeness of the advertisement or any linked or associated information, and Rightmove has no control over the content. This property advertisement does not constitute property particulars. The information is provided and maintained by Humberts, York. Please contact the selling agent or developer directly to obtain any information which may be available under the terms of The Energy Performance of Buildings (Certificates and Inspections) (England and Wales) Regulations 2007 or the Home Report if in relation to a residential property in Scotland.