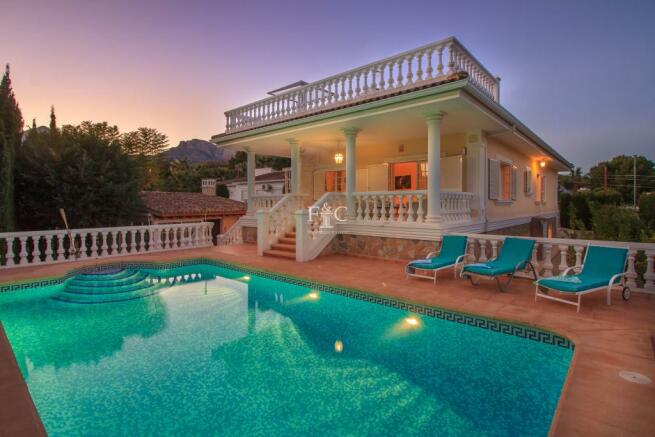 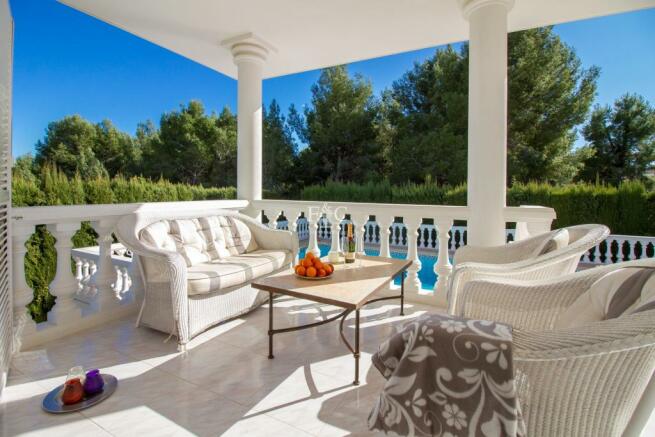 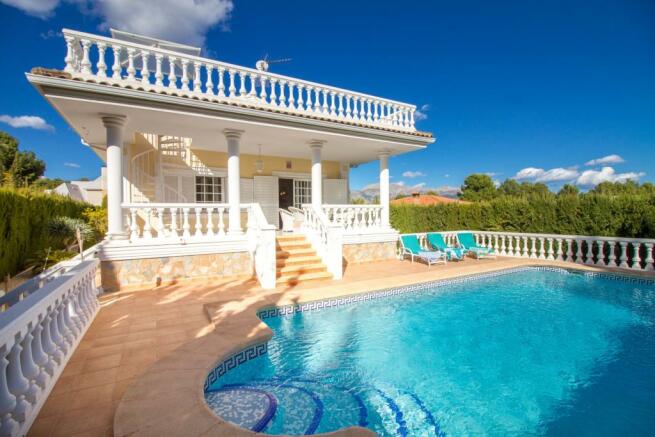 Built area: 365m2. Plot size: 990m2. This stunning and immaculately presented modern Levantine villa is for sale at an extremely exceptional price. Benefitting from 6 bedrooms in the main house plus a separate casita than can be used as a guest house, for independent family members or for those looking for a home office. Designed to maximise and ensure private the property also boasts a roof terrace to take advantage of the views.

Located in a residential area well suited for families near the Norwegian school and only a short drive to the beach. With beautiful surroundings the area has attracted many international visitors to settle here including British, Dutch, Belgian and it has the highest proportion of Norwegian speakers of any settlement anywhere in the world outside Norway making it an area known for people with high demands. Close to stunning beaches with crystal blue waters, traditional and quaint villages, green mountain and picturesque scenery, extensive sports facilities including Golf, it also has a one of the few cricket grounds that exist in Spain and it is the only one where international tournaments are held.

Built over two levels the ground floor features an entrance area with plenty of closet space, an ample and bright living-room, a large modern bathroom, laundry room and 2 size double bedrooms. There is direct access to the double garage from this floor. Moreover, on this floor, there is another large bedroom which is currently used as an office.On the upper level we find a master suite with private bathroom, 2 double size bedrooms which share a bathroom, a new modern kitchen and the main living area with a 50 sqm living/dining room with open fire-place, which opens up to the large covered terrace with forest and mountain views and the access to the pool area.The two units can be used as one large family home, or separated from one another into a 4 bedroom and a 2 bedroom apartment.Because of its location, it is the perfect place for those who seek to connect with nature, and a paradise for mountain lovers who could practice mountaineering, hiking or simply breathe the pure mountain air.This villa is distinguished by its beautiful garden, its gorgeous south facing terrace and its swimming pool area surrounded by Mediterranean pine forest as well as its 'casita' - the outdoor kitchen with large sliding doors, which could also be turned into a separate guest house.

LOCATION Alfaz del Pi is a town located in the province of Alicante, on the Costa Blanca, Spain. Nestling in the foothills of the Sierra Helada, in the district of the Marina Baixa it is only a 5 minute drive from the coast to a modern seaside resort with tree lined avenues, excellent hotels, world class international restaurants and fashionable seafront bars. It is situated 47 kilometres north of Alicante and boasts a wonderful beachfront, with spectacular views to the huge rock Peñon de Ifach at Calpe.

It is a town famous on the Costa Blanca because it has more foreign than Spanish residents including British, Scandinavians, Dutch and Belgians. As a result, there is a great mix of over 100 different nationalities living in Alfaz and it has the highest proportion of Norwegian speakers of any settlement anywhere in the world outside Norway. The local culture is dynamic and diverse and it all started in the 1960s when L’Alfàs del Pi started to exert a magnetic effect on tourists. As a result, attracting visitors from far-flung places that decided to make this town their permanent homes.

The town dates back to the Moorish occupation. The name ‘Alfaz’ derives from the Arabic word for ‘sown land’, as the region was used to grow fruits and almonds. Later on the town became a fortified settlement, which protected the local coastline against the Barbary pirates.The beach at Alfaz del Pi is particularly appealing, with golden sands, a pretty promenade and crystal clear, calm waters. The views from the beachfront are beautiful with a clear view to the Peñon de Ifach at nearby Calpe and it is well located to explore the rest of the Costa Blanca and Alicante Province including the Fuentes de Algar waterfalls and has easy access to Alicante City, Denia, Calpe and other cultural and attractive seaside towns and villages along the coast and inland.

It has a one of the few cricket grounds that exist in Spain and it is the only one where international tournaments are held. If you want to partake in a round of golf then you are in luck, as Alfaz del Pi has a driving range and is close to several good golf courses, including Ifach Golf and Real Faula courses.When it comes to dining out the town offers a great choice of dining options; with a good selection of traditional, seafood, international and high-end restaurants.Alfaz del Pi enjoys a fantastic mild all year round climate, with temperatures reaching 40ºC in the summer; the winters are warm and temperate and together with its` neighbours Altea and Albir it is an area for people with high demands, close to beautiful beaches with crystal blue waters, traditional and quaint villages, green mountain and picturesque scenery.

There are few places in the world where the northern part of a small coastline contrasts more with the south. The landscape in the south is flat and arid whereas here in the north mountains provide the backdrop to much greenery, orange groves, olive trees, vineyards, almonds, and cherries. An area where you will find many beautiful blue flag Mediterranean beaches, sand dunes, watch towers, natural coves, fishing ports and marinas where luxury yachts are moored. Inland you can still find charming Spanish villages and a part of Europe where life goes on the way it has for decades, with siestas religiously adhered to, and local customs and culture still very much a part of everyday life. It is a unique and very special Region in Spain, a stunning area of natural coastal and inland beauty with breath-taking landscapes offering a taste of “Real Spain”, an area dubbed Spain's “Jewel in the Crown” by the British travel Press.

The Costa Blanca North encompasses a region that includes the desirable towns of Altea, Calpe, Benissa, Teulada-Moraira, Benitachell, Javea and the city of Denia, also for the buyer seeking peace and tranquillity, the enchanting inland villages situated in the Jalon and Orba valleys where the land is never far from the sea and coastal resorts are within a 15-to-30-minute drive. There is a first-class range of real estate for sale in Costa Blanca North, from luxury beachfront penthouses to prestigious country properties, and from spectacular coastal villas to apartments.

Costa Blanca North is one of Spain´s fastest growing golfing destinations with first class golf course and 5-star golf resorts with both Seve Ballesteros and José Maria Olazábal having both played a part in designing some of the Region´s courses. There is a tennis academy, ATF, set up by former world professional tennis played David Ferrer from Javea. The Equestrian Centre Oliva Nova is host to the international show jumping competitions MET with competitors from all over the world. The Region is the area of choice for many pro cycling teams and ten of the eighteen World Tour teams have chosen this area for their training camps. Looking to Ski in the winter you have the ski resorts of Javalambre and Valdinares in Teruel, only 2hr 30 minutes away enabling you to drive up to ski in the morning and still be back home in the afternoon should you want to enjoy winter skiing and the winter sunshine . With its 125 km coastline, the Costa Blanca North offers a wide variety of trendy upmarket marinas and yacht clubs, sailing clubs and an abundance of water sports.

What is unique about the property market in Costa Blanca North, Spain?
The Costa Blanca North is classed a very exclusive area within Spain. The British, Germans and Dutch have a long-running love affair here with a Region that is classed as one of the wealthiest in Spain attracting not only the well-heeled from Madrid, and Valencia, who have second homes here but more and more affluent expats from all across Europe and beyond, including North America, the Middle East and Eastern Europe.

Why buy a property with Fine & Country Costa Blanca North?

Fine & Country Costa Blanca North are part of the Fine & Country global network of over 300 offices around the world, specialising exclusively in the marketing and sale of luxury residential property to include resale, new build, and investment opportunities.

This is a property advertisement provided and maintained by Fine and Country Costa Blanca North, Denia (reference 210263_FCD458) and does not constitute property particulars. Whilst we require advertisers to act with best practice and provide accurate information, we can only publish advertisements in good faith and have not verified any claims or statements or inspected any of the properties, locations or opportunities promoted. Rightmove does not own or control and is not responsible for the properties, opportunities, website content, products or services provided or promoted by third parties and makes no warranties or representations as to the accuracy, completeness, legality, performance or suitability of any of the foregoing. We therefore accept no liability arising from any reliance made by any reader or person to whom this information is made available to. You must perform your own research and seek independent professional advice before making any decision to purchase or invest in overseas property.