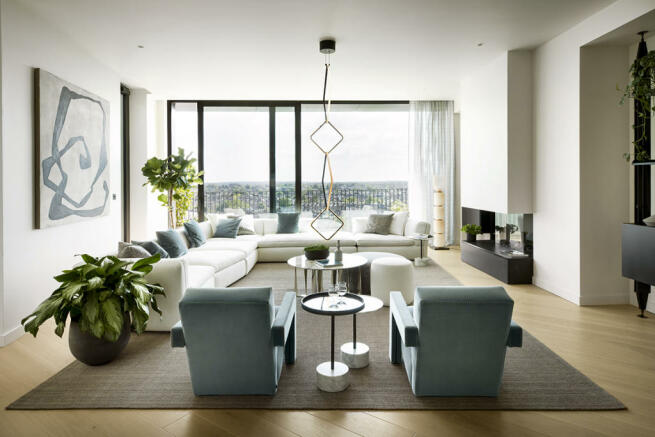 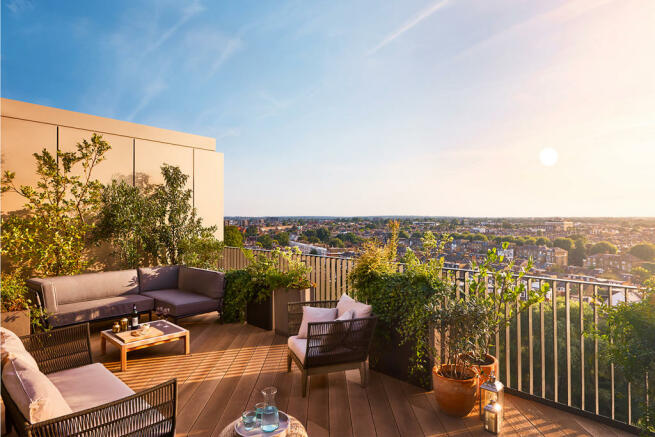 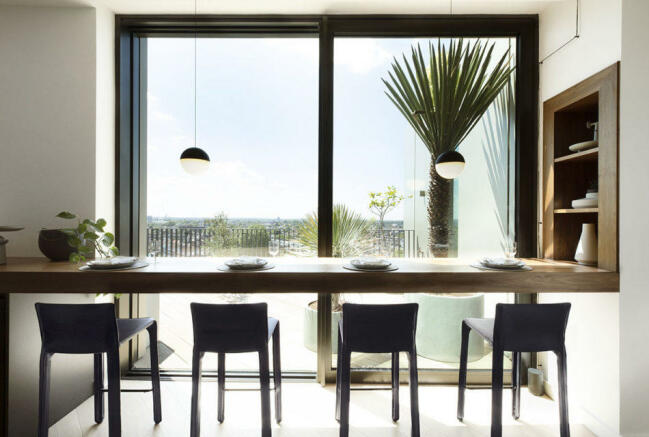 This light and elegant three-bedroom penthouse apartment, with three private terraces, can be found on the eighth floor of Television Centre’s Crescent. It was built to a design by Stirling Prize-winning practice AHMM, lead architects on the award-winning reinvention of the Grade-II listed site, with interiors by furniture and interior designer Cassina.

A landmark piece of modern architecture, Television Centre was the home of the BBC for over fifty years, until its relocation in 2012. The newly built Crescent follows the circular form of the Grade-II listed Helios building, and provides a boundary around the existing building, with views of the private gardens between them, and Hammersmith Park to the west.

This apartment belongs to the ‘Architects’ Series’, one of nine in The Crescent, each individually designed by an architecture practice alongside lead designers AHMM. This one was designed by AHMM themselves, whilst Coffey Architects, Haptic and Piercy and Co. have all contributed a unique treatment of light, materiality and layout for the other spaces.

This particular flat has been furnished by Cassina who were founded in Italy in 1927. They are now the only company authorised to manufacture furniture designed by Charlotte Perriand (1903-1999) alongside other iconic pieces by great modern architects including Le Corbusier, Mackintosh and Rietveld.

Internal accommodation extends to approximately 2,300 sq ft and is arranged in an open, lateral plan. At the apartment’s centre is the kitchen, by Molteni C and Dada Hi Line, with appliances by Miele. A long walnut bar looks out through floor-to-ceiling glazing, onto a large sky garden and far-reaching westerly views beyond. An adjacent gallery, bathed in light from a series of roof lights, allows the kitchen to be closed when necessary, retaining a primary route between the two front bedrooms and the living space.

The gallery leads to an expansive reception space, opening through a sliding-pocket door to a central dining area that serves as a division between the formal and informal living areas. There is access to separate terraces at both aspects. The larger of the terraces looks inward over the enclosed communal gardens and is shared by one of the bedrooms.

All three bedrooms have built-in wardrobes and en-suite bath or shower rooms. From the entrance hall there is access to a guest WC and a separate utility room with terrazzo worktop. The flooring throughout the living areas is engineered timber with Laminam ceramic tiled floor in the kitchen and porcelain tiled floors in the guest cloakroom and bathrooms.

Television Centre is at the centre of an exciting regeneration of the area, with the opening of independent restaurants such as Kricket and the new Soho House members’ club, White City House. Also nearby is White City Place, a creative campus with restaurants, shops and museums, and the new home to RCA’s Schools of Communication, Humanities, and Architecture.

Residents of Television Centre enjoy a range of brilliantly executed amenities, including access to the Soho House gym, a private cinema, 24-hour concierge, and an excellent residents’ lounge with work and meeting spaces.

Disclaimer - Property reference TMH78059. The information displayed about this property comprises a property advertisement. Rightmove.co.uk makes no warranty as to the accuracy or completeness of the advertisement or any linked or associated information, and Rightmove has no control over the content. This property advertisement does not constitute property particulars. The information is provided and maintained by The Modern House, London. Please contact the selling agent or developer directly to obtain any information which may be available under the terms of The Energy Performance of Buildings (Certificates and Inspections) (England and Wales) Regulations 2007 or the Home Report if in relation to a residential property in Scotland.