The Property
The Pele Tower is an impressive 14th Century four storey tower house attached to a 19th Century Tudor style house (in separate ownership). The property carries a Grade II* listing. The tower was originally a vicar’s pele and is of significant historic interest with features which include 8ft thick stone walls, vaulted ceilings, a stone spiral staircase, stone fireplaces and stone flagged floors. These original features really do put the property in a league of its own and buyers really should view to appreciate them and to see how they play their part in the presentation of this timeless building. Accommodation, unsurprisingly, is extremely generous and comprises entrance hall, drawing room, dining room, study, dining kitchen, shower room and conservatory (which forms a most attractive rear entrance to the Tower). To the first floor there are 4 bedrooms and a bathroom. On the second floor there are 2 further bedrooms and a second bathroom (all recently renovated).

The Tower has a wing beyond the kitchen (down to the basement) previously dedicated to independent letting with accommodation comprising:- lounge, kitchen, 2 bedrooms, bathroom and separate WC. The wing is now in need of modernisation.

Externally
The Pele Tower is approached from the road by a private driveway opening into a turning circle with a lovely lawned garden.

Whitton is a small hamlet on the southern bank of the river Coquet, opposite the thriving market town of Rothbury. Rothbury has an excellent range of amenities including First and Middle Schools, doctors, dentist, shops, a cinema, swimming pool, an 18-hole golf course, hotels and restaurants. The town is a popular destination for walkers wishing to explore the Coquet Valley and surrounding countryside. Nearby is The National Trusts’ Cragside Estate, home of Lord Armstrong. Morpeth is around 19 miles distant and offers a wider range of amenities including large supermarkets and designer shops. There is also a mainline railway station giving direct access to Newcastle, London Kings Cross and Edinburgh. 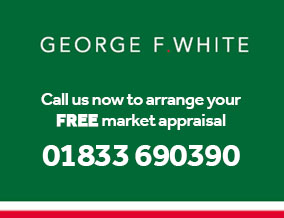 George F. White have been selling and letting property successfully since 1979. Established as one of the region's foremost experts, we offer an unrivalled coverage of the north east, spanning from the Scottish Borders to Humberside.

We recognise that every client is an individual and their home requires a tailored marketing strategy to suit. Whether you are selling a one bedroom property or a large country estate. In addition to our traditional method of sale we are also able to offer

Disclaimer - Property reference ALN150171. The information displayed about this property comprises a property advertisement. Rightmove.co.uk makes no warranty as to the accuracy or completeness of the advertisement or any linked or associated information, and Rightmove has no control over the content. This property advertisement does not constitute property particulars. The information is provided and maintained by George F.White, Alnwick. Please contact the selling agent or developer directly to obtain any information which may be available under the terms of The Energy Performance of Buildings (Certificates and Inspections) (England and Wales) Regulations 2007 or the Home Report if in relation to a residential property in Scotland.