A Grade II listed six bedroom former farmhouse in a peaceful location at the end of a no through road in the conservation area of Stone adjacent to the village church. The main house has over 4,030 sq. ft. of versatile accommodation with cellars on the lower ground floor, and four reception rooms, a kitchen/breakfast room, a separate utility room, a boot room and a cloakroom on the ground floor. There are four bedrooms on the first floor, two with en suites, and a family bathroom. The remaining two bedrooms and a store room are on the second floor.

In addition to the accommodation in the main house the property also has two stone outbuildings which both have planning permission in place to convert them into additional accommodation.

There is extensive off street parking on the driveway and a detached oak framed garage and carport with space to park three cars. The plot extends to over 0.5 acres with a walled garden which wraps around the farmhouse.

The property dates back to the 17th century with later additions over the centuries so that it has examples of several different styles of architecture blended together. Period features have been retained throughout and include exposed beams and timbers, sash windows with window shutters, flagstone flooring and fireplaces.

The dual aspect sitting room measures over 30ft. by 15ft. and has exposed beams, an inglenook fireplace with a large log burner, and French doors to the garden. There is a range of fitted cupboards and bookshelves at one end of the room. The dining room also has a fireplace with a log burning stove, and exposed beams and timbers. There are dual aspect sash windows, one set of which has wooden shutters, with views over the garden and the church tower beyond. This room was formerly the main kitchen and still has the original housekeeper's bells, a flagstone floor, and an inset shelved wall cupboard to store crockery. The study has dual aspect windows with shutters, a fireplace with a log burning stove, and built-in cupboards. The family room connects the sitting and dining rooms and has a stone floor, access to understairs storage, and a door to the garden.

The kitchen breakfast room has triple aspect windows, with traditional wooden shutter, which allow in plenty of natural light and provide views towards the church. A recess with a beam over houses a traditional Aga and there is also an Aga gas hob and electric oven module. There is a walk-in larder and a range of units, including drawers and display shelving, a one and a half bowl sink and drainer, and space for a dishwasher, an American style fridge freezer, a dresser unit and a breakfast table and chairs. The utility room has a door to the drive, a sink and space for appliances.

Two staircases, one from the rear hall and one from the dining room, lead to the first floor. The stairs from the rear hall lead to the two principal bedrooms which are both dual aspect. The main bedroom has an en-suite bathroom which includes a free-standing slipper bath, a double-sized shower cubicle and twin basins set into a range of vanity storage. The second bedroom has an en suite shower room. The first floor also has two further double bedrooms, both of which have vaulted ceilings and character features including exposed beams. One of the bedrooms has a built-in cupboard and the other has access to a store room in the eaves. The family bathroom has a four piece suite.

There are two further bedrooms on the second floor and a large store room.

The private gardens measure just over 0.5 acres, are enclosed by a combination of brick and stone walls, and wrap around two-thirds of the farmhouse. There is a brick lined well and a private gate to the adjacent churchyard. The garden is mainly laid to lawn with several mature trees interspersed including apple, plum and cherry trees. The property is approached via a five-bar gate, and has a large courtyard parking area bordered by two stone outbuildings and a traditional 3-bay oak framed garage block with a garage and double carport.

The larger of the stone outbuildings has a pair of landmark white dovecotes on the upper storey and planning permission is in place to convert it into a one bedroom annexe which would be suitable for guests or could be rented out as a holiday let. The second outbuilding currently has storage on the ground floor and a gym in the hay loft above. This building also has planning permission for improvements and could be converted into a home office, hobby room or children’s den.

The property is within 10 minutes’ walk of the amenities in Stone which include a local shop/post office, a village hall, a Church of England combined school, restaurants, public houses, a church and Hartwell House Hotel and Spa. For a more extensive range of amenities, Aylesbury is just 3.3 miles away and has shops, social and sports facilities including the Waterside Theatre, and restaurants. Aylesbury has grammar schools, a college and a university and the railway station has services to Marylebone in 56 minutes.

Established for over 50 years, Michael Graham has a long heritage of assisting buyers, sellers, landlords and tenants to successfully navigate the property market. With fourteen offices covering Aylesbury and the surrounding villages as well as the neighbouring areas of Buckinghamshire, Bedfordshire, Cambridgeshire, Hertfordshire, Northamptonshire, Leicestershire, Warwickshire and Oxfordshire, we have access to some of the region's most desirable town and country homes.

Give Your Home O
More properties from this agent 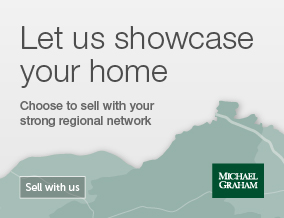 Disclaimer - Property reference AYL200018. The information displayed about this property comprises a property advertisement. Rightmove.co.uk makes no warranty as to the accuracy or completeness of the advertisement or any linked or associated information, and Rightmove has no control over the content. This property advertisement does not constitute property particulars. The information is provided and maintained by Michael Graham, Aylesbury. Please contact the selling agent or developer directly to obtain any information which may be available under the terms of The Energy Performance of Buildings (Certificates and Inspections) (England and Wales) Regulations 2007 or the Home Report if in relation to a residential property in Scotland.