BACKGROUND AND HISTORY A charming three-bedroom waterside cottage with a wealth of history and character, dating back to 18th Century, albeit not listed. The property was originally one of the six historical public houses in Heybridge named the 'Chelmer Brigg' and more recently owned by the same family for the past 50 years. 'Miranda Cottage' now forms part of a row of cottages down by the lock, having a defining weather boarded front façade with rear elevations providing accommodation behind the line of its neighbouring properties, known as a flying freehold. Another great benefit to this property is the two part cellar with power, plumbing and lighting and to the rear, the property benefits from having parking and a garage, together with additional permit parking adjacent to the lock.

SETTING AND LOCATION The property is situated in an enviable location, adjacent to the Chelmer & Blackwater Canal Lock with its traditional Towpath at the mouth of the Canal which flows into the Blackwater Estuary. A popular coastal & waterside destination with views across the estuary from the property, allows for immediate walks alongside the canal and along the sea wall with numerous places to rest and enjoy the surroundings, together with a choice of pubs and Tea Rooms for refreshment. The village is also home to the Blackwater Sailing Club with the river being an active hub for boats and yachts of varying sizes, together with holiday barges enjoying the canal. Across the water from Heybridge is Northey Island which is run and owned by the National Trust, being accessible from Maldon at Low tide. The Essex Coast Path passes the property and continues east to Goldhanger and the marshes at Tollesbury and to the west is Maldon and beyond on to The Dengie Hundred.

Local amenities can be found in Heybridge for day to day needs with a further choice of larger supermarkets and shops found 3 miles from the property in the Maritime town of Maldon. Heybridge has its own primary school with Maldon offering both primary and secondary education. The nearest rail station is at Witham with train journey times into London being approximately 45 minutes.

To view this media, please visit the on-line version of this page at www.rightmove.co.uk/property-for-sale/property-75950407.html?premiumA=true 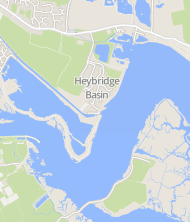 Disclaimer - Property reference 102787001336. The information displayed about this property comprises a property advertisement. Rightmove.co.uk makes no warranty as to the accuracy or completeness of the advertisement or any linked or associated information, and Rightmove has no control over the content. This property advertisement does not constitute property particulars. The information is provided and maintained by Zoe Napier Coastal and Waterside, Essex & South Suffolk. Please contact the selling agent or developer directly to obtain any information which may be available under the terms of The Energy Performance of Buildings (Certificates and Inspections) (England and Wales) Regulations 2007 or the Home Report if in relation to a residential property in Scotland.