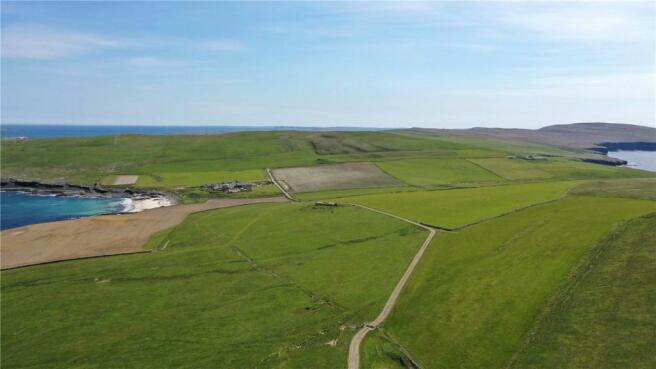 DESCRIPTION
In their spectacular clifftop position as Orkney’s most northwestern property, the farms of Noup and Longhouse and the Land at Bisgeos create an extensive ringfenced and diverse holding and an opportunity for a purchaser wishing to take on an existing agricultural property or those seeking a property ideally situated for personal enjoyment with the assets and resources to develop new enterprises and income streams.
Advertised in three lots but currently farmed and managed as a single property, the main farmhouse, farm worker’s cottage and yard at Noup Farm are set immediately adjacent to the
Bay of Noup, with direct access to a private sandy cove and beyond to the spectacular Noup Head where the property extends to the clifftops. With less than a mile of council maintained roads separating their respective farmyards, both
Noup Farm and Longhouse Farm are similarly arranged, with their houses set beside farmyards of modern and more traditional stock and store buildings. Their ring-fenced lands extend directly from each farmyard. Both farms are fully equipped allowing them to be operated as separate holdings or in their current arrangement as a single larger farm. The Land at Bisgeos, adjoining Longhouse Farm, consists of grasslands on which sheep currently graze. The land is predominately grassland arranged in large, fenced and gated fields with the
buildings at Noup and Longhouse farmyards providing housing for up to 150 cows alongside feed and general storage and workshops. The landscape, which includes grassland, heathland,
wetland, cliffs and shoreline, alongside the adjoining RSPB Reserve at Noup Head, creates a diverse and unique habitat for many native and rare species, including sea otters, seals, migratory seabirds, sea eagles and puffins. Across all three lots, the land is classified as Class 6(2) and Class 6(3) by the James Hutton Institute for Soil Research. The soil is of the Olrig series being Greyish brown drifts derived from Middle Old Red Sandstone flagstones and sandstones with component soil types being peaty gleys and the similarly derived Mousland Series with component soils being saline gleys. The property is in most part served by council maintained public roads, with a section of private road leading from the final bend in the public road to Noup farmyard (approximately 100m) and on to Noup Steading (approximately 450m thereafter). The access road from Noup Steading to the Noup Head Lighthouse (Grade B Listed) is owned and maintained by the Northern Lighthouse Board, over which a right of passage is held. Of all the Orkney Isles, the residents of Westray in particular are known for their entrepreneurial
flair, with many local businesses and cottage industries thriving both across the island and beyond. The numerous dwellings and buildings (including steadings) at the property offer limitless opportunities for a purchaser wishing to diversify, in full or part, from the existing agricultural nature of the property.

LOT 1: NOUP FARM
In all, 577.67 acres (233.78 hectares) of permanent and temporary grassland alongside a farmhouse and cottage, farm
buildings and stone steading.

LOT 2: LONGHOUSE FARM
In all, 300.97 acres (121.80 hectares) of grass and heathland alongside a farmhouse bungalow and farm buildings.

SITUATION
The farms of Noup and Longhouse and the Land at Bisgeos make up a large portion of the striking Noup Head, the most northwesterly peninsula on the Isle of Westray, providing dramatic and uninterrupted clifftop views across the Atlantic Ocean. Known as ‘The Queen of the Isles’ with good farmland, hilly moorland, magnificent cliff scenery and attractive sandy beaches, Westray lies approximately 20 miles north of Orkney Mainland and is served by both ferry services and an airport. At only 10 miles in length, Westray offers a unique island way of life for those looking for a change of pace and a new adventure or the rare opportunity to purchase and operate a viable island agricultural business. With a vibrant population and reliable transport links to Mainland Orkney, Westray benefits from a range of services including convenience stores, churches, medical centre, post office and banking services alongside recreational facilities, tourist accommodation and restaurants, allowing the purchaser to become fully immersed in island life. Primary and junior schooling is available on Westray, with a
senior secondary school providing weekday pupil accommodation on Mainland Orkney. Westray is the most prosperous of the North Isles, with a traditionally strong agricultural and
fishing culture set alongside emerging produce and creative industries and strong visitor numbers making the Island a truly thriving place to live. Noup Head, where the property is located, extends into the Atlantic Ocean as Westray’s north west peninsula, with uninterrupted, breathtaking sea views and a dramatic coastline, with the rocky cliffs of the headland home to a vast array of nesting seabirds.

From Kirkwall on Mainland Orkney, take the Orkney Ferry to Westray (Rapness). From the ferry terminal take the B9066 north towards Pierowall. Once in Pierowall, take the first left hand turning past the Pierowall Hotel (sign posted Noltland Caste and Noup Head) and continue past the ruined castle before turning left at the junction. From here, after 0.5 miles, Longhouse Farmhouse, buildings and land will be on the right. Continue for another 1.0 miles and Noup Farmhouse and buildings are situated on the left.

Alternatively, flights are available to Westray airport via Papa Westray.

To view this media, please visit the on-line version of this page at www.rightmove.co.uk/property-for-sale/property-83469152.html 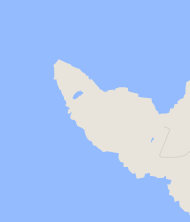 Disclaimer - Property reference ABR190005. The information displayed about this property comprises a property advertisement. Rightmove.co.uk makes no warranty as to the accuracy or completeness of the advertisement or any linked or associated information, and Rightmove has no control over the content. This property advertisement does not constitute property particulars. The information is provided and maintained by Savills, Aberdeen. Please contact the selling agent or developer directly to obtain any information which may be available under the terms of The Energy Performance of Buildings (Certificates and Inspections) (England and Wales) Regulations 2007 or the Home Report if in relation to a residential property in Scotland.