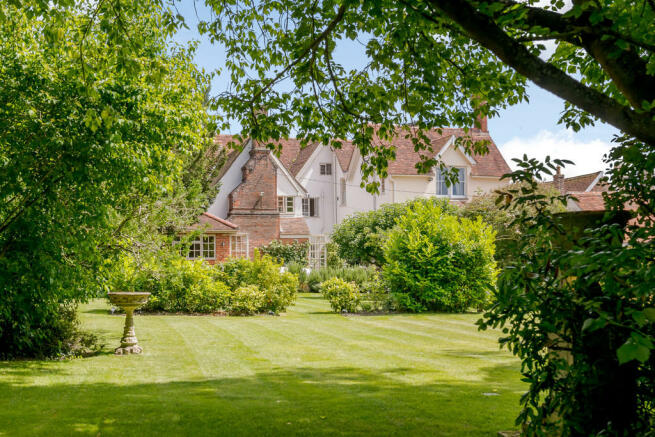 THE PROPERTY Jason House is an impressive period house located on The Green in the sought after village of Long Melford. It is one half of an impressive period grade II listed house dating back to the 16th century. Viewings are highly recommended as anyone to do so will be pleasantly surprised by the grandeur of the interior and garden which is deceptively belied by the discrete entrance way. This is an added attraction to anyone who might want a country retreat or lock-up and leave property.
This property has been thoughtfully and tastefully renovated over four years and the result of all this work is a home with an overriding feel of elegance and luxury.

The ground floor consists of an entrance hallway leading to a large dining room with a fire place, limestone flooring, painted pannelled walls and a window looking onto the light and airy paved courtyard, a warm and cosy reception room with a working log burner, a bespoke fully fitted kitchen/breakfast room with solid marble work surfaces and remote controlled skylights, a good size utility room with Belfast sink and a downstairs cloakroom which becomes very useful when guests come to visit.

The first floor is accessed via an impressive staircase with wooden balustrade leading to a spacious landing area. The master bedroom has double aspect views onto the garden and paved courtyard, exposed wooden beams, vaulted ceilings, wooden floors and a convenient storage cupboard. There are a further three double bedrooms all with fitted storage (one has a walk in wardrobe). There is a possibility to increase the number of bedroom to five by turning the second of three dressing rooms into a bedroom. There are two beautifully appointed bathrooms (one is en-suite) all equipped with Lefroy Brooks and Chadder suites.

The established and beautifully landscaped southwest facing garden offers the perfect space for outdoor entertaining and is also the perfect solution should you wish to relax in a quiet and totally private environment. As an added attraction there is a paved courtyard with a wooden pergola offering the perfect set up for outdoor dining. There is an office/studio and two further outbuildings which serve as the ideal storage solution. Finally, there is a converted barn at the front of the property offering garaging for two cars and remote up and open garage door.

Sources include a Times property supplement feature on the building in 2011.

The vendors inform us that the above link was passed to them by the previous residents of Falkland House. The information about the pub was passed to them from a neighbour who came across it when researching his own property. He was carer to Commander Needham, who they purchased Jason House from in 2013, who also knew the house's pub history.

Thought to be built in 1500 as a Hall House (the oldest house on The Green is our direct neighbouring house 'Falkland Cottage' - Circa 1490). The house is rumoured to be connected to Mary Boleyn through its ownership by her son Henry Carey (1526-1596), thought to be the illegitimate child of Henry VIII. He was made ward to Anne Boleyn as a child and later one of Queen Elizabeth I (his 1st cousin or possibly step sister) favorites and personal body guard. He was later to become ennobled as 1st Baron Hunsdon in 1559 during Elizabeth I reign, refusing the title of Earl of Wiltshire she offered him on his death bed.

Prince William, Duke of Cambridge, Elizabeth II grandson and presently second in line to the throne, is 13th great-grandson to Henry Cary, 1st Baron Hunsdon, through his mother the late Diana, Princess of Wales.

Another famous owner was the 9th Viscount Falkland, Captain Charles John Cary (1768-1809) (likely the origin of the name 'Falkland' House). An intimate of Lord Byron he was mortally wounded in a duel after calling his friend Arthur Powell by the nickname "Pogey" when drunk, the two duelled and Cary died. Lord Byron was devastated at the loss of his friend. ? if it was this period that the house had a face-lift to the present Georgian style.

The house was one dwelling until the mid 1800's. It was owned by 2 sisters at the time, one of who was seeing a particular gentleman. Unknown to the first sister, he started seeing the second sister also. When the first sister found out they never spoke again and they split the house into 2. It is rumoured he continued to have a key to both houses afterwards.

Jason House was used as a pub in the 1800's called 'The Three Bells' after the 3 bells in the tower of the neighbouring Holy Trinity Church. Downstairs was reserved for the better heeled / gentry, upstairs (front bedroom with bay window) for the more common person, the door to that bedroom's the dressing room shows marks where the door was used to open bottles when there wasn't a bottle opener present.

The present owners purchased the house from Commander Peter Needham (now deceased) who was the last Commander of the HMS Belfast before the ship was retired.


THE LOCATION Long Melford is a fine village characterised by its wide variety of architecture, antiques shops, pubs, restaurants, and famous green dominated by the Holy Trinity Church. The nearby market towns of Sudbury (three miles) and the cathedral town of Bury St Edmunds (fifteen miles) offer a comprehensive range of facilities, the former with a commuter rail link to London Liverpool Street.

To view this media, please visit the on-line version of this page at www.rightmove.co.uk/property-for-sale/property-83486267.html?premiumA=true 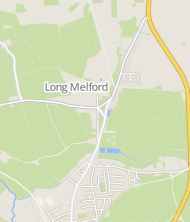 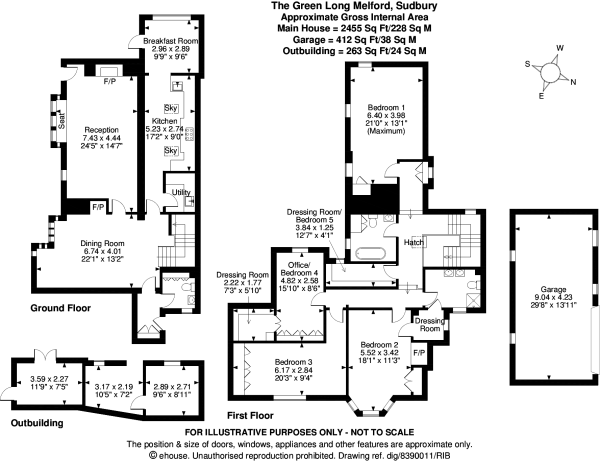 Disclaimer - Property reference 102741005989. The information displayed about this property comprises a property advertisement. Rightmove.co.uk makes no warranty as to the accuracy or completeness of the advertisement or any linked or associated information, and Rightmove has no control over the content. This property advertisement does not constitute property particulars. The information is provided and maintained by Fine & Country, Colchester. Please contact the selling agent or developer directly to obtain any information which may be available under the terms of The Energy Performance of Buildings (Certificates and Inspections) (England and Wales) Regulations 2007 or the Home Report if in relation to a residential property in Scotland.