Bieber or Styles? Ant or Dec? Jamie or Gordon? 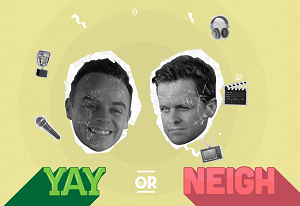 From some of the biggest names in showbiz (we’re looking at you Dame Helen Mirren) to sporting legends, world famous chefs to rock gods, they’re all battling for your votes in what we’re (potentially mis-) labelling as ‘the poll to end all polls’.


At the time of writing, Keira Knightley is currently leading the charge with a whopping 59% of people saying ‘yay’ to having her as their next door neighbour. Things aren’t look quite so rosy for poor old Wayne Rooney though who is coming last with just 16% of the vote.


But the fun doesn’t end there…


As part of the Yay or Neighbours poll we’re also asking the nation who their favourite One Direction members are. Harry Styles is currently leading the pack, but there’s still plenty of time for the scores to change!


To add your vote to our ‘Yay or Neighbours’ poll, simply head over to www.rightmove.co.uk/viz/yay-or-neighbours/