Formula One Legend Nigel Mansell’s former home up for sale 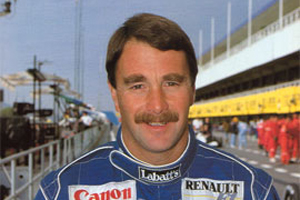 With a career spanning 15 seasons and holding the 4th position on the Formula 1 winners list (behind greats such as Michael Schumacher), it’s no surprise that Nigel Mansell is seen as a legendary British racing driver. And now the star’s former home is available on Rightmove.

Often referred to as ‘Mansell Mansion’, the 7 bedroom property is up for sale for £3,950,000. Merehaven Manor, situated in Exeter, was built for Nigel in 1995 to his exacting standards. His design stamp is clear throughout the property with a mixture of international influences and traditional architecture. The estate, set in around 58 acres, boasts a gym, sauna, stables, separate annexe and unsurprisingly a triple garage which apparently once held Mansell’s 6 Ferraris.

The Formula 1’s former home also comes complete with a 5-hole private golf course, gardens, a lake ideal for water-skiing, and last but not least 15 toilets… yes that’s right 15 toilets! If the sheer amount of loos isn’t enough to woo you, then perhaps the 37ft long kitchen and the skittles alley will?

It’s been reported that when Mansell sold the property a few years back there was a lot of ‘celebrity’ interest including attention from Coldplay’s Chris Martin. While Nigel now allegedly lives in Jersey, the house still very much honours the great racing legend, so if you fancy living like ‘The Lion’ then check it out now!