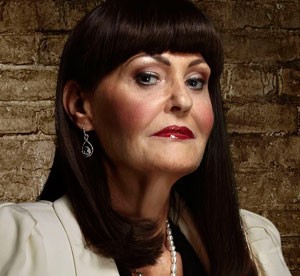 Dragon’s Den’s newest entrepreneur, Hilary Devey, has put her five-bedroom house on the market for £2.2 million. The grade II listed property is literally ‘fit for a king’ and was built specifically for King Edward VII in honour of his 1902 royal visit.

The King Edward VII Wing of Rangemore Hall in Staffordshire boasts regally proportioned rooms, a King’s study and a storage room originally built for the crown jewels – how posh! It doesn’t stop there however; the intricate wall and ceiling work, carved marble chimney pieces, handmade furniture and the lovingly restored King Edward VII bathroom mean there is no denying the noble status of the property.

The 12,823ft2 piece of history also offers a little bit of mystery… A concealed stone spiral staircase leads to a discrete flat that is said to have been a separate section for the King and his entourage; however rumour has it that it was built so King Edward could have quick access to his mistress Alice Keppel – the cheeky devil!

Rangemore Hall is sure to have provided Hilary the rest and relaxation needed by a hard-working tycoon; with a swimming pool, jet swim system,  sunken spa bath and stunning views over 9 acres of extensive lawns, it’s somewhat surprising that the Dragon would want to let it all go.

Hilary, who was named Business Woman of the Year in 2008, has owned the property since 2006, but there’s no doubt that with her new career in full swing she’ll be looking for a new majestic pile just as magnificent closer to the Den soon.

Here are some grandiose properties that might tickle her fancy: