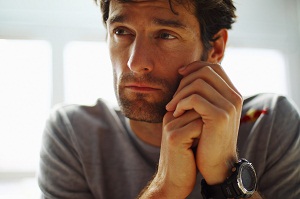 Rightmove caught up with F1 star Mark Webber to see how the home comforts of Buckinghamshire make him a different person away from the track.

He’s one of world’s leading F1 racing stars, has properties and holiday homes scattered far and wide, and lives something of a dream jet set lifestyle. But Red Bull Racing driver Mark Webber insists that home isn’t the French Riviera, nor luxurious Dubai, or even his native New South Wales… instead, it’s the sleepy Buckinghamshire hollow of Aston Clinton.

“Logistically, it made absolute sense to move to this part of the country,” he begins, speaking exclusively to Rightmove. “Aston Clinton is a quiet place – the population is around 3,000 people – and we’re tucked away from it all. But we’re still central to all the major airports. And most importantly, the Red Bull factory, AKA the day job, is close by!”

It’s just as well Webber is so settled in his home life, as the 35-year-old is gearing up for an exciting end to the F1 campaign, given that he is locked in a four-way battle for second place in the Drivers’ Championship behind runaway leader and Red Bull team mate Sebastian Vettel.

But away from the track, Webber – who lists Alain Prost as his ultimate F1 hero – is anything but the chisel-jawed adrenalin-fuelled driver we’ve come to respect. After all, the leafy charm of Aston Clinton is a world away from the tyre smoke of the pit lane.

“When you move to a new country, as I did in 1995, finding somewhere to live is a completely blank canvas; and that can feel quite daunting because it’s difficult to know where to start. But I quickly fell in love with the Chilterns. Not only is the area beautiful, but it’s a great place for outdoor training – plenty of places to mountain bike especially, which I love, and there are lots of wide expanses where the dogs can stretch their legs.”

Indeed, Mark has taken to life in Blighty so readily that he’s even taken ownership of a good old-fashioned British pub – The Stag Inn in Mentmore, which he oversees with his partner Ann. Sadly, for the regulars, the champagne passed around on the winners’ podium rarely makes it back to the drinking hole, which has been transformed from a sparse run-down dive over the past two years.

As for the place he calls home, the traditional ‘Rookery House’, set in 10 acres, comes complete with an elegant driveway, sculptured gardens, and multiple references inside to a passion for sport. There are endless trophies and awards, but also autobiographies and mementos relating to the great names in other sports.

“The measure of whether I enjoy racing isn’t always down to winning, although that’s a major part, obviously. Sometimes the travelling involved and the atmosphere can really be special even when the racing doesn’t go to plan.

“And I always enjoy the British Grand Prix because I don’t have to pack a bag! Silverstone is about an hour from Aston Clinton, so that’s another reason why Buckinghamshire made so much sense. The fans in this country are great too – they’re always in full force, rain or shine. And as you’d expect, going back home to Australia is always special too, as is Monaco.”

So given his love for Buckinghamshire and its ideal location for your everyday F1 racing driver, should Mark expect to see a clutch of other names from the starting grid descend on the neighbourhood?

“I hope not,” he laughs. “I don’t socialise much with other racing drivers, for the simple reason that it’s nice to have a separate life outside of Formula One – I see those guys every week, after all!

“And I like my home life as it is because I’m very different away from the track. I’ve got a Porsche which counts as a bit of a toy, but I’ll take the dogs out in a Nissan Navara – very rock and roll! And in my spare time I like to watch or try my hand at most sports – rugby league, road cycling, mountain biking, cricket, tennis. I’m not sure what I’ll do when I retire from racing, but I know I won’t be sitting around the house watching telly!”

If you fancy rubbing shoulders with the racing driver then check out these beautiful properties in the area Mark calls home: