Dream Houses in film – Plus your chance to win! 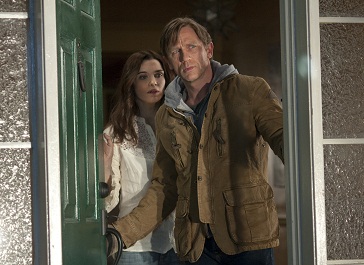 When looking for your new pad, do you ever wish for that perfect home from the movies? In DREAM HOUSE, successful publisher Will Attenton (Daniel Craig) quits a high-power job in Manhattan to relocate his wife, Libby (Rachel Weisz), and two girls to a quaint New England town.

To celebrate the release of DREAM HOUSE on November 25th 2011, we take a look at dream homes from the big screen!

Click here to be in with a chance of winning a home theatre system, Blu ray player and a horror DVD bundle!

(scroll down for more details)


Ok, ok, cheating slightly we know, this isn’t a house from a movie but ut we simply had to include Highclere Castle. The magnificent house in Hampshire was designed by the same man who designed the Houses of Parliament!  Sadly Highclere Castle isn’t for sale, and has been the country seat of the Earls of Carnarvon since 1679.


There is not one, not two, but three fantastic homes in this film; two in England, and one across the pond in LA! When Amanda and Iris home-swap for Christmas, they find themselves in very different settings – Amanda’s home is an ultra modern, ultra stylish pad in LA, whilst both Iris and Graham’s homes are traditional country cottages that the beautiful British countryside is famed for.


When the director of the film is a fashion designer, it’s clear the film locations will be stunning. George’s house in A Single Man is no exception to this, and its dark wood and large glass walls scream sophistication.

The house from Up is so well loved; a real version of the animated home was build in 2009. With its colourful outside walls and timeless 50’s interior, there really is so much more to the house that Carl is desperate not to leave behind!


A very precise description of the Cullen’s house was given in the Twilight novel, so the film version had to be perfect. Luckily there was a perfect match for the vampire’s extravagant and yet classic styling, a beautiful contemporary home belonging to director of footwear design at Nike, John Hoke.


The house in Notting Hill with the blue door, the real-life home of writer and producer Richard Curtis, became such a tourist attraction after the film’s release that house prices in the area shot up! Sadly after Mr Curtis grew tired of the publicity, the blue door was sold for charity.

The early 90’s classic starring Robin Williams also features a beautiful Victorian house in San Francisco. In the film, Miranda Hillard (played by Sally Field) is an interior designer so naturally the house looks beautiful, and was sold in 1997 for $1.395 million!

When Kevin was left alone in his fantastic house in this family Christmas favourite, didn’t you just want to be there with him?!?! With every room decorated in traditional green and red, that amazing master bedroom, and enough rooms to make sure your pranks on the bad guys leave their mark, it’s no wonder this huge house is worth nearly $2million!

DREAM HOUSE is released in cinemas on November 25th.

To be in with a chance of winning simply click here to be taken to the Rightmove Facebook page where you’ll be asked a simple question about the content above.