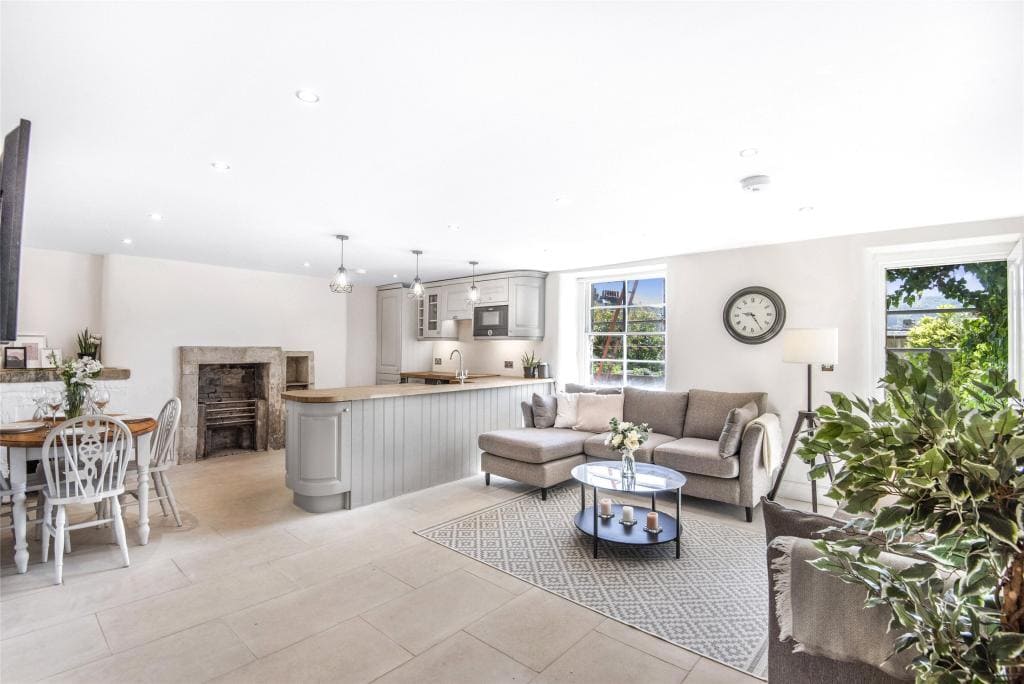 This lush Georgian flat was once a ‘creepy dungeon’

Restoring period properties can be hugely rewarding passion projects, but they often require months – if not years – of patience, dedication and hard graft.

In this article we spoke with one such developer, Jamie Barrow, who has spent four years restoring the derelict basement of a Grade I-listed Georgian townhouse into a beautiful home.

As you’ll see below, the property is almost unrecognisable in the before and after pictures.

How did you start renovating properties?

How did this opportunity arise?

What did you do first?

How much have you spent on the renovation?

How much work did you do yourself?

What was the biggest hurdle?

What’s been your biggest lesson?

Any advice for people planning their own listed renovation project?

What are you most proud of?

Here is Jamie, Britain’s fastest snowboarder no less, explaining in his own words how he went about orchestrating such a transformation, as well as advice for budding developers.

How did you start renovating properties?

I’ve been developing property for about eight years now. It started initially as a hobby, because I’m also a professional snow boarder, so in the winter I’m away in the mountains and in the summer I needed to do something to keep busy.

So I started with a small project, and then I flipped it and made more than I thought. I realised that this was something I could do for a living, and now I’ve got a passion for renovating properties and I’ve set up my own property development firm since then.

I’ve renovated six properties so far and they’ve all been in Bath, which is probably the hardest place to start as there are so many listed properties here. But luckily I hit the ground running and I’ve learnt so much over the years. 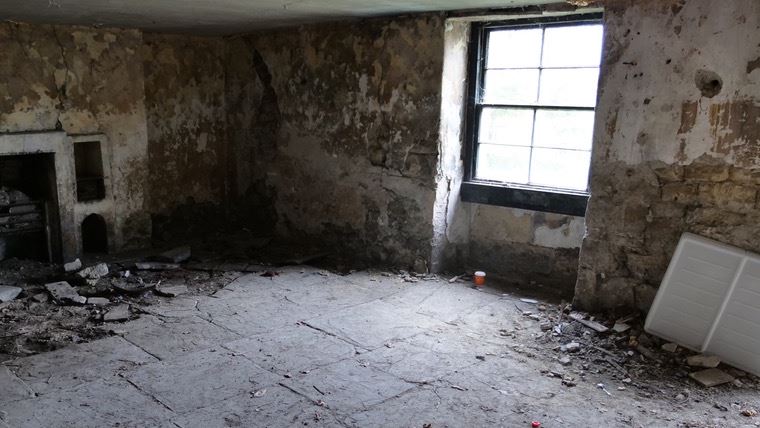 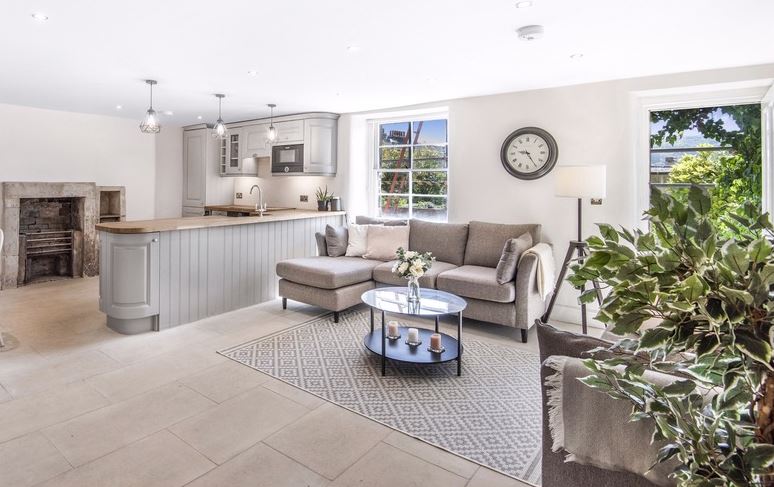 How did this opportunity arise?

I’d been sticking to renovating one and two-bed flats, but I was looking for a bigger project. I already owned a property on the top floor of this particular building.

It’s a gorgeous Georgian townhouse which is part of an iconic terrace designed by Thomas Attwood and built in 1768.

I was made aware that the basement and sub-basement were available to buy and after a year or so of negotiations it was mine. But it had been left completely derelict, it was like a creepy old dungeon. It was the former communal area of the building, but it had so much potential. 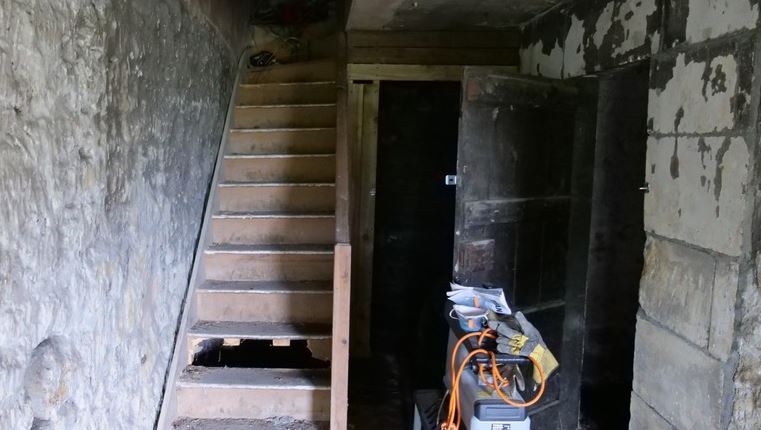 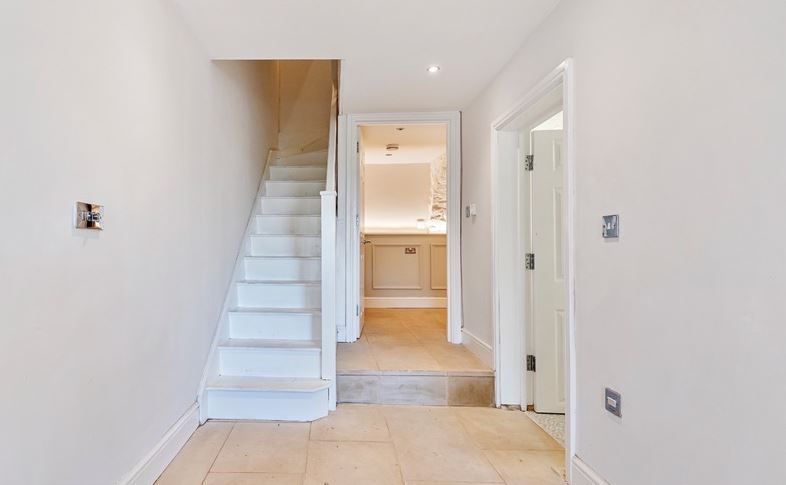 What did you do first?

I can’t really put into words just how much work needed to be done. I didn’t want to go down there alone at night, it was genuinely quite scary. I should have leased it out to some Hollywood film company to make a horror movie, it was that bad; really eerie. I imagine that’s why no-one wanted to touch it.

But an architect designed the initial drawings and we went from there. It was the first time I’d worked on a Grade I-listed building and I’d heard stories about how hard it is. But I took advice and most of what we put forward was accepted by the council.

That said, the Listed Building office at Bath & North East Somerset Council are quite strict, but that’s the way it should be. One thing they wanted us to keep was a rotten staircase even though it wasn’t an original and was totally wrecked.

That’s because when you buy a listed building, everything in that building is essentially listed, too.

I guess it’s because years ago, people were actually knocking these buildings down, which is madness. They’re gorgeous buildings.

I was learning on the job. Just working with what you’ve got is very hard. For example, we couldn’t move any of the walls and had to stick with the layout we had. 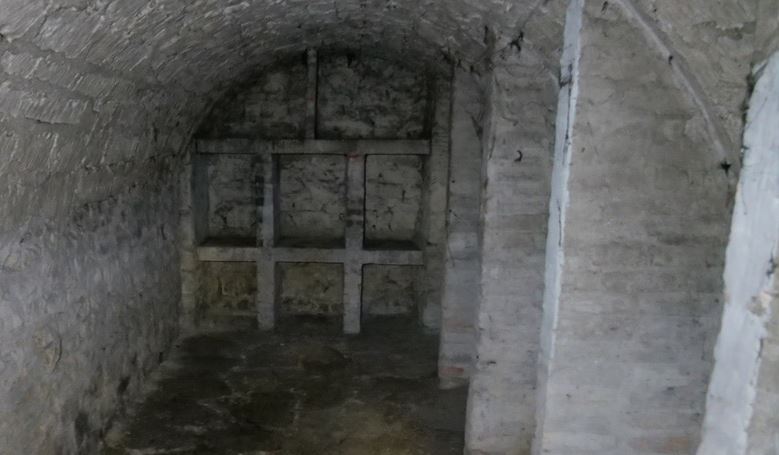 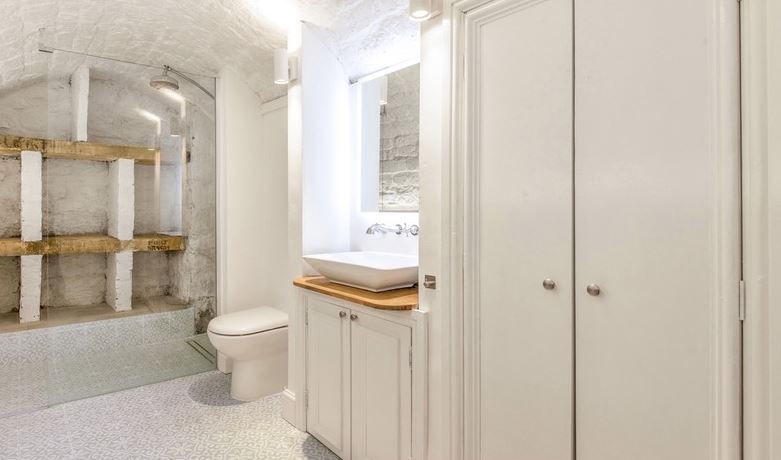 How much have you spent on the renovation?

All told, I’ve spent about £110,000. That’s mainly because it was totally uninhabitable when I bought it – it had no services. No water, no electric, no gas.

We had to put new water mains into the property and dig up the road in front to do that. There are so many unknowns that you don’t budget for. Where the second bedroom is now, there wasn’t actually a window in there, so every time it rained, there was just a stream of water coming through. Funnily enough that was the only source of water we had for a while!

So you can image the damp issues that arose from that, and that was a big issue as we had to address how to dry the place out.

We then had to put in a new sash window that was the same spec as the originals – single-glazed, had to match the same as the others and look how it would have done, which was strange but part of the process.

I don’t think the basement was ever officially lived in. There were no electrics in there, so it was potentially empty for over 100 years. 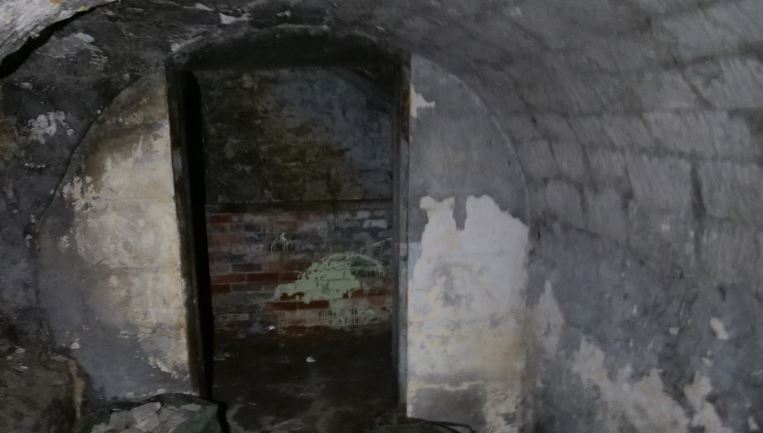 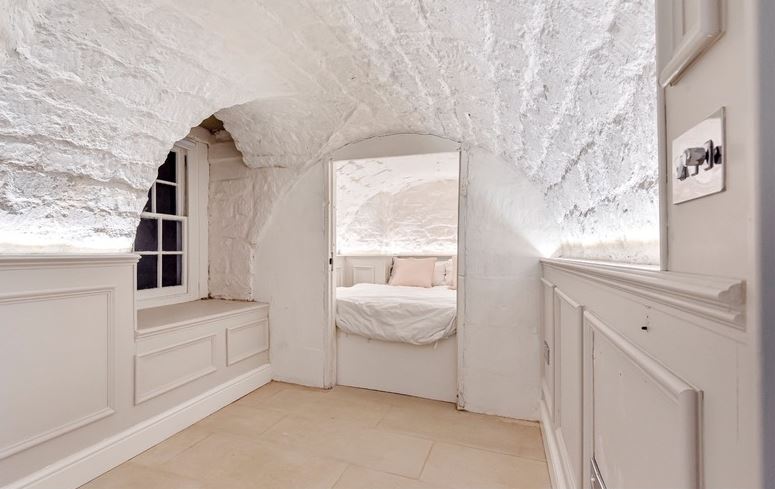 How much work did you do yourself?

I did as much as I could, but we had contractors in for the big work.

Even seemingly small things like the plastering – we had to use lime plaster with horsehair in it because it’s more breathable, what they used back in the day, and has a more natural finish.

All the corners are rounded as well, because that’s how they used to do it.

I was then able to do the painting and decorating, and we actually prepped the site before the main work happened.

One of my biggest victories was what I did with the garden. It was honestly like Jurassic Park out there, like a big rainforest. It took me three days to cut it all down and I was genuinely surprised at how big the garden was! 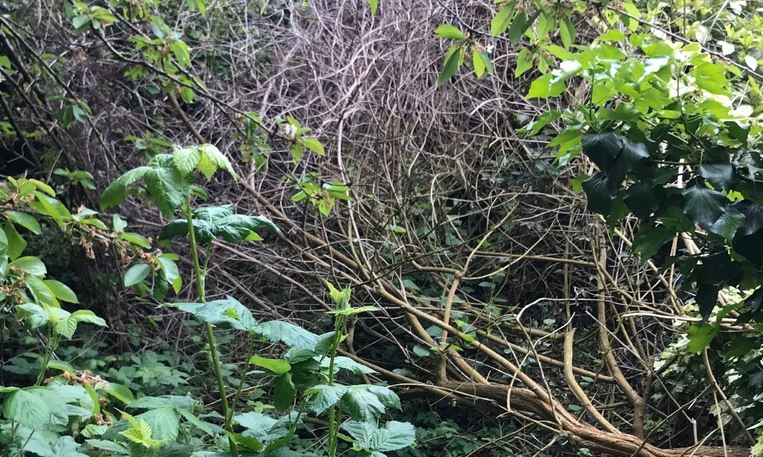 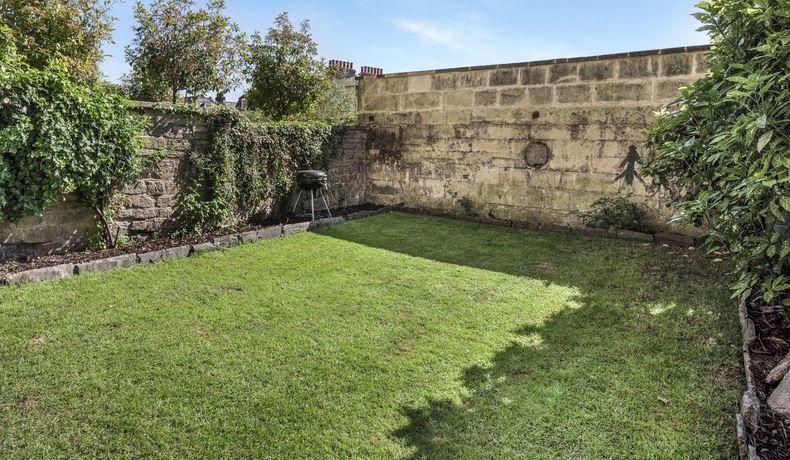 What was the biggest hurdle?

Well, half the floor on the lower level was dirt. In theory, we were not allowed to touch it because it was listed. It took a lot of persuasion for the council to let us put down new Bath stone flooring.

But you can’t just go to the shop and buy Bath stone, it’s not a typical material. After more research, I found the original mine where Bath stone comes from.

The people there came to have a look and identified what was already in the property as stone that most likely came from their mine.

We got permission to go down the mine and watched them taking the stone out of the mine. We used a local stone mason to cut it into slabs for the flooring, and that was something I felt very proud of, because it was in keeping with the property’s history. 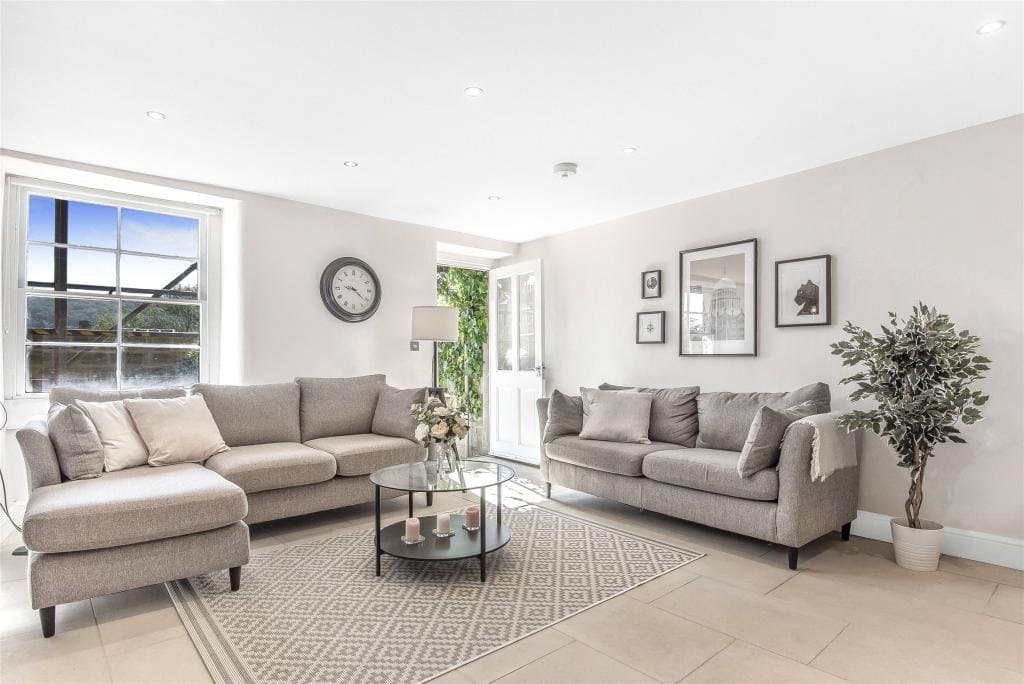 What’s been your biggest lesson?

This isn’t so much a lesson, but more of a mantra I suppose. When you’re renovating a listed building, you have to think long-term. I want this home to be lived in for another 100 years to come.

So you have a social responsibility. I could have cut corners and found easier and cheaper ways to do things, but that’s not what it’s about.

I’ve learnt so much, way more than if I’d studied this. Every last detail is important and every piece of material needs to be natural and as original as possible.

But it’s been great learning about the story of the building. The vault was caked in black when we first got down there, and apparently that’s because it was where the horses used to drop off the coal to fuel the whole house. 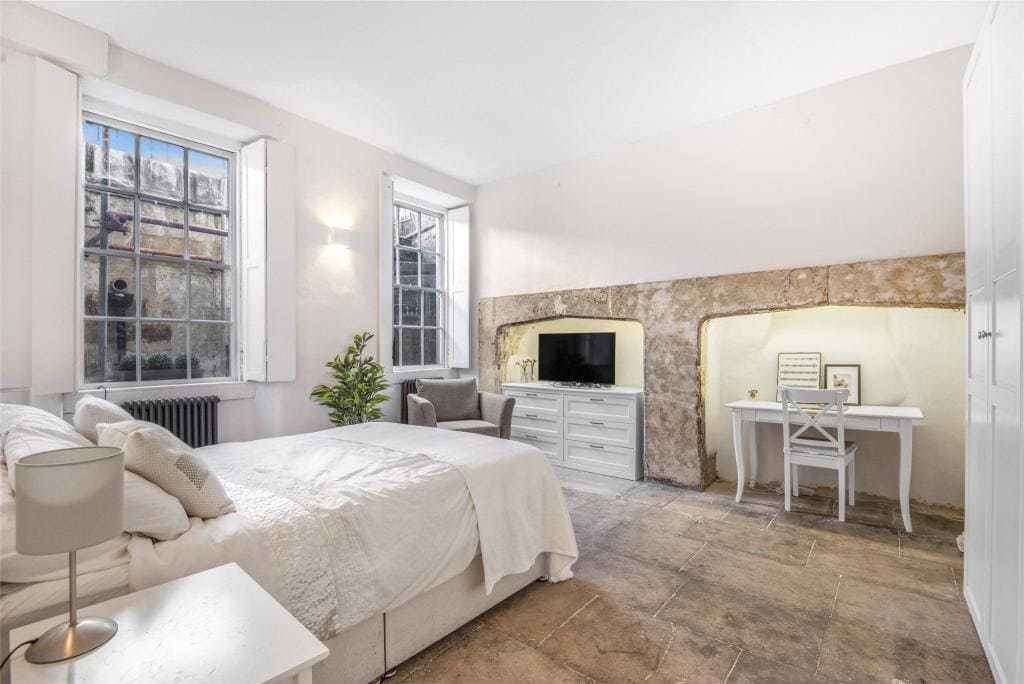 Any advice for people planning their own listed renovation project?

Definitely do it, don’t be afraid. But be cautious and patient. This is not a process where you submit a form and get permission and off you go. More often than not you have no idea what to expect, so do as much research as possible and prepare to deal with whatever comes up. It’s a long process.

Also, make sure you find specialised contractors, because they really know their stuff and they do their job incredibly well.

What are you most proud of?

I’m just happy that I’ve restored a piece of history in Bath, because it probably would have been left for a further 100 years. Knowing it will be used for a very long time is a great feeling.

I went to university in the city and didn’t want to leave, so I’m proud to have contributed in a small way to the city’s history.

We kept so much of the history intact, but have also brought it into the 21st century. It’s got underfloor heating for one thing, and I’m thrilled with the final outcome.

The two-bedroom property is now up for sale on Rightmove for £475,000.

Take a closer look at the property, here: 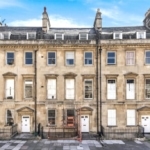 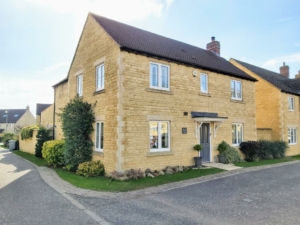 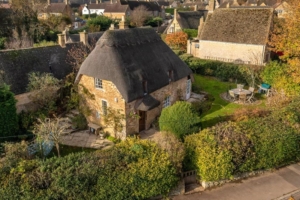 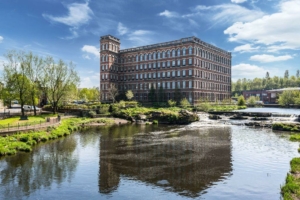