The famed Chapel Cleave Manor is on the market 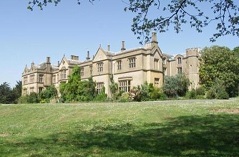 The stunning 17 bedroom, 15th century mansion,
Chapel Cleave Manor, is now up for sale. It dates all the way back to 1455 and its 27,000ft2 walls are bursting with history.


Over the years the manor has been home to Dukes and Lords, the Queen, Celebrities and families, but most recently, it was home to Jeannie Wilkins and her husband Mike. The pair reportedly bought the huge property on a whim at an auction for £360,000 and spent years refurbishing it and found themselves owning the biggest house in West Somerset.


Chapel Cleave Manor recently featured on Channel 4’s property show ‘Country House Rescue’ whereby it was suggested that the house should be opened up to public and host Ghost Tours; this prompted multiple visitors with daredevils paying to have a spooky tour of the manor’s many derelict rooms. So if you like being frightened, head down to the Manor!