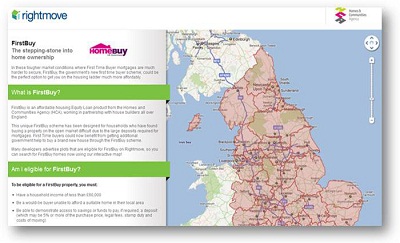 45% of potential first-time buyers state they are now more likely to get on the housing ladder thanks to the Government’s FirstBuy scheme, according to new research from Rightmove.

“FirstBuy was introduced to help more first-time buyers get onto the property ladder, so with nearly half of prospective first-time buyers stating that they are now more likely to buy thanks to the scheme it seems this could be a real boost for many. However, given such a positive response it must be asked whether more can be done to drive awareness amongst the 37% of first-time buyers that did not know it existed. Initiatives like Rightmove’s FirstBuy micro-site, developed in partnership with the HCA, can hopefully extend awareness even further.”


FirstBuy was announced in the Government’s budget in March and launched in September. It allows first-time buyers to purchase a new-build property using just a 5% deposit, with a further 20% deposit provided in the form of a five year interest-free loan jointly funded by the Government and the house builder.


Rightmove published a similar poll in April, a month after the scheme was announced, which found that 37% of first-time buyers felt they were more likely to get on the property ladder under the scheme. A 7% increase six months on is encouraging and indicative of the momentum generated since the scheme’s full launch.

“It has to be remembered that this scheme is limited to 10,500 purchases of new-build only properties. It will therefore not be of interest to those who want an older property or whose less urgent timescales mean they will miss the cut. However, any initiative which helps first-time buyers to get a foot on the property ladder should be welcomed and if the scheme can have the success that our survey suggests then the Government could consider extending the current scheme as well as something similar to assist the wider housing market.”