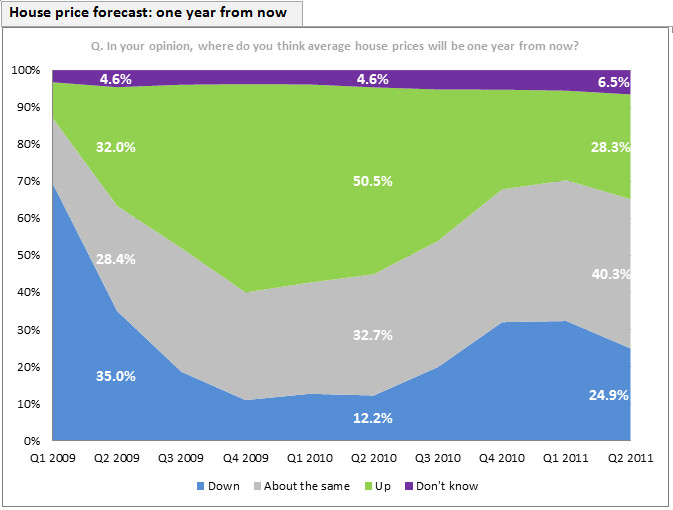 Rightmove’s second Consumer Confidence Survey of 2011 reveals a drop in the proportion of people expecting house prices to fall over the next year. Rightmove surveyed the housing market sentiment of over 26,000 people and has found that the proportion of those expecting prices to fall has fallen from 32.3% to 24.9%. However, a further finding of the survey was that across the UK consumers feel prices in their local area are over-valued and need to come down.

Rightmove director Miles Shipside comments: “Our Q1 survey measured the highest proportion of home movers recorded to date forecasting that prices would be lower in 12 months’ time. That was the position of a third of them then, but now that proportion sharing that view has dropped to a quarter.”

Each quarter for the past two years Rightmove have charted whether the home-moving public believe prices will increase, decrease or stay around the same. For this latest survey the public were also asked whether they believed prices in their area were overvalued, undervalued or about right. The results reveal that just under half (48%) of respondents believe prices in their local area are over-valued, with just 15% of the opinion that they are too low. In London (60.8), the South East (51.7%) and the South West (52.7%) the proportion of those feeling prices were overvalued were in the majority.

Shipside adds: “There is a growing sense that many homes coming onto the UK housing market are priced too high and this is borne out by the views expressed in this survey. We now have a situation where half of the UK public feel house prices are too high, yet three quarters of the same public are expecting prices to either stay the same or increase over the next 12 months. This suggests the prospect of a market stand-off and rising unsold stock levels if sellers don’t wise up to the house price views of their target market.”

Rightmove’s most recent House Price Index found that unsold stock levels saw their biggest jump for four years in April, from 70 to 74 properties per estate agency branch, despite new sellers increasing their asking prices by 1.7% in the same month. This suggests a clear mismatch between seller expectations and what buyers are willing to spend, and this view is further highlighted when local market value opinions are broken down into home-mover categories. Only 34.6% of respondents to Rightmove’s survey who intend to sell a property over the next year felt properties in their area were over-valued, significantly lower than the national average of 48%. Of those intend to buy, 45.8% felt local properties were over-valued and the figure jumps to a huge 66% for first-time buyers.

The proportion of respondents forecasting that prices will remain about the same has grown for the 7th consecutive quarter. They now number 40%, up from 38% the previous quarter and up from the 32% measured a year ago. This trend suggests that prices will level out rather than increase of the next 12 months.

Shipside comments: “The biggest proportion in our survey, 4 out of 10, think we are through the worst and expect a period of price stagnation, rather than rises and falls 12 months out. It’s not exciting for those owner occupiers hoping for their bricks and mortar investment to grow, but a sign of a sense of realism that the roof over your head is a home rather than a wealth play. Individuals circumstances vary and this recession has affected the less wealthy demographic sectors that exist in every region, so sentiments are mixed depending on how hard you have been hit, with some local markets having been really clobbered”.

Reasons for the more optimistic move in the main seem to be a feeling that the economy would be improving (54%), though those in the price pessimism camp felt that deteriorating mortgage availability was becoming a bigger issue, jumping from 12% last survey to 23% this. 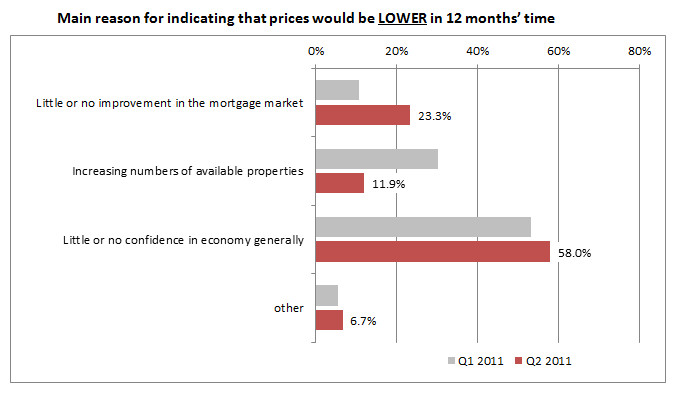 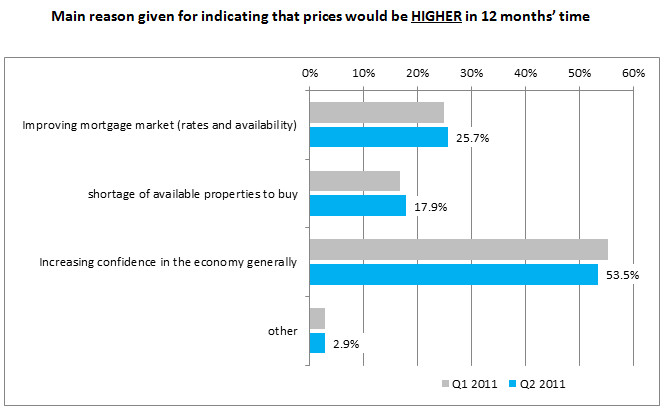