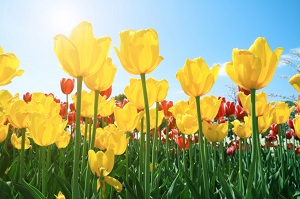 – London up by ‘frothy’ 16.3% and while the capital’s momentum is spreading, the rest of the country is only up by a more modest average of 4.9%, failing to fit the ‘bubble’ narrative

The price of property coming to market this month is up by a national average of nearly £10,000 (+£9,409). This 3.6% rise is the largest ever measured at this time of year and has not been exceeded since April 2002. This pushes the national average to £272,003, a new record high. The market momentum and upwards price pressure continue, and this month have been accelerated by the late Easter condensing the spring home-moving season into the reduced timespan between Easter and the summer holidays. It has been further invigorated by the combination of the Easter and May bank holidays causing a lull in the number of properties coming to market at a time of high demand.


Miles Shipside, Rightmove director and housing market analyst comments:
“May is a traditionally bullish price rise month, though this year’s 3.6% jump beats the previous May high of 3.2% set in 2002. A late Easter in the heart of the house-hunting season has not only concertinaed the traditional hottest home-moving period by several weeks, but also stagnated seller numbers, further stirring up prices in areas of buoyant demand.”


Demand for housing remains strong with email enquiries to agents on Rightmove up by nearly 20% so far in 2014 compared to the same period last year. However, the supply of new properties to market is still unable to keep pace with demand, and whilst earlier months this year saw an encouraging increase in the number of new sellers, this month has seen the number of properties coming to market fall by 1% compared to April, as the bank holidays affect seller activity.


Shipside adds:
“In spite of every region having average new seller asking prices higher than a year ago and it being the peak time of year to attract buyers, the lure of bank holiday breaks meant that fewer sellers marketed their properties this month compared to last. The lack of fresh choice will frustrate buyers and lessen their negotiating power in popular locations as pent-up demand continues to be released and more buyers have the confidence and ability to act after years of inactivity.” 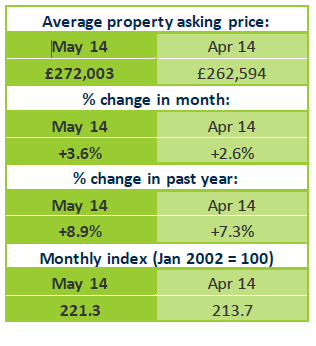 The annual rate of increase is now 8.9%. This is the highest year-on-year rise since October 2007 when it was 10.4%. While housing market momentum is recovering in all regions, it is London that distorts the national picture and erroneously drives the ‘national house price bubble’ headlines. The new seller average asking price of a property in the capital is up by 16.3% (+£82,893) year-on-year compared to an average 4.9% (+£11,028) in the rest of England and Wales.


Shipside observes:
“For a bubble to burst you need a sustained drop in demand, yet agents in the capital report a consistently high level of would-be buyers in markets that are not yet out of reach for Londoners. So while you might describe London’s annual jump of over 16% as being as a result of a very frothy market, it is underpinned by long-term demand and a genuine shortage of housing supply. The northern regions are still below their previous peaks, and while all four southern regions are at all-time highs, the average annual rise outside London remains below 5%.”


The disparity between London and the other regions is further highlighted by the growth in new seller asking prices so far in 2014. The average asking price in London is up by nearly £80,000 so far in 2014, an average of £4,405 per week. The weekly average of the rest of the country is £1,521.


Shipside comments:
“London prices traditionally pick up earlier than the rest of the country, and whilst it appears to be slowly dragging other regions along in its wake, the difference is still very marked, particularly when the percentage increases are turned into hard cash comparisons.”


Indeed, outside London and its commuter belt, demand may be better balanced with supply by the more stringent checks and affordability tests under the Mortgage Market Review (MMR) that became mandatory less than a month ago. The main conclusion at present is that the delays in lenders’ processing systems are curtailing lending, with it being too early to comment whether mainstream buyer activity will have a significant drop-off from the new controls. Where a major imbalance exists between supply and demand, as in London, the long-term solution has to be to create more housing supply to meet any structural need rather than to artificially hold down demand. London has seen the most sought-after locations jump in price as they have become prized by the world’s wealthy, and now level out as supply has increased in this relatively small volume sector. This increase in housing supply is much harder to achieve in the volumes required for the mass London market, where the success of the capital city both as a place to live and a magnet for employment is now resulting in mainstream areas within easy access of the centre seeing massive price increases. Ten out of 32 boroughs have annual rises of over 20%. The 43.1% (+£186,809) annual increase in new seller asking prices in Tower Hamlets is the largest in London and exemplifies the wider problem.


Shipside concludes:
“The MMR is best used as a tool to bring higher standards to lending rather than a blunt instrument to tackle chronic shortages of housing supply in one of the ten regions of England and Wales. The capital now needs a programme of mammoth proportions to create a flood of housing supply. More major transport initiatives, satellite new towns, and the release of building land for both the private and social sectors will help to relieve upwards price pressure and give better options for both its inhabitants and its economic success. Lessening upwards price pressure in London would also temper the ripple effect felt by the rest of the country. While the huge annual gain in Tower Hamlets can partly be explained by a significant increase in cash buyers and investors in Canary Wharf and neighbouring areas driving up the borough average, it is symptomatic of the capital’s wider housing problems. These are very real issues that cannot be ignored and cannot be solved without carefully targeted initiatives and massive investment.”

“A number of areas of Tower Hamlets are investor territory, with a number of cash buyers in the market and accidental landlords who have been sitting on the side-lines since 2008 taking advantage of the buoyant conditions and selling up. Around 65% of the properties we are selling are going to cash buyers, and we haven’t sold a property for under asking price since around August 2013. As an example, one property sold in December 2013 for £425,000 and in March of this year an identical property in the same building sold for £575,000 – a £150,000 difference in just a few months.”

Paul Wilson of Dacre Son & Hartley in Leeds comments:
“People who have been sat renting for the past few years are now turning into motivated buyers, which has led to a shortage in supply, especially in the £250,000 to £350,000 price bracket. All the talk of the rising prices in London and a supposed nationwide bubble has created a wave up the country of vendors raising their expectations, and in some cases putting their property on the market for too high an asking price than is realistic in the market here. Those properties that are put on at sensible prices are moving quickly, so we are advising people they need to be realistic with what they expect to get.”