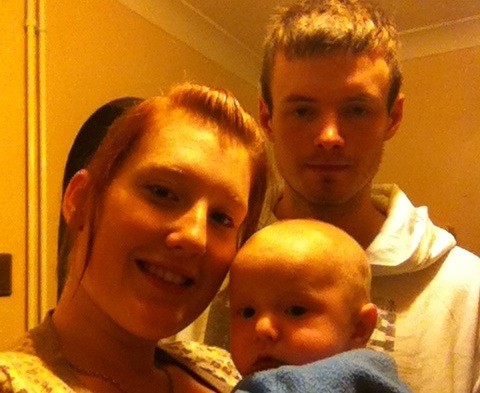 Many property moves are driven by a growing family, but if a new baby is already on the way that can mean a race against the clock to find a new home.

This was the situation Stephen Jones and his partner Bobbie-lee Beverley from Norwich, found themselves in earlier this year. Luckily they just about managed to move in time for the arrival of their newborn, however the trials and tribulations of the property market meant that their purchase completion and baby’s birth all happened within the space of two frantic days in May.


“My partner fell pregnant at the end of last year so we decided to set ourselves up by getting on the property ladder. Initially we looked at shared ownership however we thought they were overpriced and in most cases more expensive then renting, also we realised that there were few houses out there on the shared ownership market. Instead we looked at buying a property outright. We initially lined up a house and informed the seller that we would need to move in quickly due to the expected birth. The seller said he had a house lined up which was not in a chain and therefore we should be able to move quickly. Sadly the seller could not agree a reasonable price for the house he wanted and we had to pull out having wasted a month.


“With the baby due in two months we were looking at privately renting when Kris Pearce, an estate agent at D&G Residential in Norwich, called and alerted us to a house that had come on the market that morning and wasn’t being advertised yet. We viewed it the following day and had an offer completed before the week was done. With only one month left to the due date both parties were pushing the solicitors to complete the sale before the little one came. Due to slow solicitors on the seller’s front over two weeks were lost. Finally we agreed a completion date of 25th May 2012 which was one week before the baby’s due date.


“Finally we could relax and have a week to settle into a house before the baby was due. Or so we thought. Instead the baby had the last word and was born on the 23rd May 2012, TWO days before we completed! This meant that I was rushed off my feet cleaning the house and moving stuff whilst trying to spend as much time in the hospital as possible! Mother and baby were discharged safe and well on the 28th May and able to come back to their new home.”


Stephen, Bobbie and baby Wesley are now looking forward to celebrating their first Christmas together in their new home in Bowthorpe, Norwich.