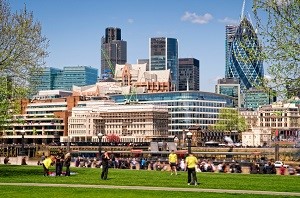 The prices of property coming to market in London are up by 2.1% (+£11,217) this month, to a new all-time high. While the price surge in the capital continues, it is no longer being driven by the prime London boroughs. In spite of the four most expensive boroughs recording an average fall of 1.3% this month, London overall is still up by 2.1% on the month as price rises continue to ripple out. The average price of property coming to the market in London is now £552,530. This new record is up 1.5% (+£8,298) on the previous high achieved in October 2013.

“Another new record for the price of property coming to market in the capital will probably come as no surprise. However, what might surprise some people is that the last peak was achieved as long ago as October last year. Demand continues to outstrip supply in many areas and with the spring market approaching, further record highs are to be expected. Buyers seeking better value are pushing up demand and consequently prices in more affordable areas, causing a wave of new price peaks in areas before rolling on to the next cheaper location.”

The four most expensive boroughs, all with average new seller asking prices over £1 million, saw an average month-on-month fall of 1.3%. Westminster dropped by 2.3%, Kensington and Chelsea by 2.4%, Camden by 1.4%, with the only borough holding steady being Hammersmith and Fulham with a marginal rise of 0.8%.

“The slack caused by prime London’s slowdown has been taken up by London boroughs further out. While the top-end locations remain sought after and highly valued, the slow-down in the pace of their rises was bound to happen after some very heady increases.”


Increasing prices are luring more sellers back into the market as well, with a 10% year-on-year increase in the number of properties coming onto estate agents’ books. This appears to be a definite recovery in property supply to help meet buyer demand as more sellers are enticed to market.  The current weekly run-rate of 4,494 newly advertised properties compares with 4,087 in the same period last year.

“There is a definite spring seller upturn which is great news for buyers who have been starved of fresh stock in popular locations. While the greater choice available to buyers will mitigate some of the upwards price pressure that many sellers have been able to exert, structural shortages remain in the housing supply in London.”


With the Budget due on the 19th of March, the booming London housing market could be a target for the Chancellor’s attention. There are some in the coalition who warn that Help to Buy is now too much of a stimulus, so could a reduction in the upper limit from £600,000 to say £400,000 be a possibility?

“While Help to Buy is little used by purchasers at the upper price limits, it may be seen as a prudent anti-overheating message if the top limit of £600,000 is substantially reduced. It would be a mainly symbolic gesture however, as most people buying in London with a mortgage are stumping up deposits considerably greater than the 5% that the Help to Buy initiative is designed to promote.”