The first ever Rightmove Hack-a-thon 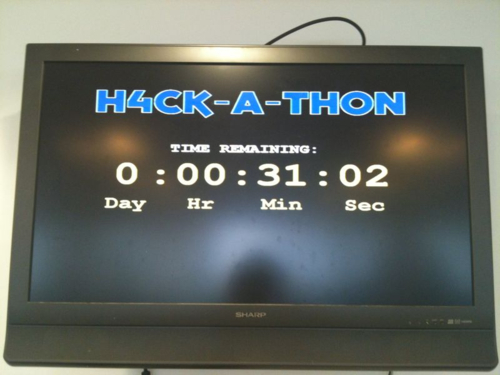 Last month our product development teams took part in what shall forever be known as the “First Annual Rightmove Hack-a-thon”.

What is a ‘Hack-a-thon’ you ask? Well you’d better keep reading…..

It’s half past five on a weekday afternoon. The chances are that some of you are gone before the chime of the half hour is over, leaving simply a couple of smouldering tracks where you once were seated, your car already half way towards the exit in the car park. To some, this is known as ‘home-time’.


This isn’t the case in our London office, where members of our development team can often be found working away long after Ian Beale has committed yet another heinously immoral act and the Eastenders’ ending credits roll up the screen.


Before we go any further, we should probably point out that this is not because they are chained to their desks until the time that we think they deserve to go home, or indeed confiscate their hobnobs because someone broke Rightmoveplus just before home-time. No. Believe it or not, they stay late because they want to.


As well as bags of enthusiasm, ideas are something else that we’re not short of here at Rightmove. However like most things in life, it is simply not feasible to transform every idea into a reality, instead forcing us to prioritise and unfortunately discard those not deemed as being important enough at the current time.


And so it was on one warmer-than-average evening in March, the idea of the Hack-a-thon was born!

Challenge 1: What do we make and with whom?

Everyone was invited to submit ideas for the Hack-a-thon, with the ‘idea creator’ then pitching this idea to the group as a whole, with the aim of recruiting team collaborators.

Whittled down from 50 initial ideas, 9 project teams were created working on the following ideas:

–          Ability to search by walking distance to location


At 2pm on Wednesday 18th May the Hack-a-thon klaxon sounded and the 48 hour madness began! Yes that’s correct; the teams had just 48 hours to make each of their ideas a reality! 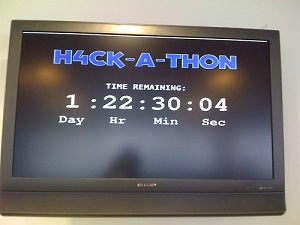 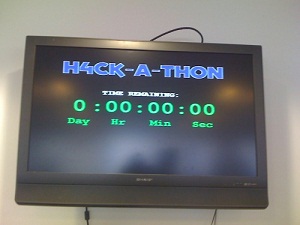 Armed with their exclusive Hack-a-thon t-shirts (soon to be found listed on Ebay at sky-high prices, no doubt), a newly fixed coffee machine and in some cases pyjamas, the teams were ready to do battle!


Strolling in to the office the following morning, and the pressure was starting to take its toll, with rumours circulating that one team had stayed in the office till 1am. Were they mad? No. They just wanted to win!


30 hours into the Hack-a-thon and competition was beginning to get fierce. Word reached the floor below that Team A had stolen Team D’s secret supply of energy boosting Jaffa Cakes, prompting management to step in and supply an emergency selection of pizza and beer. “We must keep the order somehow” they were heard whispering.


It’s Friday and the final stretch of the Hack-a-thon. Luckily, after a quick headcount, we realise we still have everyone with us. “No casualties, thank goodness”, we are told by a relieved member of Human Resources.


With only 5 minutes to go the office was silent. Well silent apart from a certain team’s questionable playlist and the irrepressible striking of keyboards, mice and occasionally, heads.


As much as everyone deserved to be a winner at the end of the Hack-a-thon, there were just three winning teams picked, judged on the technical aspects of the finished product, the ‘coolness’ of the project and how they worked together as a team.

4. Ease of use and design

5. Implementation potential – “does it have legs?”


To learn more about these teams and their work, simply sit back, relax and watch the film.

If you’d like to have a better understanding of each project, visit their Hack-a-thon team blogs, where you will find a variety of information charting their progress over the 48 hours.

These boots are made for walking