“You’re supposed to be at home!” 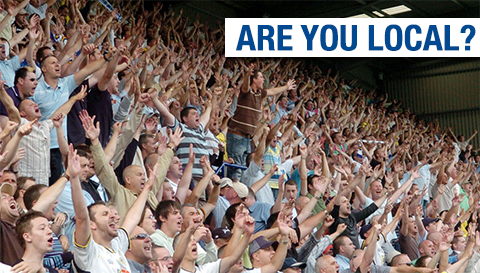 Rightmove surveyed over 13,000 football fans from around the country, including 9,351 fans of Premiership clubs, and recorded the team they support and their full postcode to establish the average distance each fan lives from their club, and what proportion of each club’s fans are local to their home stadium.

As you might expect, the proportion of fans living within the same postcode as their team’s stadium is significantly higher within one-team towns. Wigan’s lead at the top could also be explained by the fact that there is a high concentration of historically successful Premiership clubs based nearby in the North West, meaning any football fans living outside of a Wigan postcode are likely to have had their heads turned by another club.


Generally, the more historically successful a club is the more likely it will be to have a lower proportion of ‘local’ fans, as success over time breeds a more national rather than local fan base. Wigan, Norwich and Southampton occupy the top 3 positions in Rightmove’s local fans league table, with Manchester United, Liverpool and Chelsea in the relegation places, but these positions could easily be turned on their head in the final Premiership league table at the end of the season. It’s interesting to also consider that whereas most clubs were initially set up to serve their local community, can success be achieved and sustained in the modern era without a large proportion of non-local support?

“Our study shows that when a Premiership club plays at home, that isn’t always the case for its fans. As major clubs like Manchester United have grown their national – and even international – fan base, the overall proportion of their fans living within the same postcode as the team’s home stadium has decreased. With the likes of Manchester United and Liverpool at one end of the table and Wigan at the other, there certainly seems to be a correlation between historic success and placing in the Local Fans League Table. Although at least this means that the majority of Wigan fans can get quickly back to the comfort of their own homes on a Saturday afternoon when results at the DW haven’t gone their way.”


Rightmove also broke down the data by city to reveal the level of support for Premiership clubs in the UK’s hotbeds of football. In Manchester, although just 9% of Manchester United’s fans live in the same postcode district as Old Trafford, the sheer scale of their support means that more than half of football fans in the city support United overall. In Liverpool, around two thirds of fans were found to support Liverpool with one in four supporting Everton. Despite the footballing rivalry between the two cities, and in particular between Manchester United and Liverpool, there were levels of support for opposing clubs in both locations, with 5% of football fans in Manchester supporting Liverpool and 4% of fans in Liverpool supporting either Man Utd or Man City.


In London, Arsenal are the most well-supported club ahead of rivals Tottenham Hotspur. Surprisingly, Manchester United and Liverpool both appear in the top 5 most-supported London clubs ahead of Premiership teams who are based in London such as Fulham, Queens Park Rangers and West Ham United.

To embed this infographic on your site, copy and paste the following code: