Thinking of transferring your Pension into property? 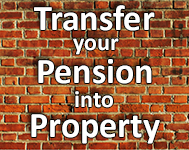 Thinking of transferring your Pension into property?

Then meet Frank, he, like most of us did not understand his pension, but did understand property. And after only a little reading he discovered he could develop a better use of his pension, and that’s what he did.

Frank Joyce, 52, had 3 different work pensions from a variety of jobs as an IT consultant, he wasn’t entirely sure where they were invested or how they were performing. He took matters into his own hands, wanting to better understand his pension and what property had to offer. In this account we recall how Frank changed his attitude towards his pension and is now reaping the benefits. We outline his aims and how he has now reached his goals. 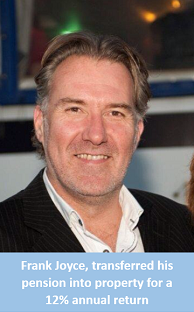 What was Frank’s situation?

Until 2013 he had paid into a pension. The pension provider Friends Life projected, in a traditional stocks and shares fund based investment that Frank would receive only 5% growth on his money for the coming years ahead. He was unhappy with this projection; at retirement he would not have the capital he required. He believed his pension could provide him with a higher return.

Above all else Frank wanted to consolidate, control and simplify his pension.

He had several other requirements:

Consolidate
Frank was provided with a free Pension Report to clarify. The report explained the past performances and the charges he was currently incurring.

Control
In the next step he was able to combine his pensions into a single pot and decipher. He decided to move his pension into a Self Invested Personal Pension (SIPP) to ensure he could take control of his investment choice, he opted to get some help to do this, but he could have even done it on the internet for free to cut out financial advisor fees.

Frank was offered a variety of property based pension investments including purpose built student accommodation, hotels and care homes. It was his decision to make and he completed his own due diligence. Frank decided to engage in a UK property development investment that has earned him 12 % on his money for a 1 year investment. He understood exactly how his money was working for him, could plan for the future with fixed returns and best of all he could see the physical results in the property investment.

Safe return
In October 2014, he received 12% on his money, and the full amount of capital was returned safely to him. He achieved his objectives of fixed returns, security and getting his monies returned to him on time. Frank is now planning on a second term of investment in property.

Take an active role in your pension and switch to property, many people find this is a simple, prosperous and rewarding process, this could be the future of pensions.

John Charles Property Investments has been a Premier Partner of Rightmove for over 2 years and regularly provide comment on the property and pension market. We are experts in this field and have helped many clients access property investments with their pension here in the UK and often abroad.