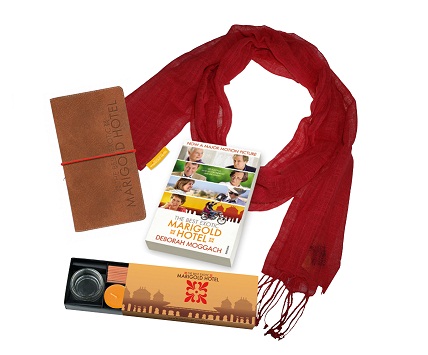 To celebrate the release of The Best Exotic Hotel, which hits cinemas on 24th February we are offering one lucky winner (plus a friend) the chance to join the all-star British cast on the red carpet at the film’s world premiere in London on Tuesday, 7th February,along with a goody bag.

Four runners up will also win goody bags which include a pashmina, scented candle, travel journal and wallet and a copy of the Deborah Moggach book on which the film is based.

A bit about the film:

For a disparate group of English pensioners (Judi Dench, Bill Nighy, Maggie Smith, Tom Wilkinson, Penelope Wilton, Celia Imrie and Ronald Pickup), retirement takes an unconventional turn when they abandon their homeland, enticed by advertisements for THE BEST EXOTIC MARIGOLD HOTEL, a seemingly luxurious sanctuary for “the elderly and beautiful” in Jaipur, India.  On arrival, they discover that the hotel falls somewhat short of the romantic idyll promised in the brochure, but they are gradually won over by the ever-optimistic young manager Sonny (Dev Patel), and tentatively embark on a new adventure, finding that life can begin again when you let go of the past.

In honour of ‘The Best Exotic Marigold Hotel’ we had a look on Rightmove Overseas and found these exotic properties in India: