When Rightmove asked me to write a blog about the new TV show ‘Marbella Mansions’ I jumped at the chance.  I used to live on the Costa del Sol, so I already have an insight into the way of life of normal folk.  Marbella Mansions gives us an insight into the lifestyle of the super-rich by following British estate agents, interior designers and developers working in the luxurious property industry.

I have been lucky enough to speak to one of the programme’s stars Jonty, from Richard Lewis Interiors who is well known on the coast for his outrageous and colourful interiors.  Jonty’s business is based in Guadalmina; I used to work in this same commercial centre where his business is located, Jonty informs me that this is now one of the most established and exclusive areas of the costa.

Looking at the properties on the market in that area I can understand his view.

“My parents had a villa in Sotogrande, when mum and dad retired they moved over here.  I jumped at the chance of coming over, but I also had a great job in the UK, interior designing for show homes all across the North West for a number of different developers, so was kind of reluctant to give it up…… When I came over and saw the way everyone lived, I thought ‘I have to be here!”

Jonty tells me he initially worked in a beach bar and absolutely loved it.  Whilst there he learnt Spanish and someone he met learned that he was an interior designer, offering him a job on the spot, he worked for them for a year or so and then started on his own.

Talking to Jonty I get the sense that he loved making the programme; he tells me “everything always happens to me, anything that could go wrong or anything funny that could happen, just happens to me”. He tells me of a funny story about chasing curtain rings down San Pedro main street, I can’t wait to see this.

San Pedro is a beautiful town just west of Puerto Banus and was one of my favourite haunts.  When I arrived my first night on the coast was spent wandering San Pedro looking for somewhere to eat, a small café welcomed me in and made me feel at home.  I never forgot their kindness and visited them on a regular basis.

I was curious to know whether the exclusive areas had changed since I lived there nearly 9 years ago.

“Most exclusive, I would say Guadalmina Baja it’s featured heavily in the programme.  I would also say El Madroñal and La Zagaleta”.

Now La Zageleta was known as the pinnacle of luxury on the coast and I once got access to the gated community and drove round the streets in awe.  La Zagaleta offers two 18-hole private golf courses, a riding club, tennis, natural wildlife and luxurious facilities. Surrounded by almost 900 hectares of own nature reserve and stunning views of the Mediterranean.

So has the state of the Spanish economy affected his business? “To be honest the past four years have been quite difficult for everyone I think.  A lot of companies have suffered because of the recession.  But I think it’s a good thing property prices have come down, more people can now afford to buy. And furnish it!”.  Having lived on the coast in the property boom, I know first-hand the difficulty of being able to afford a home during this time.

I was keen to know about a project that is showcased in the programme, I heard they had built a doghouse!

“The clients have three Chihuahuas and the husband was getting annoyed as their beautiful sofa was getting bitten to bits so we decided to build a dog house in the garden hoping they would move in there.  The interior was amazing I used Osborne & Little wallpaper, the client’s antique chandelier- a family heirloom, and it was on two levels with a staircase!  The dogs now have a wonderful home (which incidently they don’t use!) with its own landscaped garden and white picket fence- only in Marbella”.

What is the most outrageous thing you have ever designed?

“One of the most outrageous things I’ve done, on the show I was doing a client’s house and it was all terracotta on the outside and all the doors and windows were dark wood so I decided to paint them lime green.  I think all the neighbours were thinking ‘oh my god what on earth is he doing now?’ the first time the client saw it they thought ‘oh no what’s he done?’, but now they absolutely love it”.

Talking to Jonty you can feel his overwhelming passion for the Marbella lifestyle.  “I think people imagine that I am sat on a beach but I live quite a down to earth lifestyle, I love Spanish restaurants and culture.  I enjoy a very cultured lifestyle, I just enjoy every minute and meeting new people and that’s what its all about here”.

Jonty is such good fun that before we know it we have been on the phone for nearly 40 minutes.  Although to some, the properties will be the main draw of the programme, from the tales he has told me I think Jonty will certainly be the star.

Marbella Mansions’ hits our screens weeknights at 10pm on Home (Sky 246/Virgin 265) from Monday 10th September for what is set to be a surprising, sexy and inspiring series. 4 of the 10 episodes are dedicated to Jonty Richard Lewis, the well-known Marbella designer – www.richardlewisinteriors.com 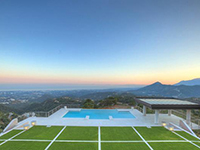 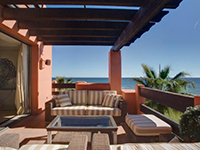