Dartford in Kent has become the fastest place to sell a property across Great Britain, new data from the UK’s number one property website Rightmove reveals today.

While nationally the average time to sell a property has dropped by eight days from 87 to 79 days, in Dartford homes are taking just 16 days to secure a buyer on Rightmove. This is down from the average of 49 days it took to sell a place in Dartford in January 2015.

The top ten fastest selling hotspots outside London are dominated by the London commuter counties of Kent, Essex, and Hertfordshire, with the majority seeing associated annual increases of over 10% in the price of property coming to market.

Asking prices in Dartford have jumped by 17% in the past year, and the average 16 days is nine days quicker than anywhere else around Great Britain. Grays in Essex comes in second at 26 days, half the time it took at this time last year (52 days).

Bristol, the most searched for place on Rightmove in January, makes an appearance at number seven, with properties selling in an average of 31 days, down from 47 days in January 2015.

The average time it takes to sell a property in Scotland is down from 97 days to 87 days in the past year, and in Wales it has gone down from 108 days to 97 days.

The data includes all properties that were changed to Sold Subject to Contract (SSTC) by agents during January 2015, and measures the interval of time since they were first listed for sale on Rightmove.

Up and coming areas

It’s not just the Southern commuter areas where sales are speeding up. The northern towns of Warrington, Crewe, Middlesbrough and Bury have all cut their selling time by 30 days or more, putting them all in the top ten areas where sales have sped up most.  The biggest up and coming difference is in Clacton-on-Sea where homes are now selling 45 days quicker than this time last year, down from 95 days to 50.

At the slower end of the market properties are taking over 100 days to sell, with Darlington named as the slowest place taking an average of 132 days to find a buyer. St Helens comes in second slowest at 128 days, followed by Wakefield (120 days) and Bradford (119 days).

“This analysis mirrors what agents have been telling us for the past few months, that properties in the right area and on Rightmove at the right price are in high demand and selling really quickly.  Homes in Dartford selling in just over two weeks shows just how in-demand the places within easy commuting distance to London have become over the past year.  The average asking price of a property in Dartford is under £300,000, so it’s not hard to see why it’s so sought after compared to average prices being more than double that in London.

“Further out from the capital it seems that Bristol could be becoming the new Cambridge, which was the quickest place to sell a property two years ago. However, in the slower market areas it’s even more important for sellers to work with their local agent and agree a realistic asking price so they have more chance of securing a buyer to speed up their own move to their next home.”

“Properties are going extremely quickly in Dartford, to the extent that around 90% of those that we have for sale are selling within the first 7-10 days of signing our contract. Traditionally in the past the majority of buyers were people moving within Dartford, now there are a lot more people moving from London as well as investors. There’s a handy commute to London which will get even quicker when nearby Abbey Wood Crossrail Station opens up, not to mention good links to the A2 and M25, some outstanding Ofsted rated primary and secondary schools, and prices are more affordable than London. In the past twelve months sales have been very strong and we’ve had a very busy start to the year so this looks set to continue in 2016.”

“As London prices continue to rise many people make the conscious choice to add to their commute rather than their mortgage, making areas like Clacton-on-Sea which has a direct train service to London’s Liverpool Street a popular place for buyers. In particular we have seen increased demand for three and four-bedroom family homes in this area as families look to gain more space for their budget in an area which offers some excellent schools. Crawley is equally an area we are not surprised to see on the list of fastest places to sell as it’s a location fuelled by big businesses and major employers, therefore flats and small houses are in increasing demand. We have sold a number of properties in this area recently in under a week whilst still achieving on average 98% or more of the asking price.” 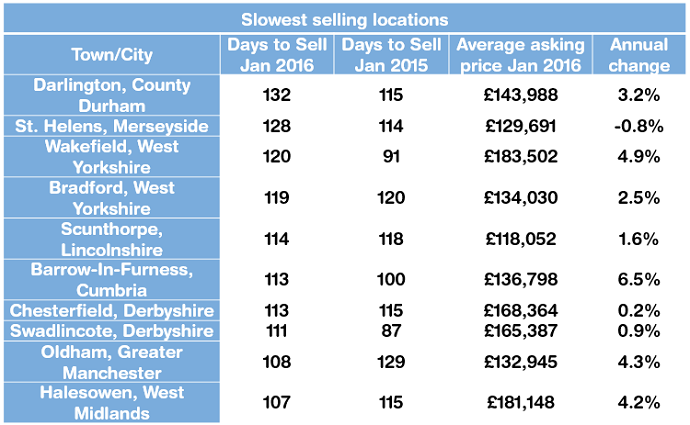