Price record for larger homes as buyers compete for space

The trend of up-sizing to a larger home has continued at pace over the past month, leading to record asking prices in the second-stepper sector, made up of three- or four-bedroom homes. This price record has been fuelled by buyers looking for more space, including both those who need extra space for their families and those looking for room to work from home. Overall prices have remained steady since they hit a record in July, up by a marginal 0.2% on the month, and up by 5.0% annually, which is the highest annual growth rate recorded since September 2016. Regions outside the South of England have seen the strongest price jumps, with Yorkshire & the Humber, East Midlands, West Midlands, North East, North West and Scotland all at new records.

Tim Bannister, Rightmove’s Director of Property Data comments: “Increased competition for second-stepper homes has pushed prices to a record this month for those looking to take the next step up the ladder. Needing more space has always been the most popular reason for moving house, but now there’s a new urgency for extra space to be able to work from home, which means that there are different sets of buyers competing for the same type of property. At the start of the year a fourth bedroom was very much a luxury for buyers trading up, but it’s now emerging as a must-have for those who are able to take that step. With overall asking prices just a few hundred pounds shy of July’s record, and buyer demand at an all-time high, those currently looking for their next home are likely to find that only offers close to the asking price will be considered, especially for larger homes.”

The demand for larger homes is also reflected in the number of sales being agreed by agents compared to this time last year. The strongest sector is ’top of the ladder’, which includes four-bedroom detached homes and larger. Sales agreed, compared with the same period last year, more than doubled in August in this sector, up by 104%. While in the second-stepper sector (three- or four-bedroom homes excluding four-bedroom detached) they were up by 55%. The first-time-buyer sector of two bedrooms or fewer, although not as strong as the larger homes sectors, still saw sales agreed up by 36%.

Nationally, sales agreed for the whole year to date are now down by only 5% on the same period last year. Two regions – the East of England (+4%) and the South East (+1%) – have already overtaken the number of sales agreed for the same period last year, helped by higher average prices causing the stamp duty holiday to have more of an impact for buyers and sellers in these areas. Unsurprisingly both Scotland and Wales are in double digit declines as they are still playing catch up from reopening their housing markets later than England, and are now down by 21% and 16% respectively.

In London, sales agreed for the year to date are down by just 3%, with a two-speed market in play. There is strong sales activity in Outer London, especially for top-of-the-ladder homes, while areas like Zone 1 are finding it more challenging, where sales are down by 14% for the whole year to date compared to the same period last year. The strong activity in Outer London has helped the capital to climb back to being the second fastest region for the average time taken to secure a buyer, now being beaten only by Scotland at 35 days. The average number of days to agree a sale in London is now 49, a significant 20 days shorter than at this time last year. Nationally, the average time to secure a buyer has dropped from 62 days in August 2019 to 53 this August.

Bannister observes: “When comparing with last year, it’s remarkable that two regions have already caught up with and overtaken the number of sales agreed across the year so far, and if the market continues at its current pace then we could see all areas of England break even over the next month or so. We know that some people are now choosing to move out of London altogether, but these latest figures show that there’s still plenty of activity in the outer areas of the capital. The market remains challenging in Zone 1, as the benefit of living within walking distance of an office in the City has dropped down buyers’ wishlists for now.”

Rightmove’s analysis estimates that there are nearly 40% more sales currently on the journey from agreeing a price towards completing the sale compared to this time last year, leading to agents reporting that they are having to manage expectations with clients and explain to them that their sales are going to take a bit longer to complete.

Bannister explains: “We’re hearing of challenges at all steps of the buying and selling process, including lenders having to deal with a higher number of mortgage applications and solicitors over their capacity, and we estimate there are nearly 40% more sales currently going through than at this time last year. The temporary stamp duty holiday means that there’s more urgency than usual for the congestion to be cleared by the end of March, making it vital for buyers and sellers to work closely with their estate agent and to make sure that they’re moving fast when the ball is in their court to complete a document or answer questions. We’d advise that buyers and sellers factor in at least an extra month to account for the current delays in the process, if possible, as time is already running short for sales that are agreed now to be completed by Christmas.”

Ben Hudson, Managing Director of Hudson Moody in York, says: “In the first few months of the market reopening I was saying that we were as busy as we’d ever been, but even that is now paling into insignificance when compared with how busy we are right now. A number of our buyers are coming from London, as it’s comparatively cheap here compared to the capital. They’re selling up their homes in Wandsworth and Clapham and buying a four-bed detached house in York, because they’ll only be commuting from here once or twice a week, something they would never have been able to consider doing before. We’re very much having to make our buyers and sellers aware that the conveyancing process is taking longer at the minute; there’s a mixture of fewer council staff working so searches are taking longer, mortgages taking longer to go through, and solicitors being inundated with work. We’re having to call everyone involved in the sale constantly to make sure things keep moving.”

Nick Leeming, Chairman of Jackson-Stops, comments: “When the property market experiences unprecedented demand, such as the UK has seen post-lockdown, you can understand how potential logjams can form throughout the transaction process. For those looking to sell their home now, there are ways in which you can help prevent a sale from taking longer than expected to reach the completion stage. A key way of doing this is to be prepared, get all of your documents, searches, pre contract enquiries and contracts agreed in advance, so that as soon as you have agreed terms with a buyer everything you need is ready. It is also worth investigating the delivery time scales of your solicitor – do your research, read reviews from other sellers. The last thing any seller wants is to wait for two weeks for a solicitor to reply to an introductory email so it is worth looking into the availability of online conveyancers if time is of the essence.” 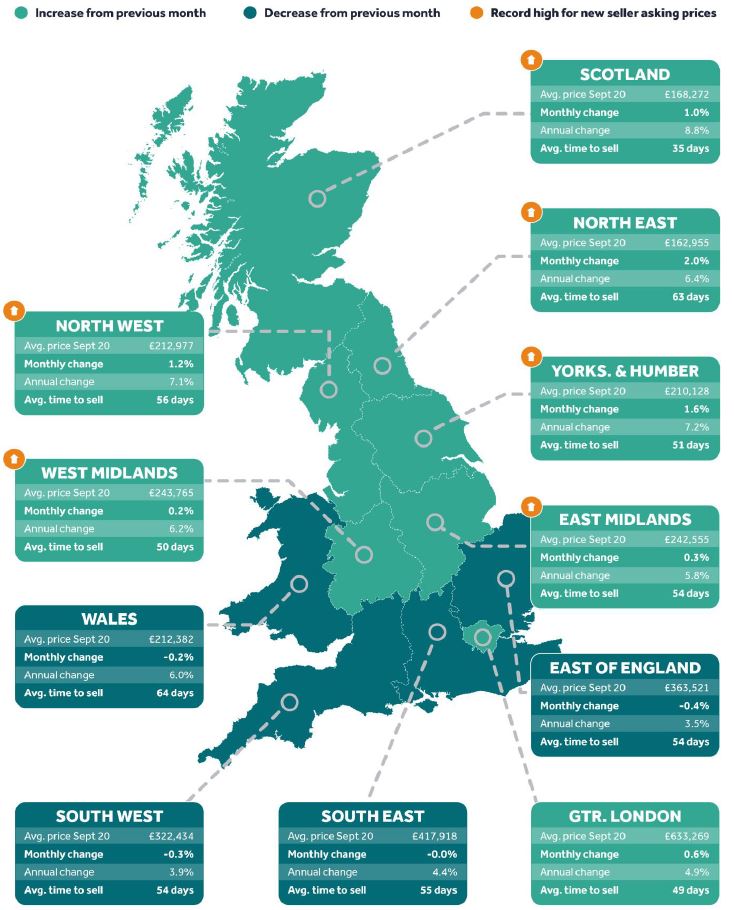 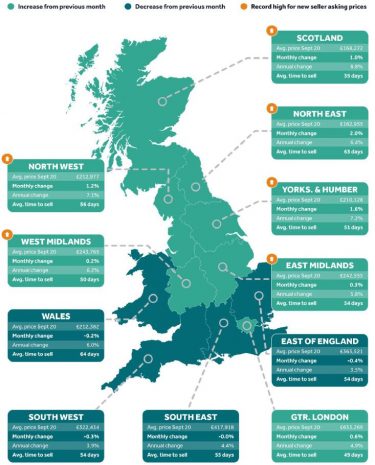 The House Price Index is the largest, most up-to-date monthly sample of residential property asking prices. The index monitors changes in house prices both annually and monthly, providing a comprehensive view on the current state of the property market in England, Scotland and Wales.

Based on circa 95% of newly marketed property, the Rightmove House Price Index is the leading indicator of residential property prices in England, Scotland and Wales.