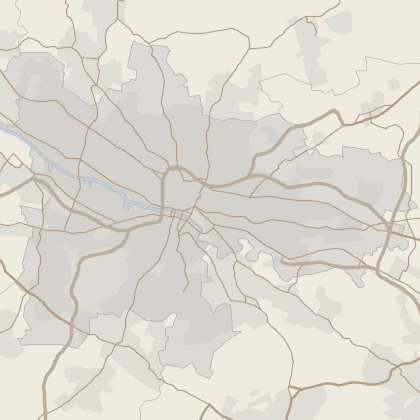 Glasgow's city centre is bounded by the High Street to the east, the River Clyde to the south and the M8 motorway to the west and north which was built through the Townhead, Charing Cross, Cowcaddens and Anderston areas in the 1960s.

The heart of the city is George Square, site of many of Glasgow's public statues and the elaborate Victorian Glasgow City Chambers, headquarters of Glasgow City Council. To the south and west are the shopping precincts of Argyle Street, Sauchiehall Street and Buchanan Street, the latter featuring more upmarket retailers and winner of the Academy of Urbanism 'Great Street Award' 2008.

The main shopping centres are Buchanan Galleries and the St. Enoch Centre, with the up-market Princes Square and the Italian Centre specialising in designer labels. Glasgow's retail portfolio forms the UK's second largest and most economically important retail sector after Central London.

The city centre is home to most of Glasgow's main cultural venues: The Theatre Royal (home of Scottish Opera and formerly Scottish Ballet (which now resides in the Tramway theatre)), The Pavilion Theatre, The King's Theatre, Glasgow Royal Concert Hall, Glasgow Film Theatre, Gallery of Modern Art (GoMA), Mitchell Library and Theatre, the Centre for Contemporary Arts, McLellan Galleries and The Lighthouse Museum of Architecture. The world's tallest cinema, the eighteen-screen Cineworld is situated on Renfrew Street. The city centre is also home to four of Glasgow's higher education institutions: The University of Strathclyde, The Royal Scottish Academy of Music and Drama, Glasgow School of Art and Glasgow Caledonian University.

Property for sale in Glasgow

Take a look at our current list of property for sale in Glasgow. Rightmove.co.uk lists over one million flats and houses to buy or to rent across London and the UK. We update our listings continuously. You may also want to see houses and flats in other areas of Scotland, including East Renfrewshire, North Lanarkshire, Renfrewshire, East Dunbartonshire, West Dunbartonshire and Inverclyde.