View all properties for sale from Austin Chambers, London 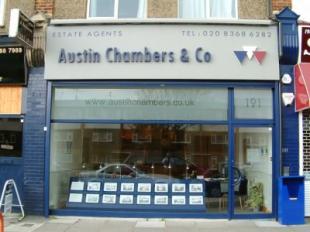 Austin Chambers was established in 1977 by Irving Singer who set up a sales, lettings and commercial management agency.

We originally traded from a small hut near High Barnet underground station and in 1981 we moved to larger premises in Woodhouse Road, Friern Barnet.

Richard Klein joined the company in 1985. He assisted in expanding and developing the sales department, giving Irving the chance to expand the management business.
In 1990 the company formed an amalgamation with a West End company, therefore having an associate office in Oxford Street. This enabled us to expand the commercial management department even further, boasting properties all around the country including Norwich, Oxford, Cambridge and Brighton. We also manage many commercial buildings both in the city and west end of London.

As the company grew in size, the need for larger offices became paramount and so in 2002 we moved again to the larger premises next door.

In 2007, Ali Khani joined the company and took over what was then a relatively small lettings department. He has now expanded this department greatly, acting for some one hundred and fifty landlords and the department is growing year by year.

The company, being members of both the Property Ombudsman and the National Association of Estate Agents, has thrived from year to year due to its personal service, local knowledge, numerous recommendations and return business. Offering an unrivaled wealth of experience and local knowledge our staff have over sixty years of expertise in the property industry. Successfully selling and letting for over thirty years we have survived two major recessions and continue to move forward from strength to strength.

Disclaimer: The information about this Agent is provided by the Agent themselves as an advertisement for their agency services. Rightmove is not endorsing this Agent and makes no warranty as to the accuracy or completeness of the advertisement or any linked or associated information, and Rightmove does not check or verify the accuracy of the content. The information is generated, provided and maintained by Austin Chambers, London. Please contact the Agent directly to obtain further information about their property services.

Fax: 02083 618657
Email agent
This site: Site mapHelpCookiesSafety and securityTerms of UsePrivacy Policy
Major cities and towns in the UK: