View all properties for sale from Hoopers, Neasden 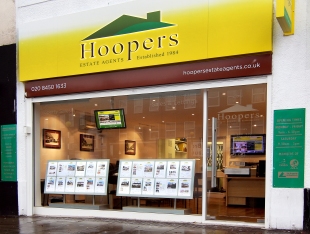 Hoopers was conceived in 1983 by the late Frederick M Hooper (FSVA) and John Hooper (FNAEA). Our first office was opened in April 1984 at Neasden Lane North. Within 4 years we had expanded to a second office at Kenton Road and 3 years later we opened our third office in Neasden shopping centre. Prior to establishing Hoopers in 1984, Frederick Hooper had successfully run and owned Hooper & Co at 12 High Road, Willesden Green in the 1960s and was a partner in Hoopers at Neasden until his death in January 1989. Since then the practice has been run by John Hooper with the assistance of his able team of sales and lettings negotiators and administration staff.

Disclaimer: The information about this Agent is provided by the Agent themselves as an advertisement for their agency services. Rightmove is not endorsing this Agent and makes no warranty as to the accuracy or completeness of the advertisement or any linked or associated information, and Rightmove does not check or verify the accuracy of the content. The information is generated, provided and maintained by Hoopers, Neasden. Please contact the Agent directly to obtain further information about their property services.

Fax: 020 8452 0742
Email agent
This site: Site mapHelpCookiesSafety and securityTerms of UsePrivacy Policy
Major cities and towns in the UK: