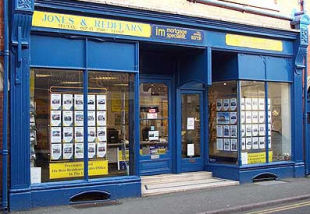 THE STORY OF JONES & REDFEARN


The firm of Jones & Redfearn is a continuation of two long established firms that amalgamated in October 1996. These two firms were Messrs. Wesley Haslam Estate Agents and Messrs. Eastlands Surveyors & Estate Agents, both of whom were highly regarded, locally based practices.


Wesley Haslam was founded in the 19 century in Queen Victorias 41st year in 1878, by Messrs. William Hall and T.C. Amos who were succeeded in 1902 by Mr. Hubert Holbeche. Health problems led to Mr. Holbech selling his firm to Mr. Charles Wesley Haslam who practised from the Town Hall Chambers. Based around auctioneering, Mr Haslam built up a successful business selling real property and chattels. In 1928 he moved the business to Number 70 High Street and due to expansion, relocated in 1951 to the offices and sale rooms at St Helens Place. Further expansion led to 3 further offices and the taking on of new Partners, including Mr. Frank Redfearn in 1961, his son Nick and Partner, David in the new firm.


The firm is proud to be the descendent of Wesley Haslam and its tradition, which is over 125 years old.


The firm of Eastlands was developed out of the local firm of Richard Pearce & Co. that was established in 1951. This firm was based around residential estate agency and the running of the local livestock market for the farming community. The firm expanded to have offices all along the North Wales Coast and was joined in 1967 by Mr. Wilfred Eastland who started Eastlands. The firm developed into commercial property matters and when Mr. Eastlands son, John took over in 1983, its livestock side was sold off and residential and commercial became its specialisms. Based in its High Street premises since May 1978, the firm expanded and was joined by David Jones on his graduation from what is now John Moores University, in 1984. Sadly, in 1990 John Eastland passed away and David Jones became the Managing Partner of what was then a four office firm.


During 1996, the partners of these two respected firms held discussions over a possible amalgamation. Through these deliberations, it became obvious that an improved service would result to our clients and thus in October 1996, these two firms with over 177 years of service to clients between them, merged to form Jones & Redfearn.


Initially, the new firm was based in the office of Wesley Haslam in St Helens Place, Rhyl. However, in the late 2000, the firm relocated to its present offices at Russell Road and expanded these during 2001.


Jones & Redfearn continues to develop its services to clients as, through its provenance with Wesley Haslam, the firm continues into its third century.

Disclaimer: The information about this Agent is provided by the Agent themselves as an advertisement for their agency services. Rightmove is not endorsing this Agent and makes no warranty as to the accuracy or completeness of the advertisement or any linked or associated information, and Rightmove does not check or verify the accuracy of the content. The information is generated, provided and maintained by Jones & Redfearn, Rhyl. Please contact the Agent directly to obtain further information about their property services.

Fax: 01745 338338
Email agent
This site: Site mapHelpCookiesSafety and securityTerms of UsePrivacy Policy
Major cities and towns in the UK: