It is very important to us to get our customers feedback.

The content on this Microsite has been uploaded by Martin & Co, Camberley. Rightmove Group Limited makes no warranty as to the accuracy or completeness of the content, any queries should be sent directly to Martin & Co, Camberley. Where properties are displayed on a page, this comprises a property advertisement. Rightmove Group Limited who operate the website Rightmove.co.uk makes no warranty as to the accuracy or completeness of the advertisement or any linked or associated information, and Rightmove has no control over the content. These property advertisements do not constitute property particulars. The information is provided and maintained by Martin & Co, Camberley. Please contact the agent directly to obtain any information which may be available under the terms of The Energy Performance of Buildings (Certificates and Inspections) (England and Wales) Regulations 2007 or the Home Report if in relation to a residential property in Scotland and if you have any query over the content.

View all properties for sale from Martin & Co, Camberley 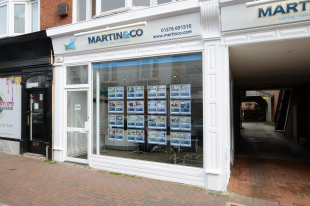 Our approach is all about you! At Martin & Co we have over 25 years experience dealing with property. Whether a landlord, tenant, buyer, seller or and/or an investor, our customers can tailor our Letting and Estate Agency packages to suit their needs.
We have just under 200 offices throughout the UK ready to help you let a property, rent a new home, buy or sell. Contact your local Martin & Co office to see how they can help you.

Martin & Co has been selling houses since 1986. In summer 2012 we launched our new Subscription Sales Service - we provide a 0% sales commission service and the option of advertising on Rightmove and the Martin & Co website for a monthly subscription fee, alongside the Traditional Estate Agency model.

Whether you are an existing landlord with Martin or Co and looking to increase your buy-to-let portfolio, new to the world of property, a first time buyer, or even an existing tenant, Martin & Co can guide you through purchasing your ideal property recognising the different requirements whether this is to be your home or an investment.

Landlords when letting your property with Martin & Co you will benefit from the strength and awareness a national brand brings, in addition to having the opportunity and peace of mind to discuss your personal requirements with knowledgeable local business owners.

At Martin & Co not only do we have a great choice of properties and expert knowledge of the local market, but we also go the extra mile to ensure that the entire process is as hassle free as possible. Property to rent does move quickly so it is best to register with your local Martin & Co office a month or so before you need to move into your new rented home.

Disclaimer: The information about this Agent is provided by the Agent themselves as an advertisement for their agency services. Rightmove is not endorsing this Agent and makes no warranty as to the accuracy or completeness of the advertisement or any linked or associated information, and Rightmove does not check or verify the accuracy of the content. The information is generated, provided and maintained by Martin & Co, Camberley. Please contact the Agent directly to obtain further information about their property services.