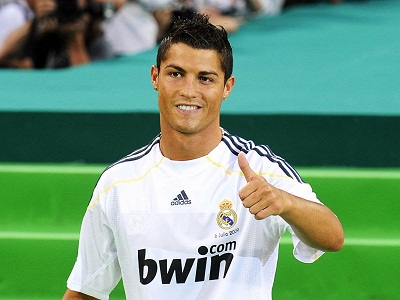 He’s well known for being the most expensive footballer in history and it seems Cristiano Ronaldo was living the life of luxury long before his renowned transfer to Real Madrid.

The Portuguese footballer’s house, that he lived in while playing for Manchester United, is up for sale on Rightmove. The property in Cheshire is on the market for £995,000 and comes complete with five bedrooms, three bathrooms and a one bedroom bungalow to boost.

Have a look inside!

The 27-year-old started his career at Manchester United in 2003 and is thought to have lived in the Stockport home for most of his time at the northern club, until he moved out in 2006. The property boasts fabulous gardens (perfect for a spot of footy) and a large driveway with off road parking for multiple cars (a necessity in the footballer world) all of which is set behind electric gates for privacy and security.

The appeal of the sports star’s former home doesn’t stop there; the pad also includes a 30ft lounge, study/gym and a stunning master bedroom with extensive built-in wardrobes and his-and-her en-suites. What’s more, the house is also said to have been home to defender Jaap Stam and midfielder Jose Kleberson before Ronaldo moved in.