Prepare for an Uprising! – Muse guitarist sells his hometown property 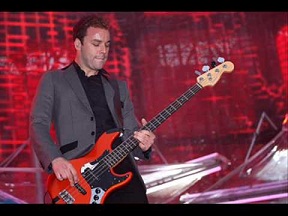 Muse legend, Chris Wolstenholme, has put his seven bedroom home on the market for £895,000. Have a peek here!

The bass guitarist is selling his family home in Teignmouth and has relocated to Foxrock, Dublin with his wife and four children.

The detached property offers easy access to the town centre and seafront yet still manages to remain secluded.  Wolstenholme kitted the property out with high-tech security systems including a wrought iron gate and CCTV to maintain his privacy. The family home has also been extended (no doubt to house the star’s numerous awards) and has been through extensive modernisation and refurbishment which features a balcony overlooking Devon’s Teign Estuary.

Wolstenholme is the last member of Muse to move from the picturesque coastal town where the band grew up and formed the band.

When Muse struck stardom about twelve years ago, the band gradually moved out of Devon. However they are obviously still fond of the surroundings as they have been known to perform homecoming gigs to thousands of fans. The most recent concert was affectionately named ‘Seaside Rendezvous’ and was held to celebrate Muse’s tenth anniversary.

If you fancy moving to the area to take advantage of the beautiful coast or just to make sure you’re around for Muse’s next gig, have a look at some of these pretty properties in Devon.