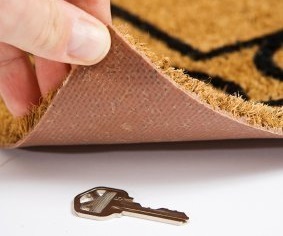 For most of us it is not unusual to still keep up the old tradition of leaving a spare set of keys hidden in the garden in what is considered a ‘good’ hiding place. In fact over 20% of Britons admitted to doing so.

A survey conducted by Keytek™ Locksmiths found that homeowners across the UK, despite years of being advised by the police and government against it, will still leave their keys in a somewhat easily discovered hiding place such as underneath a plant pot or front door mat – an unwanted welcome for any homeowner from the average burglar.

Although this is considered only a small percentage of the population, it is still alarming that 20% of Britons will still leave their keys in what they feel is a secure hiding place at the risk of invalidating their home insurance by leaving the security of their home vulnerable; 2% said they kept a spare set of keys under a plant pot, 6% under a mat, 7% elsewhere in the garden and 6% in the garage or shed. The majority of home insurers profusely advise again this. The AA insurance website clearly states this as a warning to all homeowners, “Don’t hide a spare key outside as burglars know where to look.”

As well as exposing that a significant proportion of homeowners still hide their keys somewhere in the garden, the survey also revealed that 44% of people actually keep their spare set of keys with a neighbour; these statistics give an interesting new outlook on recent debates on whether or not modern Britons are familiar with their neighbours. Perhaps we aren’t all as isolated as we appear to be?

Surprisingly only a small percentage of survey participants said that they use a Key Safe to store their spare set of keys. For a relatively small cost it is advisable to have a Key Safe fitted to the outside of your home by an experienced locksmith, where you can safely and securely store your keys without having to rely on a neighbour or family member to look after them.

This blog post was a guest post from Keytek™ Locksmiths, the UK’s largest national provider of domestic and commercial locksmith services.