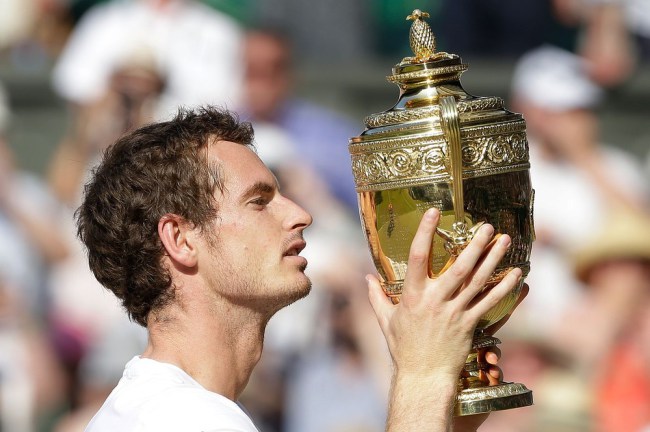 What were you doing on Sunday, July 7th while Britain’s Andy Murray was playing in his second Wimbledon final? For hundreds of thousands of people the answer was that they were searching for their new dream home on Rightmove.

However, new research reveals that the conclusion of the final proved so compelling that home-movers put down their tablets, phones and laptops to give it their undivided attention. The temporary distraction from Rightmove – the seventh busiest website in the UK* – resulted in Rightmove’s biggest ever daily dip in traffic.

“The rise in the popularity of consuming media using different devices at the same time – so-called dual and triple screening – means that we are well used to seeing high levels of traffic on Rightmove even during events that really capture the nation’s attention, like the Wimbledon final and The Olympics. The popularity of our mobile platforms mean that people can be looking for their dream home on Rightmove on a tablet or smartphone and taking in the Wimbledon final on television simultaneously. However, for around a twenty minute period around the conclusion of the Wimbledon final we saw traffic levels on mobile devices fall by nearly half from the peak hit earlier in the day and website traffic fall by about a third. It’s the single biggest traffic ‘hit’ we’ve ever seen!”


Home-hunter search patterns have changed a great deal in recent years, with the immediacy and convenience of tablets and smartphones responsible for a massive increase in traffic across Rightmove’s mobile platforms. More than 30% of all search activity on Rightmove now happens on one or other of its mobile platforms, and this often rises above 40% on a weekend with exceptional summer weather. 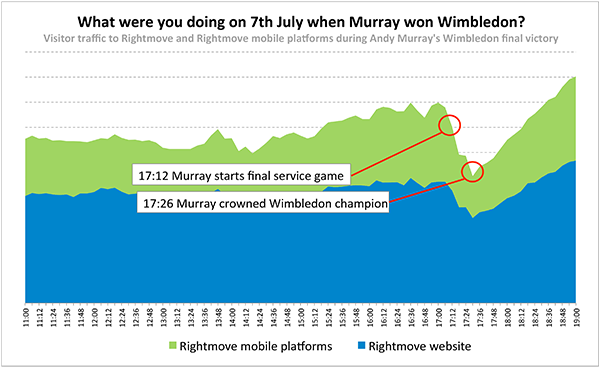 “Fine weather can affect our traffic. Though overall levels stay broadly the same, a higher proportion comes from tablets and smartphones as people take advantage of the fact they can take these devices with them to the garden, park or pub. However, Sunday was truly exceptional in terms of the impact of one single event. We saw something similar on ‘Super Saturday’ during the Olympics, when in space of an hour we saw three pronounced dips in traffic as people tuned in to see Jess Ennis, Greg Rutherford and Mo Farah win Olympic gold. While we obviously congratulate Andy Murray wholeheartedly, we were relieved to see that traffic levels on mobile and the Rightmove website returned to normal within an hour of him lifting the trophy!”